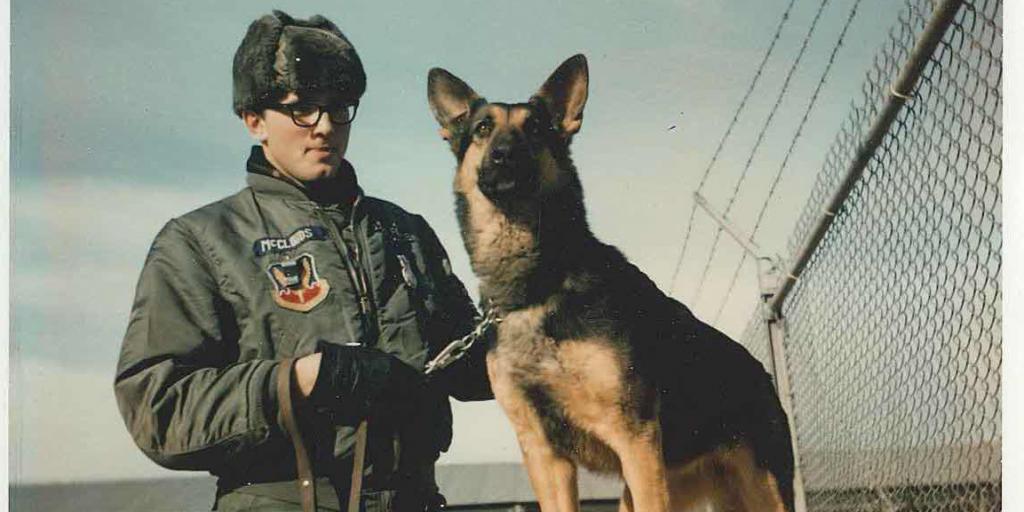 PITTSBURGH -- It’s been more than four years since volunteer and Vietnam Veteran Edward McClouds walked into VA Pittsburgh Healthcare System’s Oakland hospital and sensed it was where he needed to be.

“When I walked through the door it was like something struck me. This is where you belong if you’re going to volunteer. There’s a camaraderie that you get between everybody in here because a majority of the people have gone through the same thing,” McClouds said.

Three mornings a week you’ll find McClouds on the inpatient floors offering coffee to Veterans and their families. He has talked with hundreds of Veteran patients from all service eras and branches but has yet to meet another Veteran who served as a dog handler, as he did during the Vietnam War.

He became a handler shortly after his first assignment with security police at Lockbourne Air Force Base, Ohio. There, in 1969, he met a handler who told him that more handlers were needed because so many had deployed to Vietnam.

“I said, ‘I love dogs.’ I’ve always had a dog … I put my name in, and they sent me to dog school,” McClouds said. “The Air Force didn’t care if you had qualifications. It was: ‘Do you want to get into it?’”

McClouds had training at Lackland Air Force Base where he was assigned a dog and learned everything from basic obedience commands like “sit and stay” to wearing full-body padding and letting another handler’s dog attack him.

In 1970 he deployed to Thailand’s Nakhon Phanom (NKP) Royal Thai Air Force Base, where he was paired with a German shepherd named Ted, aka Ted 6-O-M-6, for the serial number tattooed in its ear.

“He was extremely aggressive -- very grouchy. But we loved each other,” McClouds recalls. “It took me seven days to even get into the kennel. I would sit outside for eight hours or longer. I’d call him up to the fence, and he’d want to rip me apart.”

Three days into that first week McClouds was able to scratch Ted’s ear through the chain-link fence. By the seventh day he got a chain on the dog and let him run in the training area.

“It was a big area … all fenced in. He just ran around and had the most glorious time.” McClouds said. “Then the first sergeant came out and asked me, ‘Where’s your dog?’ I told him in the training area, and he said, ‘That’s Ted. You’re never going to get him back.’”

McClouds did get Ted back, but it took four hours to get him chained and kenneled. A week later, McClouds was standing guard mount in the jungle outside of NPK with an AR-15 and Ted, one of the Vietnam War’s most lethal and important defensive weapons.

“Our mission was to detect -- or stop -- anything from going in there. We would go out in the jungle and walk our designated sectors till something happened. Then we’d call central control, who would notify the perimeter patrol and dusty (helicopters) for their response and back up,” McClouds said.

Handlers also had to be wary of North Vietnamese sympathizers who could reap a handsome bounty for the tattooed ear of U.S. sentry dogs — and even more for a working dog’s collar.

“I don’t want to take away from those troops who experienced heavy combat ... But I want people to know there was another line of defense out there that was the first line of defense on the bases,” McClouds said.

After a year serving at NKP, McClouds returned to the states to finish his enlistment. Soon after, he learned that Ted had severely injured his next handler, resulting in the dog being euthanized.

“These dogs were something to be afraid of because they were trained for only one thing, and that was to attack,” McClouds said. Still, he believes, many handlers, including himself, felt guilt for leaving their dogs behind. “At least in my case, that is something that will always bother me.”

One bright spot for McClouds is the evolution in using military dogs. They are more specialized in the detection of explosives and drugs and can often be adopted by their handlers after their service.

“There are so many other facets to these animals that we’ve overlooked. Now you see them as PTSD therapy dogs and service dogs. It’s like it’s right in front of your face. Most people like to see a dog -- it’s calming and it’s relaxing,” McClouds said.

Writer’s Notes:
1. Lockbourne Air Force Base is now Rickenbacker Air National Guard Base.
2.  McClouds served with the 56th Special Police Squadron at NKP Royal Thai Air Force Base, which is now known as NKP Royal Thai Navy Base.
3. Lackland Air Force Base is now known as Joint Base San Antonio-Lackland.
4. Of the 4,000 dog handlers and dogs deployed to Vietnam, approximately 270 handlers and 500 dogs were killed in action, according to McClouds. McClouds is a member of the Vietnam Dog Handler Association, which estimates less than 300 of the dogs used during the war returned to the U.S. Most dogs were either euthanized or transferred to South Vietnamese and Thai military.