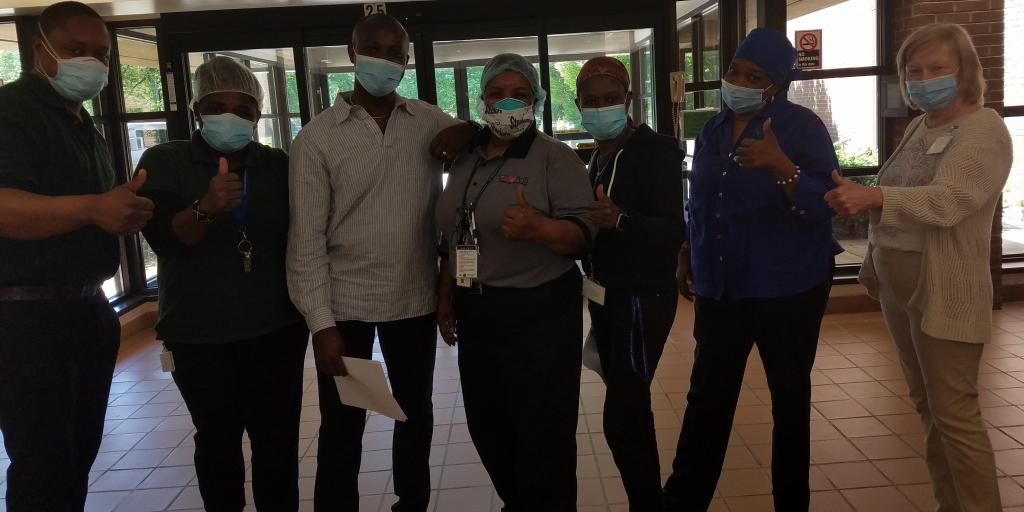 Navy Veteran Mary Johnson faced one of the biggest challenges of her six-year career with the Department of Veterans Affairs (VA) when she volunteered to help a demoralized nursing home staff get back on its feet and save Veterans' lives during the coronavirus pandemic.

Johnson, 62, of Pittsburgh, spent three weeks in May at the New Jersey State Veterans Nursing Home in Paramus.

DEMPS is VA's  main deployment program for clinical and non-clinical staff to an emergency or disaster. It is an integral part of VA's fourth mission – to help non-VA medical facilities in need.

Before volunteering for DEMPS, Johnson oversaw the conversion of a vacated wing on VA Pittsburgh's H.J. Heinz III campus into a COVID-19 unit.

When EMS was finished, doctors, nurses, chaplains and other VA Pittsburgh staff who toured the unit "couldn't believe what we had done – they wished we had taken photos before we started, for before and after photos," said Johnson.

With the success of that project in mind, Johnson was ready when the call came for volunteers to help in New Jersey. She  and her team had worked magic at the Heinz facility, but the uncertainty of what she would  face in New Jersey was something altogether more challenging.

"People were dying there," Johnson said. "Nothing could really prepare you for what you were going to experience. The staff was broken down there. People on the outside were calling them murderers."

But with her years of experience managing people, Johnson knew the first thing she had to do was restore pride and purpose to the demoralized staff.

"I had to tell their housekeeping staff they weren't losers, that they were still in their patients' corner, and that people on the outside really didn't know their situation, or the circumstances."

Johnson then turned her attention to educating staff on ways to prevent cross-contamination.

"It's like mopping one room with the same bucket and a mop and then going to the next room and using the same dirty mop and water," Johnson said. "They had to learn that they needed a clean mop for the next job; clean goes with clean and dirty goes with dirty."

The staff had also been spraying bleach on surfaces and immediately wiping them down, but that disinfection method was ineffective. The bleach wasn't left on surfaces long enough to kill viruses, bacteria and fungi. Using spray bottles also spread irritating bleach fumes throughout the facility.

Johnson had the facility replace the bleach solution with a different, more effective disinfectant that kills the virus faster and is safer for staff, patients and the environment.

"They also had to learn about dwell time – the time it takes for the chemical to kill the virus, and why you have to leave things wet for it to work," said Johnson.

But the biggest thing the staff didn't have was a standard operating procedure (SOP) to guide their work. Johnson crafted one for the facility, as well as another to be used by National Guardsmen who  had been called in to assist.

Johnson has since returned to VA Pittsburgh, but she and the nursing home staff stay in touch to talk about the best ways to keep COVID-19 at bay.

Johnson said she would tell anyone volunteering for DEMPS duty to understand that they need to be mentors, not task masters.

"It was a humbling experience," Johnson said. "In the midst of everything that was happening, the staff was still smiling and willing to learn. The important thing that we all realized is that one day you may be in that bed, and you may have to depend on other people doing the same job you do. In the end, it's not about us – it's about the patient."