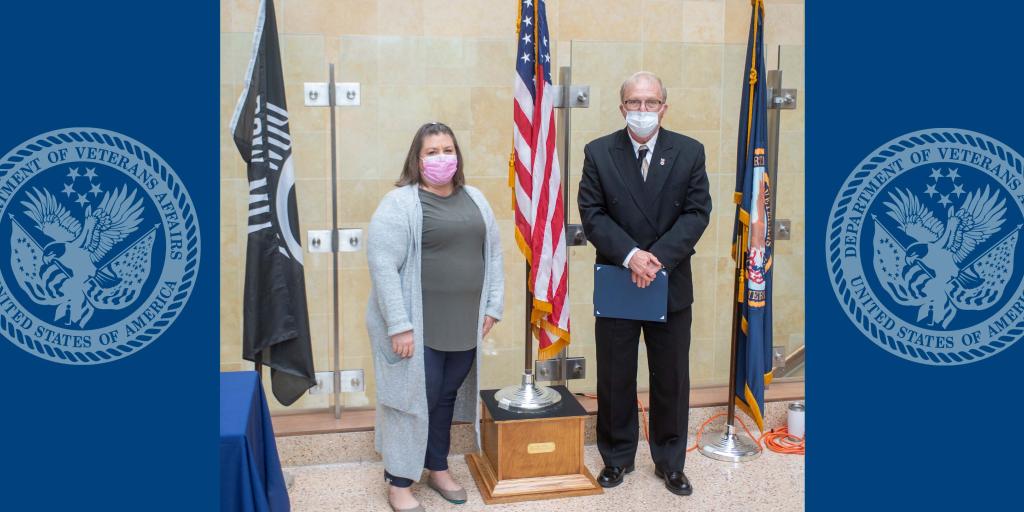 A Vietnam Veteran whose son died while serving with the Army in Iraq used his carpentry skills to ensure his family’s sacrifice is forever remembered.

A handcrafted wooden base Fred Hunter built in memory of his son Matthew David Hunter now holds a U.S. flag in the atrium at VA Pittsburgh Healthcare System’s University Drive campus. Fred Hunter donated the stand to VA Pittsburgh and another just like it to the Belmont County Community Based Outpatient Clinic in St. Clairsville, Ohio.

Sgt. Matthew Hunter, 31, died Jan. 23, 2006, during combat operations in Iraq when a roadside bomb detonated near his dismounted patrol.

A combat field medic, Matthew Hunter enlisted in the Army Reserve in 1992, then transitioned to active duty in 1996. At the time of his death, the West Virginia native was serving with the 1st Battalion, 502nd Infantry Regiment, 2nd Brigade Combat Team, 101st Airborne Division (Air Assault) out of Fort Campbell, Kentucky.

“I cried so much that for many years after, I didn’t have any tears,” said Fred Hunter, 75, of Glen Dale, West Virginia, on the loss of his eldest son. “It took all of my tears out of my body.”

Fred Hunter said growing up, his son wanted to help others, which drove his decision to become an Army medic. His son dreamed of becoming a veterinarian and had asked his family to send him supplies in Iraq to care for stray dogs.

Fred Hunter is a Navy Veteran who served aboard the aircraft carrier USS Intrepid in an area known as Yankee Station during the Vietnam War.

After donating the first stand to the Belmont clinic, Fred Hunter decided during a visit to the University Drive campus to build a second stand for VA Pittsburgh. He donated the stand, which is fashioned from birch plywood with oak veneer edges and oak crown molding around the base, during a formal ceremony in the campus’s atrium.

“I’m quite humbled the VA accepted something I built,” he said. “I cannot think of anyone other than Matthew to hold that flag up.”

“Mr. Hunter, we are so honored and humbled to have this beautiful tribute to your son, Matthew, in our atrium,” Boehm said during the ceremony. “I can think of no greater way to remember and honor Matthew Hunter and all servicemembers killed in action than a strong foundation beneath this ultimate symbol of freedom and the cost of war.”

Boehm thanked Fred Hunter for his service in Vietnam, welcomed him home and presented him with a Vietnam Veteran Lapel Pin. The pins are part of the 50th Commemoration of the Vietnam War. All living U.S. Veterans who served on active duty in the U.S. Armed Forces at any time during the period of Nov. 1, 1955, to May 15, 1975, regardless of location, are eligible to receive one lapel pin.

VA staff, Fred Hunter said, were the first to welcome him home from Vietnam.

“No one has ever done that before the VA, not even when I got home from Vietnam,” Fred Hunter said.

Fred Hunter said the flag-holder donations are also a way for him to thank his VAPHS providers -- both in Pittsburgh and at the Belmont clinic where he receives care. He is particularly thankful for VA Pittsburgh psychiatrist Dr. Joseph Fetchko, who he said helped him cope with the loss of his son.

“You never want to bury your child,” he said. “It cuts your heart right out. Dr. Fetchko helped me so much; he helped me heal my heart.”