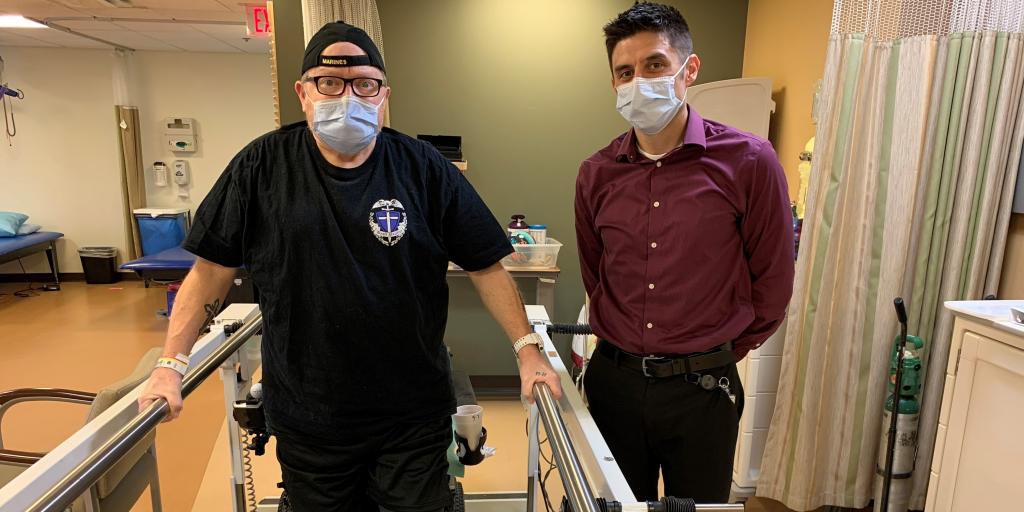 Standing eye to eye for the first time ever with his VA Pittsburgh Healthcare System prosthetist, Marine Corps Veteran Ronald Slaughter exclaimed, “You just made my year and it’s only April!”

The emotional Veteran had just received a below-the-knee prosthesis several weeks earlier than anticipated because it was fabricated on-site at VA Pittsburgh using a new prosthetic product. The new product dramatically reduces the time between amputation and the start of rehabilitation.

Traditionally, patients are seen in clinic six to eight weeks after surgery to be fitted for a prosthesis, said Andrew Chambers, the VA Pittsburgh orthotist/prosthetist who worked with Slaughter. VA then contracts with a vendor to make the prosthesis. The vendor delivers the prosthesis in four to six weeks, at which time the patient begins gait training.

With the new prosthetic product, Chambers reduced the wait time between Slaughter’s fitting and the start of gait training to one week. He saw Slaughter in clinic on a Thursday in April and ordered supplies needed to make the prosthesis. Slaughter returned the following Thursday, where Chambers measured him and began to fabricate the prosthesis.

Three hours later, the prosthesis was ready for Slaughter to use to begin gait training.

“He arrived for his appointment at two and he was standing by five,” Chambers said. “It was really exciting for everyone. To do it in three hours is kind of flexing VA muscle.”

Chambers supports Veterans who receive care at five VA medical centers throughout western Pennsylvania in VISN 4. He learned about the new product for below-the-knee amputations during a national VA training in March. After speaking with other VA prosthetists who implemented it in their clinics, Chambers was inspired to bring it home to VA Pittsburgh.

“It seemed worth a shot, although there is a learning curve to this,” Chambers said.

Chambers said VA Pittsburgh began to explore obtaining the new product months ago. He received strong backing from his department supervisors, as well as financial support to purchase a toolkit required to fit and fabricate the new prostheses.

Manufacturing the Veteran’s prosthetic leg in house cost about $1,600, saving VA Pittsburgh more than $5,000 that would otherwise have been paid to a vendor for fabrication.

“We already got our money back for it and I really appreciated that support from my boss,” Chambers said.

Chambers and his colleagues anticipate expanding the technology to serve Veterans with above-the-knee amputations, as well.

“I’m excited about this,” he said. “We’re looking forward to growing the orthotics and prosthetics clinic, hiring more support here in Pittsburgh and in the region, and becoming more self-sufficient.”