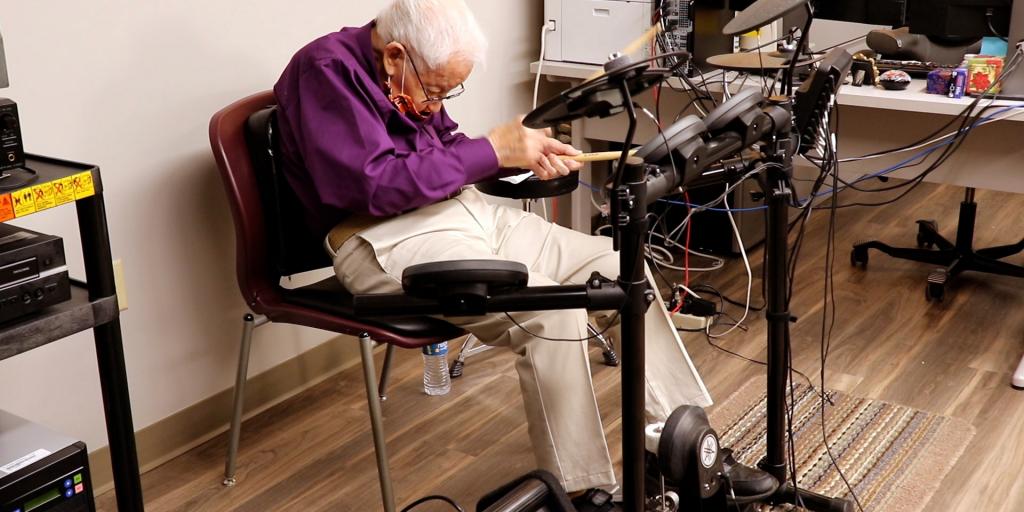 Korean War Veteran Marvin Daniel takes part in music therapy sessions for his PTSD. Daniel was a rifleman in the Battle of the Pusan Perimeter.
By Rosaire Bushey, Public Affairs Officer
December 17, 2021

During the Korean War Marvin Daniel was a rifleman in the Army. Now, with the war 70 years in the past, the man who earned two Bronze Stars still deals with the mental and emotional fallout of his service – partially through hitting things with sticks.

During the Korean War Marvin Daniel was a rifleman in the Army. Now, with the war 70 years in the past, the man who earned two Bronze Stars still deals with the mental and emotional fallout of his service – partially through hitting things with sticks.

Daniel is enrolled in the Salem VA Health Care System’s Music Therapy Program, and treated by Board Certified Music Therapist Lisbeth ‘Beth’ Woodward.  The program uses music to aid patients who suffer from a variety of neurologic and mental health diagnoses such as stroke, Traumatic Brain Injury, various dementia’s, depression, anxiety, and PTSD.

Daniel doesn’t talk much about his service in Korea, saying only, “I was in the Pusan perimeter at the beginning of the war, and I won a couple medals for being in that group. It was a harsh thing that we were … ” His voice tails off, but he recovers quickly, continuing, “Everyone is glad it was settled. I understand the capitol, Seoul is a real beautiful sight to see, but I don’t have any desire to go back and look at it. It brings back some harsh memories of the losses we had. I try to forget it rather than talking.”

As if on cue, Woodward on the piano and her intern on the bass guitar pick up a tune and run through an old song. Daniel doesn’t miss a beat on the small, electronic drum kit. He finishes with a cymbal crash, and jokes that in Japan he was near the headquarters of US General Douglas MacArthur, and when the general drove by, he’d salute, and the general would return the salute. “So, I tell everyone that General MacArthur saluted me.”

It was in a group PTSD session that a doctor at Salem suggested music therapy for Daniel.

“The goals of music therapy depend on the needs of the Veteran,” Woodward said. “For instance, we are getting ready to start a harmonica program for patients with COPD and asthma, to help improve their lung capacity.”

Music therapy, while broad in purpose, works to help Veterans cope with anxiety and depression.

During their sessions, patients often learn about the psychology of music to help them understand their unique and individual responses to music stimuli.

“Some people experience triggers in response to music. Perhaps a genre of music was used a lot during their military or combat experiences, so we work on teaching them how they personally respond to music, what components of the music they respond to, and how they can create their own music compilations for decreasing anxiety and increasing the relaxation response,” Woodward said.

Woodward knows all people have music preferences that lift them up, or calm them down, that mellow them out, or that make them joyful. She also realizes it’s not the same for everyone.

“There’s a lot of research on how music reacts with your body – decreasing your heart rate and such – and some people think you need calm, soothing music to relax, but that’s not true. Some individuals like heavy metal and that may be relaxing for them; in fact, they may react with more anxiety to music that is more traditionally associated with relaxation.”

Veterans who are interested in music therapy can get a referral from a psychiatrist, psychologist, primary care doctor, nurse practitioner, physician’s assistant, or social worker.

“Music therapists provide treatment across the realm,” Woodward said. “We utilize music to address cognitive, emotional, physical, and social needs of our clients. We work with both rehabilitation and wellness frameworks– we will adapt to the patient’s needs and they don’t need to know anything about music.”

“I thought music therapy was maybe listening to records, but it sounded inviting and it’s fun for me to try to beat out some noise here,” Daniel said. “It almost makes me want to run, but my feet tell me I better not do that; but the music lifts my mood and I enjoy it immensely.”