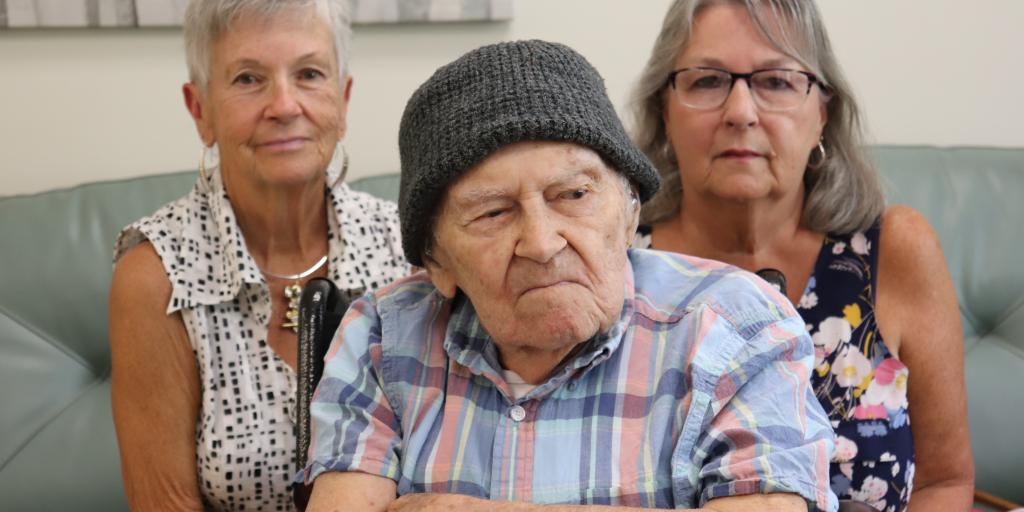 After being inducted in April 1943, Walter Brooks was assigned as a rifleman and an ammunition bearer. From training through to the end of the war, if there was mischief to be found, Brooks was likely in the center of it.

Editor’s note: This interview with Walter Brooks was recorded on Sept. 2, 2022, five months before the World War II Veteran and POW’s 100th birthday. Sadly, Mr. Brooks passed away Oct. 26, 2022. His family asked that we publish his story to celebrate his near-century of life and service.

In a spacious and well-lit seating area of a Lynchburg nursing home, down the hall from a busy dining area, Walter Brooks is waiting, surrounded by his two daughters and a son-in-law. His voice is raspy and breathy, but the southern twang is evident. When he laughs, which is often, the smile makes its way to his eyes.

In February 2023, Brooks would have turned 100 and when he thinks about his life, there is a short time period that gets the most attention.

Born Feb. 12, 1923, Brooks was a Veneer Matcher with a furniture company near Altavista, Virginia, and in 1943 the US Army invited him to join the fight in Europe.

After being inducted in April of that year, he was assigned as a rifleman and an ammunition bearer. From training through to the end of the war, if there was mischief to be found, Brooks was likely in the center of it.

During training, about 15 miles outside of Nashville, Tennessee, Brooks convinced two sergeants to go to town on a Saturday night. “They thought it was dodgy, but we made it and got into a club and the man making music introduced us,” he said. “We had the biggest time and thumbed back.”

For their efforts in leaving base without permission and going to town, the two sergeants with Brooks were relieved of their rank and busted to private. Brooks, who held no rank at the time, was made to dig a 6'x6'x6' hole – one a day, for a week.

“I tell people, if I hadn’t done that, I’d never have been able to go to Nashville on a Saturday night.”
He regrets nothing.

During company marches, Brooks carried another soldier’s rifle because it was heavy, and the man asked him to. The men in the company wondered where he got his stamina and he told them it was because he used to plow with two mules a day – because he’d "wear one of ‘em out!"

From training, Brooks made his way to the European Theater of Operations where he arrived May 29, 1944 as an infantryman.

While in Europe, he spent time with a heavy machine gun squad. In all, he served in France, Belgium, and Germany including the Battle for Normandy, the St. Lo break-through, and in the Hurtgen Forest where he was eventually captured.

His daughter, Jeanette Napier, sits by his side, a small remote in her hand that she uses to help amplify her voice so he can hear her properly. Behind Brooks his daughter Shirley Childress nods and smiles as she hears him talk about his service.

Napier and Childress take turns prompting him with questions, knowing what the answers are, or should be. At 99, Brooks’ stories can sometimes merge with other stories from other times. His daughters help him stay on track.

“What did you do in the war?” Napier asks.

“I used an eehehheheeheh,” Brooks says, holding up his hands as straight as he can and imitating a machine gun. His daughters laugh and Jeanette asks if he was good at it.

Without pause or arrogance, Brooks responds, “I was the best.”

He recounts his time in combat carefully, noting the unexpected, and sometimes macabre nature of the conflict going on around him.

In Cherbourg, France, Brooks found a car with the keys in it, his daughter relates. “He rode it all over the place and at the end of the tour (before they moved forward), he asked his officers about his car. His lieutenant told him to leave it where he found it. ‘We can’t fight a war in a car,’ he was told. “He wasn’t happy about having to leave that car.”

Without the car, Brooks moved largely on foot. “We was going around fighting and we were behind tanks. We got up there and there was a man laying there by a bridge – everything but his boots showing – he was cut in half at that bridge,” Brooks said. “Old man blowing that bridge yells out, ‘hey, he ain’t half the man he used to be.’ I said to myself, ‘how cruel can a man be? Probably his mom meant as much to him as ours did to us.

“We knew that fighting you didn’t have no mercy on nobody. He’s (one of his Army comrades) telling me about his wife – he says, ‘my wife told me she hoped to God I got killed and didn’t get back.’ The next morning, we went just a little way and a shell come in and blowed him all to pieces. I said to myself, ‘well, she got her wish – he’s gone.’

Turning quickly from the memory, Brooks smiles and explains how he helped himself keep perspective during the war. “There was a woman and a little kid, and I gave her some chewing gum. I always had chewing gum with me, and I stick it in my shirt pocket and give it to little children.”

As good as he was at his job though, the chaos of war had other plans. During a battle Brooks’ foot was, in his words, ‘blown all to pieces’ and he was taken prisoner. He recounts his capture by a German soldier with something akin to fondness.

“We run into … a German position and I hit the ground. (Later, a German) he come and walked over to the hole I was in, and he come on up. I asked him how long he’d been fighting us, and he said a good while. I asked, how many have you killed? He wouldn’t answer. I had a pistol in my hand, and said, ‘oh, boy, you try something and you’re not going to leave with your head.’ I said to him, ‘that’s a pretty little gun you got there in your hands,’ and he hands it to me. I said to him, ‘you ain’t gonna kill me?’ And he says, ‘no, I ain’t gonna kill you. I’m gonna stay with you just as long as I can.’ And we stayed there until his Army come. Then, in his perfect English, he says, ‘don’t worry, they’re not gonna kill you'.”

The Germans carried him out of the hole and took him to a prisoner of war camp. His mother later received two postcards. The first from her son dated Jan. 2, 1945:

“Hello mother, just a card to say hello and to let you know that I am just fine and hope you and all the same. Mother tell Ernest and all the rest I said hello. Well mother I will say goodby. And love to all, Walter.”
The plain white ‘postkarte’ bore the return address of the prisoner of war camp (Kriegsgefangenenlager) Stalag VI G.

The second telegram arrived in March from Washington, DC. It read:

“Report just received through the International Red Cross states that your son Private First Class Walter H. Brooks is a prisoner of war of the German government."

Fortunately for Brooks, with the war winding down, his time as a POW was short-lived, and from his wheelchair in the hallway his story moves on to the end of the war, after he’d been sent to England and placed in quarantine. While there, the Germans surrendered, ending the war in Europe.

“That night, I went to town, and that’s when I got in trouble. The next morning, I thought I had gotten away with it, but the colonel comes to the door and says, ‘Walter, they want to see you in the office.’ I thought, ‘oh oh, that’s it.’

I got in there and the old man was sitting in a chair, and he says, ‘are you’se the boy that likes to slip off and go to town?’ And I said, no, not really, I don’t slip off. He said, ‘how come you didn’t?’

“I said, well I’ll tell you; I had to do a little switching around to get the gate man to say he’d let me out. (The general) says, ‘did you really do that?’ I said yeah, and he said, ‘well, go ahead then’ and he let me go.”

Not wanting to be outwitted by a private, the general had Brooks’ clothes taken away and they weren’t given back to him until just before he was put on a ship to return to the United States.

After being discharged from the Army Oct. 19, 1945, Brooks returned home to Alta Vista where his duffel bag was stolen with all his medals and paperwork. Despite that, he spent all of his nearly 100 years within 25 miles of the place where he was born and raised, with the notable exception of the two years, seven months, and eleven days he spent as part of America’s Greatest Generation, fighting to maintain freedom.