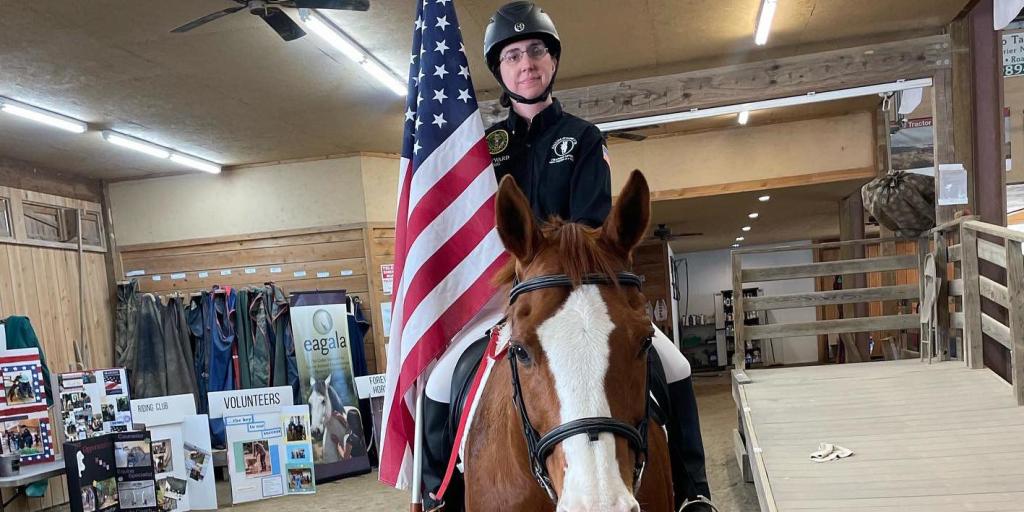 For Seyward McKinney, joining the Army was a calling - something she realized she needed to do from the moment she took a school trip to New York City.

For Seyward McKinney, joining the Army was a calling - something she realized she needed to do from the moment she took a school trip to New York City. Growing up locally and going to Glenvar High School, McKinney was active in school groups and found herself in New York prior to the events of 9-11. She was able to go back after 2001.

“I’ve been in both buildings after and there was dirt and stuff on the ground – but they said it was ashes of people and everything, so it was really hard to see that; and because of that, I wanted to join the Army.

As an enlisted surgical technician, Seyward found herself in Iraq for eight months, working on patients – both American and Iraqi.

“It was a great experience and I got to do things I normally wouldn’t get to do,” she said. “We were preparing to take out someone’s appendix and the doctor was like, ‘are you ready?’ and I said, ‘yeah, here’s the knife’ and he hands it back to me and lets me do the whole surgery while he assisted.”

In addition to working on American servicemembers, she also recalled another patient who was more well-known while working in Baghdad’s Green Zone in 2004.

“Saddam Hussein was working out in his jail cell and pulled some muscles, so we had to do a hernia repair on him.”

But McKinney’s story with repairing injuries was only just beginning. Her own injuries began after returning to the United States when, in 2009 while at Fort Sam Houston, Texas she wasn’t feeling well.

“I started getting headaches and they did a CAT scan and found an arteriovenous malformation.”

What the doctors found was a twisted mass of blood vessels connecting McKinney’s arteries and veins that were disrupting normal blood flow. After five surgeries, three related procedures and two radiation treatments, McKinney hoped she was out of the woods.

Nine days later she had a stroke.

“My parents had just retired and were on their way for a vacation, so fortunately they were with me,” she said. “We ended up at Walter Reed.”

McKinney spent two years at Walter Reed Army National Military Medical Center and while she was there, she was introduced to horses.

“I got in touch with some rehabilitation people, and they told me about this place at Arlington Cemetery, so I got to go there and ride horses. I’d never ridden horses before, so I did that and the person in charge there told me about Healing Strides.”

Begun in 2011 Healing Strides is a non-profit in Boones Mill, Virginia that offers equestrian therapy for Veterans and others. The program works with licensed clinical social workers and mental health professionals along with professional trainers to teach Veterans how to ride and to understand the varied benefits of working with the animals.

Ricki McKinney, Seyward’s mother and Regent for the Fort Lewis Chapter of the Daughters of the American Revolution said, “Seyward travels to Healing Strides three times a week supported by the Wounded Warrior Independence Program, supplemented by her father or me when needed.”

“I think one of the things Veterans get when coming to Healing Strides is a big relief from PTSD. Just to have a one-on-one with the horses, to be able to talk to them, it relieves a lot of stress. It helps them emotionally, but also physically as riding builds core strength, leg strength and really helps in your day-to-day living.”

For the retired army staff sergeant, being with other Veterans is a helpful experience.

“Hanging out with other Veterans, not only when we’re on the horses, but just when you need someone to talk to, you always have someone who knows your story and who has been there – who has had that experience. After getting injured you don’t really have as many friends as you want to have – no one really talks to you, so when I’m here I always feel that camaraderie. Everyone asks me how my day is and makes sure I’m doing ok. It’s a great organization and I’m really glad to be a part of it.”

But there is an aspect to working with horses that goes beyond fun or relief.

“I have a friend who was in the Army as well and he went to talk to the horses,” McKinney said. “That night he was going to go home and shoot himself. But because of an experience he had here, with a horse, he didn’t feel like he needed to do that.”

Carol Young, the CEO of Healing Strides smiles as Seyward mentions her friend. In her more than 10 years with the organization she has plenty of stories to tell of Veterans who have left the program better than when they arrived.

“In 2011 we had our first Veteran walk through the doors. He had done six tours in Afghanistan, and he walked in not knowing what to do. I asked if he could drive a tractor and he said, ‘yes, ma’am.’ So, he mowed our field. He came back every day for six weeks, from 9 to 5 every day and was constantly helping. He learned how to ride and no matter what I said, his answer was, ‘yes, ma’am.’

“After he learned to ride, he came to me and said, ‘I have a daughter, she’s 11 years old and she’s afraid of me. Do you think that if she came down here and saw me with the horses, I think she wouldn’t be afraid? Would that be ok?” I said, ‘yes, sir’.”

The Veteran’s daughter did come to visit and the two were able to build trust.

For McKinney, horses have opened up a new outlet for her well being and created a goal – to be a Paralympic Equestrian athlete. The training will take several years, and she’s already been involved in several shows and competitions and said she is working with trainers on a long-term Paralympic plan.