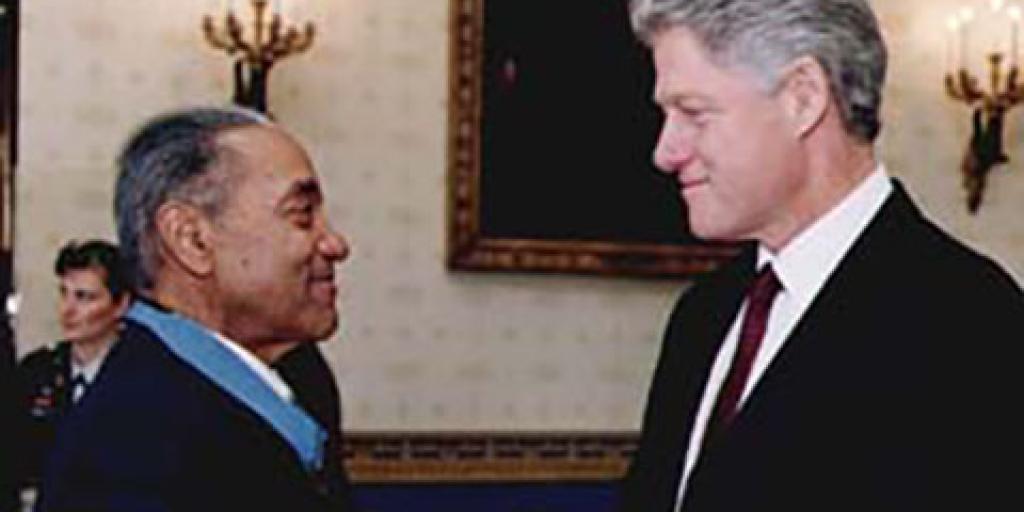 Of the seven men whom Salt Lake City VA’s streets are named after, only one is African American: Vernon Joseph Baker.

History writes Baker in its pages as a hero; and for his deeds, his name stands immortalized at our medical center. But his role in the war – the storming of a Nazi castle – the Medal of Honor he received decades later – almost didn’t happen.

Born Dec. 17, 1919, in Cheyenne, Wyoming, Baker was among only 12 Black families there at the time. When he was 4, everything changed.

An auto accident killed his parents. Orphaned, Baker and his sisters were sent to live with their nearby grandparents.

Angry and intemperate, the young Baker developed a strained relationship with his grandmother. By the time he was 10, things got so bad he was sent to Father Flanagan’s Boy’s Town children’s home in Nebraska.

“At the time Vernon came to Boy’s Town, the Midwest was going through the Great Depression and the Dust Bowl,” Boy’s Town campus historian Thomas Lynch said. “Families were breaking up due to the economic conditions. It was pretty desperate times.”

As the Dust Bowl persisted, more crops died. Eventually, the children had to subsist on nothing but eggplant. For three years Baker held out, enduring some of the nation’s leanest times.

“Homeless children filled the road in this part of the Midwest,” Lynch said. “Every day, five to 10 boys would wander into the village asking to stay there.”

When the money ran out, Father Flanagan was forced to send Baker and others back home.

Finishing high school while staying with an aunt in Iowa, Baker found the prospects for a young Black man in post-depression America, dim. Toiling a series of dead-end jobs, Baker realized that if he wanted any sort of future, he had to do something drastic.

In a way, Baker fought two wars: one against the Nazis abroad and one against institutional racism at home. It was only by sheer persistence that he even joined the Army.

As the story goes, Baker walked into a local Army recruiter’s office and asked about enlisting. The recruiter replied, “We ain’t got no quotas for you people.”

Later that year, he went back. A different recruiter was working. Asked what he wanted to do, Baker told the recruiter, “quartermaster.” Hearing this, the recruiter wrote “infantry.”

“I didn’t say anything because I was going to get in,” reports say.

Arriving at Camp Wolters, Texas, it wasn’t long before Baker experienced southern inhospitality. While boarding a bus, the driver shouted a racial slur and told Baker to, “get to the back of the bus where you belong,” reports say.

Racism was more open at the time, and so burying his anger, Baker did his best to “fit in” as his grandfather once advised him. He trained with a segregated unit, shopped at Black stores, and kept his head down.

After basic training, Baker landed a job as a supply sergeant, an easy gig he later recalled. For a minute, things were good.

Soon he was off to war.

In 1944, Baker was assigned to the 92nd Infantry Division’s 370th Regiment, an all-Black “Buffalo” unit where white officers held senior positions. The men were headed into a mountainous region of Nazi-occupied Italy known for its high casualties.

“In preparing for combat, Baker studied past missions and every manual he could find. For weeks, the platoon trained in an extinct volcano crater outside Naples,” Kingseed wrote. “Baker later recalled that if anything, ‘he got too close’ to the men, acting as their mother and father, reading their letters to ... develop the type of teamwork that he knew was essential for survival.”

On paper, the men were ready. But paper doesn’t shoot back.

While on an October night patrol raiding a hillside house, things went south. The battle left Baker shot in the arm and three Americans dead.

Sent to a segregated hospital, it took Baker three months to recover. In December, he returned to his unit as the company’s senior-most officer until three white officers arrived a few months later.

A big plan was in the works.

The Buffaloes were to press into the Gothic Line – to an area Italians referred to as the “Triangle of Death.” The objective: Castle Aghinolfi, a fortified German stronghold in Italy’s northern Apennine Mountains.

By all accounts the castle was impenetrable: the three previous attacks on the castle ended with massive casualties.

Now, leading a company where 70 percent of the soldiers had little to no combat experience, Baker had to do what others could not.

Before dawn on April 5, 1945, 1st Lt. Baker prepared for what could be his final mission.

“Awakened at 3 A.M., Baker discarded his combat helmet and … donned his dress uniform and his customary wool helmet liner,” Kingseed wrote. “The day foreshadowed death, and if Baker was going to die, he “wanted to go up sharp.”

Leading Weapons Platoon, C Company, 1st Battalion, 370th Infantry toward the castle 2 miles away, Baker closed in on the enemy.

“Arriving before the rest of the company, Baker, an avid hunter, spied an observation post in the distance,” Baker’s Medal of Honor citation says. “Well-aware that if the Germans spotted them his men would be attacked, Baker crawled to the opening … stuck his M-1 into the slit and emptied the clip, killing the observation post's two occupants.”

From there, Baker crept up to a machine gun nest where two Nazis were eating breakfast. Baker ensured it was their last.

Alerted by the fighting, the enemy shelled the Americans with heavy mortars. Exposed on the mountain, the Americans proved easy targets. The German barrage killed three men and injured three others.

His unit in tatters, Baker called for artillery support. But the crew didn't fire: they didn't believe the Buffaloes could make it so close to the castle.

By the time American shells hit, Baker’s unit had shattered.

During the continued German counterattack, Baker found his white commanding officer, Capt. John F. Runyon cowering in a demolished house. Runyon told Baker he was going to get reinforcements and ordered Baker to cover his retreat.

Knowing he wouldn’t see Runyon gain, Baker replied, “We’ll be here when you get back.”

“It made me all the more determined to accomplish our mission,” Baker told PBS. “Because at that time the army was segregated, it was thought that we weren't able to fight. That we were cowards. Because we were black.”

But the Nazis weren’t fighting fair. Disguised as Red Cross medics, they ambushed Baker’s unit, which by then had dwindled to eight men.

Baker had a decision to make: If he stayed, more men would die. If he left, the battle would be lost.

“Down to a few clips per man and with no hope of reinforcements, Baker reluctantly ordered a withdrawal,” Kingseed wrote. “My men wanted to stay, but I wanted to ensure some of them stayed alive.”

Covering the withdrawal and assisting the men who couldn’t walk, Baker blew up two machine-gun nests with grenades on his way out. What happened next could only be described as a miracle.

“It made me all the more determined to accomplish our mission. Because at that time the army was segregated, it was thought that we weren't able to fight. That we were cowards. Because we were black.” - Vernon Joseph Baker, PBS interview

During the retreat, a German soldier hurled a grenade at Baker. It should’ve blown him to bits. But of all the grenades thrown, this one didn’t explode. Seizing the opportunity, Baker shot the German twice as he tried to flee.

With his men nearing safety, Baker crept down the mountain draw. Alone, he went to finish what he started.

“There he blasted open the concealed entrance of another dugout with a hand grenade, shot one German soldier who emerged after the explosion, tossed another grenade into the dugout and entered firing his sub-machine gun killing two more Germans,” the citation says.

In all, Baker took out nine enemy soldiers, three machine-gun positions, an observation post, and a dugout.

The battle lasted 12 hours. When it was through, only six of Baker’s 25 men survived.

Demoralized and exhausted, Baker headed back to camp. While R & R should’ve been in order, leadership insisted Baker had more fighting to do.

“When I went back to regimental headquarters to turn in the dog tags of the 19 men that I'd left up on that hill there I was chewed out by the regimental commander Colonel Sherman himself because I wasn't wearing a steel helmet,” Baker told PBS.

Instead of encouragement, Sherman ordered an officer to give Baker a proper helmet.

Sherman barked, “Now that you’re in uniform, lieutenant, I’ve got other news for you,” Kingseed wrote. “The 473rd Infantry Regiment is taking over the advance to the castle tomorrow. They need somebody who knows the terrain. You’re volunteering to lead them.”

The following night, Baker led another assault through enemy minefields and heavy fire. This time, the Americans took the impenetrable castle.

While Baker’s actions were heroic, it wouldn’t have mattered if he liberated all of Italy: Black soldiers weren’t eligible for the Medal of Honor.

Of the 433 Medals of Honor the military awarded during World War II, not one went to the 1.2 million Blacks who served, the New York Times reported.

Instead, Baker was awarded a Purple Heart, Bronze Star, and at the urging of Runyon, the Distinguished Service Cross. It would take more than 50 years to get Baker the medal he and the Buffaloes earned on the bloody mountain.

After the war, Baker returned to a segregated America. He continued serving in the Army, later commanding an all-white company. He retired in 1968.

But his life of service wasn’t done. He went on to work for the Red Cross, counseling disadvantaged families. He served there for more than 20 years.

In 1996, he received a call. The man told Baker that the role of Black service members during the war was being reexamined. Baker and six other Black men were to receive the nation’s highest military honor.

The news was bittersweet: at 77, Baker was the only Black service member still alive.

At the ceremony in 1997, then-President Clinton acknowledged recognition was well-past due.

“No African American who deserved the Medal of Honor for his service in World War II received it,” the president said. “Now and forever, the truth will be known about these African Americans who gave so much that the rest of us might be free.”

As the president draped the medal around Baker’s neck, a tear rolled down his cheek. His thoughts were of the Buffaloes.

“Every once in a while, I wake up in the middle of the night thinking about the guys,” Baker told reporters. “I think of 19 souls that gave their all. If not for them I probably wouldn’t be here myself.”

Baker died in Idaho in 2010, at the age of 90. He is buried in Arlington National Cemetery.