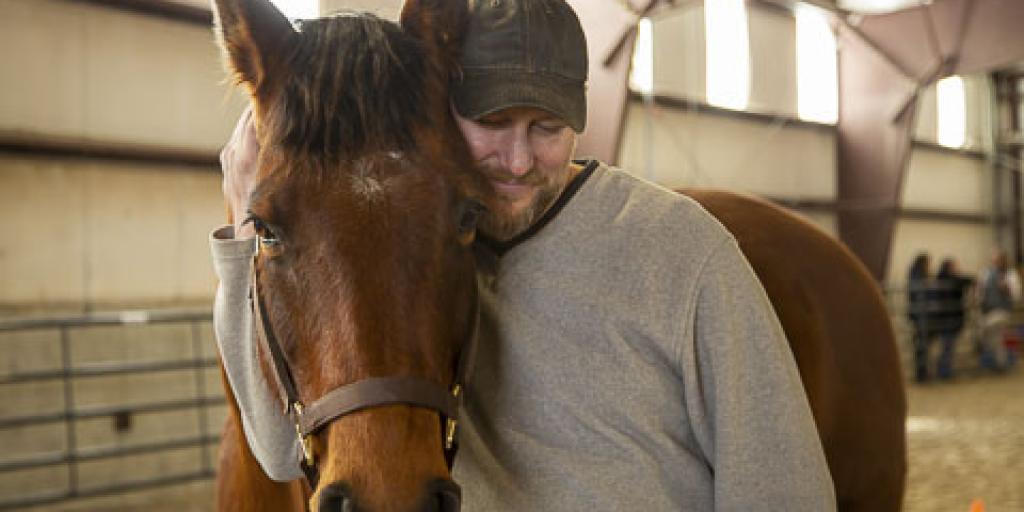 Six legs trod across a sandy arena. Hooves and feet sink in the dirt as horse and Veteran move as one. It’s called a “Trust Walk,” but where the Veterans are going isn’t as important as why they’re there.

They’ve traveled – some for hours – to Utah State University’s Extension Farm in Wellsville, to heal. They’ve come for the horses; or more so, because the horses give them what people couldn’t: Serenity. Security. Love.

“Sometimes, human relationships are complicated, and that can be very discouraging for a Veteran who is struggling with emotional issues,” said Judy Smith, director of Equine and Human science at USU. “Through the relationship with the horse, which is not as threatening, it gives Veterans a chance to explore relational skills in a very relaxed environment.”

The group of six is the first class of VA Salt Lake City Health Care System Veterans to finish the university’s Pathway to Horsemanship class. After an initial meet and greet, Veteran and horse are paired for six weeks, each week working toward strengthening their bond, Smith said.

Among them was Barton Jeffs, a retired Army National Guard warrant officer with 30 years of service. Jeffs deployed to the Persian Gulf in 1991, Bosnia 2001, and for Operation Iraqi Freedom in 2003-04. The nature of his job left Jeffs with PTSD and a difficulty trusting people.

His horse, Rebel, has helped with that.

Smith began the program at the urging of her son, who was injured while deployed. When he returned home, he wanted to reconnect with his horse and told her, “Veterans need horses too.”

She made Veteran equine therapy her mission. With USU wanting a Veteran-focused program and a Department of Veterans Affairs Adaptive Sports Grant, she found a perfect outlet.

While studies have shown that horses can reduce anxiety, depression, and help with mood, Smith’s working on gathering more evidence.

But Veterans, like former Army Intelligence specialist Ellen Casteel, 67, don’t need proof. They can feel it.

There’s no judging. No delving into the past. Just horses, comradery, and peace.

“Her and I just clicked,” Casteel said of her cremello Paint Horse, Missy. “As soon as I walked up to her, she was just nudging me, putting her head down and kind of butting me and we just really clicked.”

The program works because it gives Veterans a new, enjoyable activity in a safe environment that allows them to bond with other Veterans, said Dr. William Marchand, clinic director and service chief for Whole Heath at VASLCHCS.

“We saw Veterans become more animated. They were having fun with each other, which has been a change,” Marchand said. “Also, we’ve just seen people become a lot more confident and experience joy being with the horses”

For Jeffs, the walls he built to keep people out didn’t work with Rebel.

“I have to be real. I need to let my emotions show. Whereas with traditional therapy, I don’t need to do that,” Jeffs said. “It allowed me to become more of who I really am versus who I want people to perceive me to be.”

By the third week, Jeffs and Rebel had made a connection. By the sixth, the two were working as a team.

Through Rebel, Jeffs said he has made progress otherwise impossible with traditional therapy. Jeffs who was estranged from his siblings said that the therapy has helped him reconnect with people.

“I haven’t allowed myself to be part of the word,” Jeffs said. “It allowed me to open up and be more vulnerable with people in a way that I have not been in 30 years.”

Casteel, too, has grown.

“It’s given me a lot more confidence in myself, being able to learn new skills,” Casteel said. “Being around horses anytime makes me happy, and when you’re happy, that affects the rest of your life.”

With a little apprehension and a whole lot of smiling, the moment the Jeffs and Casteel spent the last six weeks training for arrives. They mount their horses, take a breath, and guided by a mentor, take a short jaunt across the area.

Though the experience lasts only moments, it’s not about the ride. It’s about connecting.

“It’s another step that can help me become a better me,” Jeffs said.