Ghost on the mountain 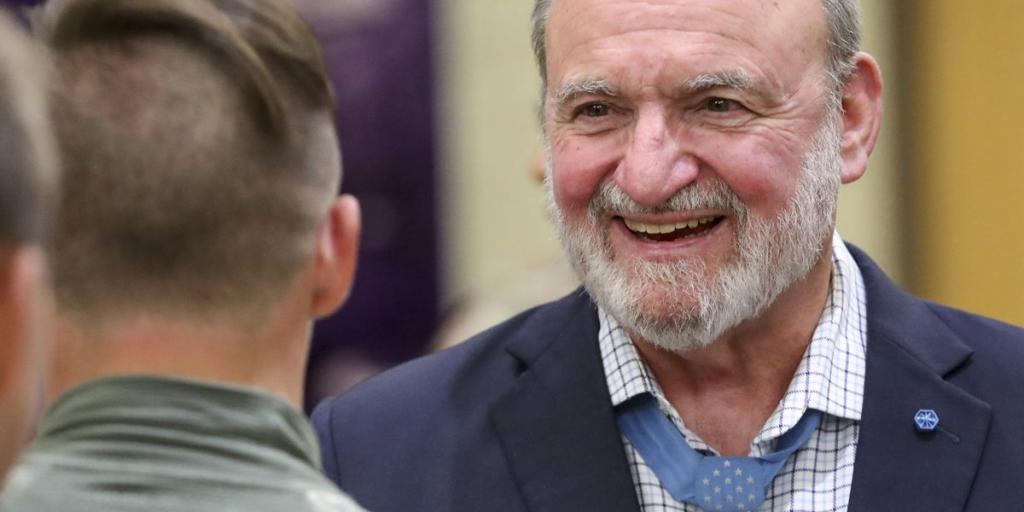 Thirteen stars speckle a blue ribbon resting below his gray, neatly trimmed beard. Beneath them, an eagle’s talons clutch a gold bar engraved with “VALOR” from which hangs a five-pointed star.

Beneath them, an eagle’s talons clutch a gold bar engraved with “VALOR” from which hangs a five-pointed star. Minerva, the Roman goddess of wisdom occupies the center of the star; her likeness encircled by “The United States of America.”

The medal is large, intricate, and befitting of the nation’s highest military honor. But for Brian Miles Thacker, Utah’s only living Medal of Honor recipient – and one of only seven Utahns to have earned the distinction – the medal is heavy. For Thacker, 74, the medal carries the weight of lives changed by war and the ghosts of men who didn’t come home.

After graduating from Weber State in 1969 and following in the footsteps of his father who also served, Thacker joined the Army’s 92nd Field Artillery Regiment.

Soon the young lieutenant was offered the chance of a lifetime: Thacker would lead a small observation team at Firebase 6, a mountainous South Vietnamese artillery site known as Rocket Ridge.

“Being put in command of the observation team was every lieutenant’s dream come true,” he said. “You talk about a dream assignment.”

He had no way of knowing that his dream assignment would soon become a nightmare.

Thacker’s team had spotted an enemy machine-gun nest planted close to their position. Too close.

The enemy was preparing to attack.

But there was nothing the soldiers could do. They couldn’t fire unless the enemy fired first, Thacker said.

“Everyone starts to get excited but there was no ability to react,” he said. “All you could do is get ready.”

Word from intel was that the North Vietnamese would attack at dawn – and that they would come hard.

The plan was for the South Vietnamese to hold the outer perimeter, while Thacker’s men would secure the inner – and last – line of defense. If the line was broken, the enemy would gain access to a deadly arsenal of artillery.

Their defenses prepared, all the men could do was wait ­­­­– and – pray.

The first wave rushed the firebase early, jolting Thacker from his sleep.

The bullets flew and soon, the South Vietnamese line collapsed.

Emboldened by the crumbling defenses, the North Vietnamese closed in. Everything rested on Thacker’s men holding the line.

The young lieutenant and his men were well-prepared. As the enemy pressed forward, Thacker’s men made them pay in blood for every inch of ground. The Americans repelled the enemy for so long that the North Vietnamese ran out of ammo.

But the American victory came at a price: in holding the line, three of Thacker’s men were killed.

It became clear that the battle would never be over; not until the North Vietnamese retook the base.

Thacker knew it. Everyone did.

Two American helicopters attempting to resupply the base were shot down and the crew joined up with Thacker’s men. Then, strangely, the fighting stopped.

“There was a lull from their side and all of sudden it went quiet,” he said. “Air crews told us they (the enemy) were amassing for an attack.”

Cobra helicopters fired on the ever-growing army, but the North Vietnamese were relentless: for every man that fell another took his place. And another.

“They could see the troops, they just couldn’t stop them,” Thacker said. “If there was ever a time to leave it was now.”

The base was lost.

Ghost on the mountain

The base was too hot to risk landing rescue copters. If Thacker’s men and the South Vietnamese were to leave, they would have to make a break for the extraction point; a 1.5-mile trek through enemy-infested territory.

Thacker volunteered to stay behind to buy the others time while a South Vietnamese machine gunner covered him. Thacker would dupe the enemy into thinking the base was still occupied; then, when the enemy closed in, call artillery fire on his position and escape the barrage.

Life and death boiled down to seconds.

If Thacker left too soon, the enemy would overtake the base and capture the retreating forces; too long and he would be killed by the enemy or the artillery fire.

With the enemy closing in, Thacker ordered the machine gunner to evacuate, leaving himself without cover. Then he radioed for U.S. artillery to fire on his position.

“You’re hoping they don’t realize you abandoned the position for four to five minutes, just enough time to get some separation from the artillery fire between us,” he said.

But the shells dropped quicker than expected, endangering Thacker. He didn’t recall if that was the first time he was injured; all he remembered was, something wasn’t right.

“Somewhere on that trail, a little hair on the back of my head said, ‘It’s time to leave the trail.’ and that’s what I did,” Thacker said. “I understood that I wouldn’t be extracted.”

In the darkness, Thacker stumbled upon a bamboo thicket he thought offered cover.

“When the sun came up the next day, I realized that I was not in a good hiding position,” Thacker said. “I was actually quite visible.”

Exposed, Thacker moved downhill and waited to see if the base would be retaken.

The enemy was close – so close he could smell them. For eight days Thacker laid nearly motionless with no food, no water and no way of knowing if the enemy would uncover his position.

He became a ghost on the mountain; listening and learning the enemy’s rhythms.

On the morning of the eighth day, exhausted and dehydrated, Thacker made a break for it. Painstakingly slow, he low-crawled five meters at a time from tree to bush. It wasn’t just enemy Thacker needed to avoid. American aircraft owned the sky, and if they saw movement, they would shoot to kill.

You can never leave

As Thacker had hoped, the Americans had retaken the firebase.

As he approached, throwing his hands up in surrender, Thacker prayed he wouldn’t be shot. Seeing he was dangerously ill, soldiers radioed for Thacker’s evacuation.

But the North Vietnamese were listening. Immediately, they launched a mortar attack.

The next morning, U.S. pilots faked out the enemy, diverting fire until the North Vietnamese ran out of ammo. As medics rushed to evacuate Thacker, a mortar exploded nearby, tearing into his shoulder.

It was his last wound from the war ­– and the only one he remembers.

The scars of war

Thacker was stabilized at Pleiku Air Base, making two more stops before landing in Japan. His recovery took months.

“Some parts never recovered,” he said. “I never got the stamina back that I had before.”

Back in Utah, Thacker was at graduate school when he was told that President Nixon was to award him the Medal of Honor.

“The extraordinary courage and selflessness displayed by 1st Lt. Thacker were an inspiration to his comrades and are in the highest traditions of the military service,” the last sentence of the citation reads.

It wasn’t the end of his service to his country. After college, Thacker worked for the U.S. Department of Veterans Affairs for 26 years, retiring as chief of management support services in D.C.

Like so many Veterans, Thacker doesn’t think himself a hero. His belief is the medal also belongs to his brothers in arms, like those at Firebase 6, who laid down their lives in the name of freedom,