USS Arizona survivor recalls the “date which will live in infamy” 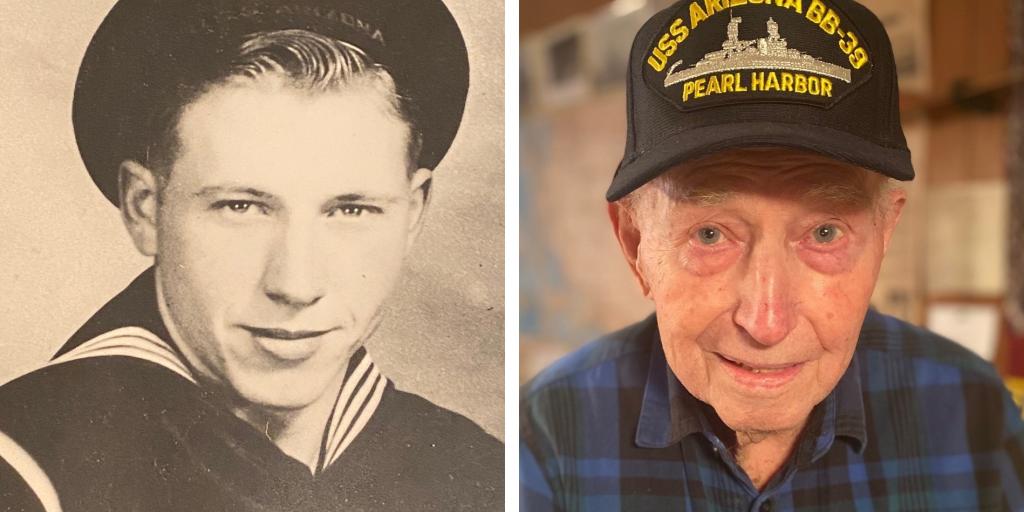 Ken Potts, serving in the Navy in 1941 (left) and 80 years later (right) is one of two living survivors of the USS Arizona.
By Jill Atwood, Director of Communications, VA Salt Lake City Health Care System
December 2, 2021

Eighty years later he can still hear the sirens wailing from Battleship Row. The sounds are what he remembers most from that day. That, and the fires.

USS Arizona survivor, Ken Potts doesn’t like to look back. His recollection of his actions at Pearl Harbor are clouded by the chaos and trauma of that day.

“All you could see was fire. It looked like the whole world was on fire," Potts said.

The 100-year-old still tears up when he talks about the best friend that he lost and how he survived when 1,177 other sailors of the USS Arizona did not.

Potts, who served as a crane operator aboard the battleship, was on liberty in Honolulu on Dec. 6, 1941. He awoke to sirens and loudspeakers blaring, “All Navy personnel get back to their ships.”

He hailed a cab and got as close as he could before a small boat took him the rest of the way. When Potts arrived, The Arizona had been strafed, but was still intact. His memory fails from here as he recalls the carnage; the turmoil and each man doing what he had to do to stay alive and save others.

“The noise you can’t imagine, the noise.”

The bombs that ensued would eventually detonate the ammunition in the ship, causing a cataclysmic explosion. Potts was on the stern when it happened, about as far away from the impact as he could be.

“Abandon Ship!” Potts recalls. “Some jumped in the water and swam, others got off how they could. I jumped in the same boat that brought me out there. It was a mess.”

That boat headed for Ford Island just a few hundred yards away. They picked up as many sailors in the water as they could along the way.  Some were badly hurt, many were covered in oil, others were fine - physically. Once on the island Potts and other sailors checked in at the receiving station. News had traveled fast to the mainland and Potts’s mother had already been told he was MIA and presumed dead.

The next 24 hours were a blur as he returned to the Arizona that same day to help search for survivors. He spent the night on what was left of the doomed ship.

“We were looking for guns and ammo. No one slept that night.”

After the attack Potts drew the grim task of recovering bodies from the Arizona. He grows quiet after he talks about the most awful job anyone could ever have.

Today, he leads a quiet life and likes it that way. His garage has been transformed into a memorial of sorts from that fateful day. And while he doesn’t like to talk about it much, it is clear he will never forget the more than 900 men entombed in the sunken battleship. He says there were like family.

The Arizona’s death toll was nearly half of all Americans killed that day.

Editor’s Note: Ken Potts is one of two living survivors of the USS Arizona. He lives in Provo, Utah with his wife, Doris. He still receives fan mail and special invitations from all over the country. He attended the 75th anniversary commemoration at the Pearl Harbor Memorial in 2016. Potts will be 101 on April 15.