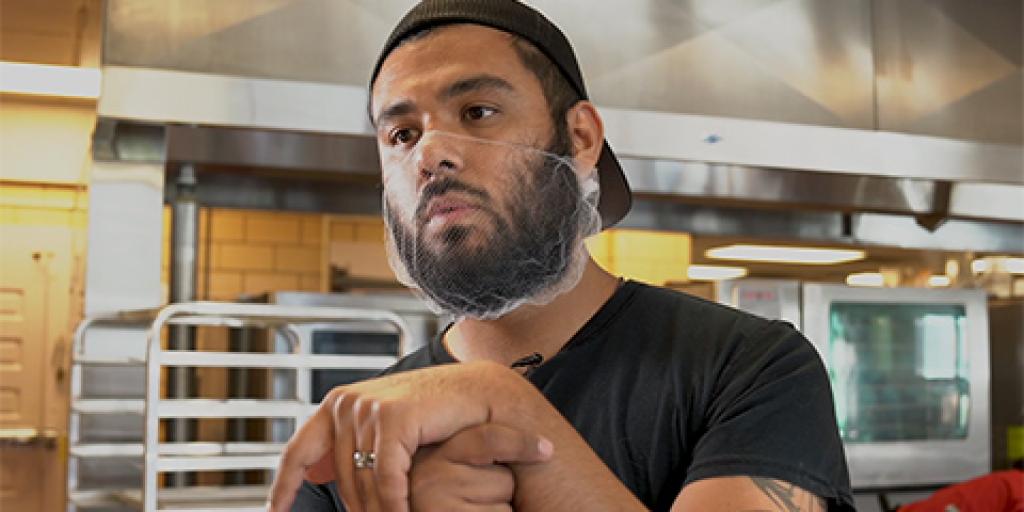 US Army Veteran, Arthur Saenz, dreams of becoming a chef and he isn't letting his disability stop him. With the help of an army of VA professionals, he is on the path to achieve his dreams.
By Jeremy M. Laird, Salt Lake City VA public affairs
November 20, 2019

Standing in front of a long stainless-steel table at the inpatient kitchen at the George E. Wahlen VA Medical Center, U.S. Army Veteran Arthur Saenz readies for the lunch rush.

Standing in front of a long stainless-steel table at the inpatient kitchen at the George E. Wahlen VA Medical Center, U.S. Army Veteran Arthur Saenz readies for the lunch rush.

Large bowls of salad and cherry tomatoes flank his left—while 40 smaller bowls– headed to trays for Veteran lunches – stand amassed on the baking sheet in front of him. Quickly and confidently, Saenz grabs mounds of salad with his left hand; his right silently hunting for the next bowl in the row.

From bowl to bowl, row to row, Saenz fills each bowl with salad, then repeats the procedure, sprinkling on the cherry tomatoes. Snatching the tray with his left hand, his right feels for a cart off to his right. He snags the cart and slides the tray into a narrow open slot.

You wouldn’t know from watching him work, but the 25-year-old Veteran is blind.

“It basically took an army to get me to where I'm at now,” Saenz said while wrapping up his lunchtime run.

A chance meeting in a Wal-Mart parking lot would change that.

"We ran into a someone from DAV (Disabled American Veterans). And they were like, ‘It can’t hurt. Let’s put in a claim for you and let’s get it figured out.’”

With the help of DAV and the local VA, Saenz received his service-connected disability – and more importantly access to an army of VA professionals who would help him learn to live without sight. The VA lined up a three-month intensive living and mobility course for Saenz at the Hines VA Medical Center in Chicago. Leaving his wife behind in Iowa, Saenz was off to a different kind of basic training.

At Hines, Marine Corps Veteran Nathan LaForte, began the long and arduous process of teaching Saenz to live a complete life without vision.

“He put me through the wringer,” Saenz said. “He challenged me. We would walk miles and he would test my hearing. He would teach me how to use my hearing properly so I could listen for on-coming traffic and I learned how to get around specific obstacles with my blind cane.”

LaForte also taught Saenz living skills, like how to safely use a knife, cook a meal, read braille, use adaptive technology to help him navigate the world. He also introduced Saenz to recreation therapy.

“Nathan taught me how to hike,” he said. “He would take time out of his day and take me out to hike.”

Hiking is something that Saenz still loves, and he regularly hikes along the Wasatch Front. While Saenz will take a sighted person with him the first time he is on a trail, once he has navigated a trail once or twice, he hikes alone.

Following his three-month training at Hines, Saenz and his wife decided to move to Utah to be close to her family. His love of the outdoors attracted him to the recreation therapy program at VA Salt Lake City.

“His skills were really good when he came to us,” Wolf said. “He just needed to get familiar with his new neighborhood.”

Under Wolf and Lindsay’s tutelage, both of whom have visual impairments, Saenz thrived-- learning the nuances of his new neighborhood, learning to navigate the campus of the George E. Wahlen VA Medical Center, and how to take mass transit from his home in American Fork to VA Salt Lake City.

Still, something was missing for Saenz.

“He wanted to seek employment,” Lindsay said, “and working with other departments here at the VA they were able to help him.”

My job “is really helping people with disabilities get employment,” she said. “There is a job out there for everyone. If you want to work and you are dedicated and motivated, we can make it happen.”

“He was very excited,” recalled Hanson. “He was like, ‘I have a real job.’ He feels like he’s really working on fulfilling his goals.”

His supervisor, Jennifer Meunier, allowed Saenz to thrive in food service and witnessed a transformation.

“He learned to adapt and adjust to the environment around him in the kitchen,” Meunier said. “I was able to put him in different areas of the kitchen, where he could use his skills and push him in directions, he didn’t know he could go.”

Saenz has plenty of places he wants to go. His goal is to attend culinary school and eventually open his own restaurant. He recently completed the CWT program and was hired by VA Salt Lake City food services.

“He definitely showed other employees that he could pull his own weight and make a difference in the food service team,” Meunier said. “I’m very proud of him.”

Those thoughts are echoed by all the staff at VA Salt Lake City who have helped him.

Saenz is eager to give credit to all those who helped him get to where he is today and has a message for visually-impaired people who may be struggling to find their place in the world.

“Please don't give up because you know there is hope… get help, find someone that's willing to take the time and help you get through these obstacles.”

Watch the video: VA guides Army Veteran out of darkness