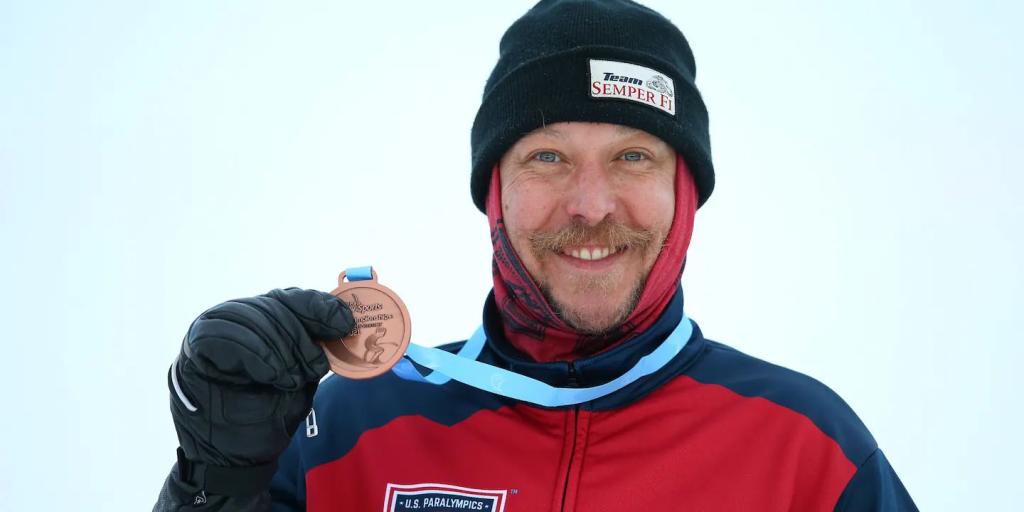 Burdick is competing in both snowboard cross on March 7 and snowboard bank slalom on March 12 at the Beijing Paralympics.
By Jill Atwood, Director of Communications, VA Salt Lake City Health Care System
March 3, 2022

VA prosthetist Dave Draper cast and custom fit Tyler Burdick’s snowboard feet. It’s one of many different “feet” the Navy Veteran has depending on his sporting mood.

“He is totally amazing. He does all of this on his everyday legs with custom sockets but then he attaches his special snowboard feet. He also has mountain biking feet, hiking feet and rock climbing feet,” Draper said.

Burdick is an Afghanistan Veteran, and was a week away from finishing his third tour when a roadside bomb struck his vehicle.

The 40-year-old Salt Lake City native is now a bi-lateral amputee below the knee and has been working with our VA team of polytrauma specialists since 2014.

Sheena Bufton, a program specialist for the Polytrauma Amputation Network at VA Salt Lake City, was surprised with a celebratory call from Burdick.

“Tyler called me and said, 'Sheena, guess what? I made the team!' And I responded, 'Oh my gosh Tyler, that is so awesome!'”

Burdick's snowboard passion started as a teenager. After his injury he participated in the Warrior Games and was introduced to the National Ability Center in Park City. From there he began training with team Utah.

“He has always been competing on a high level, but this has definitely been a break out season for him. It’s been a huge positive boost," Draper said.

This is not Burdick's first Olympic run. He competed at the Sochi games in Russia, where he finished eighth, and just missed the cut for the PyeongChang games in South Korea – but captured bronze in the World Cup that very same year.

Dr. Bradeigh Godfrey could hardly contain herself when she got the news about Burdick.

“Our amputee rehabilitation team has known him for years and this is such an amazing accomplishment for him, for so many reasons. I’m just grinning from ear to ear. And also crying a little," she said.

Burdick is also the only member of the snowboarding team with a military background. Go Tyler! We will be watching.

Read more from TeamUSA - After Eight Years Tyler Burdick Is Relieved To Be Back At The Paralympics.