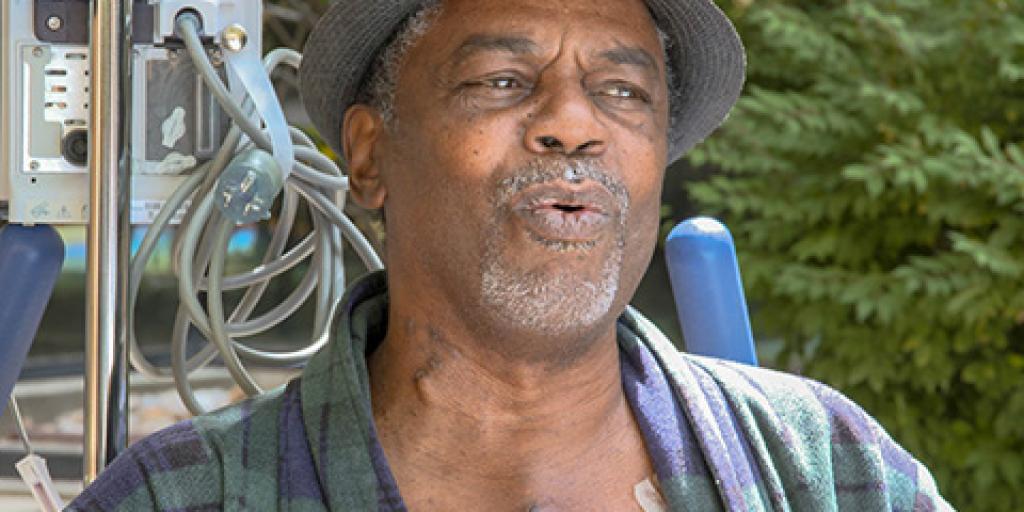 For the last six months, Karl Baylor had been waiting to find out whether he’d live or die. His heart was failing. It was only a matter of time.

Since February, Baylor, 62, has been staying at the George E. Wahlen VA Medical Center – one of five VA medical centers that provides heart transplants to Veterans.

But ill health did little to slow Baylor down or dampen his enthusiasm for life. Those that have grown to know Baylor said his real heart – personified in his buoyant Texan personality – was perfect the way it was.

“Karl’s a character. He’s a total character,” Baylor’s VA nurse Carolyn Redd said. “Karl’s full of life – so much so that we had to go chase him.”

Armed with a contagious personality and room-filling baritone, Baylor passed much of his time at the VA by singing to anyone who listened. His showmanship lifted spirits, transforming the Vietnam-era Army combat engineer into a local celebrity.

Not bad for man who should’ve been dead.

Baylor had been struggling with low blood pressure for some time when in 2014, doctors broke the news that he would need a new heart.

He brushed off the news.

Baylor arrived at the George E. Wahlen VA Medical Center in Salt Lake from Mansfield, TX, in July of 2018. He was hooked up to a machine that would keep his blood flowing until a suitable heart was found – the first time he said the VA saved his life.

“If I would not have gotten this LVAD put in, I would’ve been dead by November of that year,” Baylor said. “I was barely pumping.”

He moved into the hospital permanently on Feb 10. And as he waited for his new heart, Baylor began to sing, captivating those around him.

While it was a small gesture, staffers said Baylor’s voice lightened the steps around campus. His shows, twice a day just outside the hospital entrance, became something Veterans and staff looked forward to.

“It impacts me,” Redd said. “When I park in the morning and the sun’s coming up and I come around the corner and he’s singing, it feels good.”
Baylor’s VA nurse Micaela Brandelmayr called his songs, “the most beautiful gift.”

“You may have gone through something through the week or the day or you just may not even feel like coming to work today,” Baylor said. “But that song has a way of touching you in some kind of way, and to me, that’s why I do it.”

The music may have done as much good for Baylor as it did for his fellow Veterans.

“It is the most gratifying feeling to see smiles and uplifted spirits in just that moment,” Baylor said. “Every day that I can come out and sing, I’m happy.”

So, he kept singing.

As he awaited a new heart, staffers grew closer to the man behind the voice.

“When people are here as long as he’s been here, you get invested,” Redd said. “You see them at their best and their worst and you want them to do well.”

For Baylor, staffers became his second family; people who rejoiced in his triumphs and were saddened by his struggles.

He was particularly fond of Brandelmayr, “momma bear” who he said reminded him of his mother.

“You touched me girl,” Baylor, his normally composed voice breaking, told her. “Ain’t too many people that can get down in there.”

Word that a heart was available came down in July.

He got his heart – and a second chance at life – Aug. 2 at the University of Utah Medical Center.

Shortly after surgery, still tied to an army of tubes and machines that kept him alive; his body arrested with unspeakable pain, Baylor remained ever-positive.

“I haven’t felt my heart in seven years,” Baylor said. “What I’m feeling now, it’s like, somebody is in here.”

Baylor said he plans to stay in Salt Lake City for a while. He promised to visit his new VA family – and bring his voice with him.

He was thankful to have a new lease on life and grateful for the VA for all it had done.

“I did not expect when I raised my hand in 1974 … that the VA would take care of me now that I’m in my 60s in a way that I would never have expected, so I am proud to be a part of this,” Baylor said. “I can keep living, I can take my grandchildren fishing, and doing things, singing, doing all the things I’ve been wanting to do, but do it with strength.”