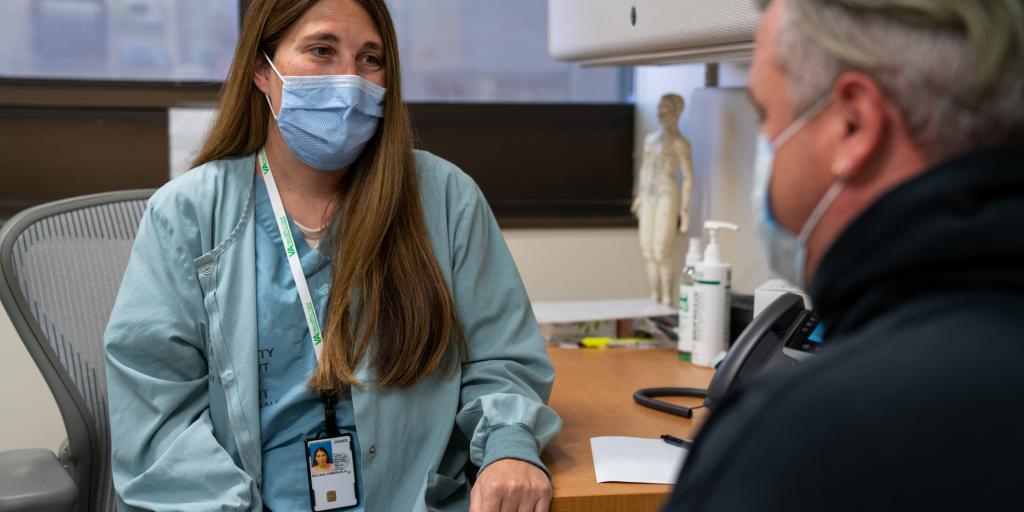 Air Force Veteran AJ Ethridge Jr talks with VA director of transitional pain service Dr. Kimberlee Bayless about the drastic improvement in his life since conquering a decade-long addiction to opioids. Ethridge, who participated in the first program of its kind at VA, said there’s hope for anyone living with pain.
By T.S. Jarmusz, Salt Lake City public affairs
November 12, 2020

Four years ago, Air Force Veteran AJ Ethridge Jr. faced a grim choice: spend the rest of his life in pain – or die from opioids.

A decade under the rule of painkillers left his outlook bleak.

"I didn't have any hope for the future," Ethridge said. "I thought my pain was going to get worse until the day I died from it."

But a new way to manage pain developed by the Salt Lake City VA Medical Center ­– and the first of its kind at VA’s nationwide – gave Ethridge another choice: reclaim his life.

Amid the height of the opioid epidemic, VA’s pain management team began using a whole health approach to focus on what mattered most to its patients. The method revolutionized not only how pain was managed, but also prevented opioid addiction.

“We were interested in seeing if we could improve outcomes by engaging with Veterans before surgery, rather than waiting until after surgery,” said director of transitional pain service Dr. Kimberlee Bayless. “We were also interested in addressing the problem of Veterans who developed chronic opioid use after first using opioids for their surgery.”

Previously, about 6 percent of Salt Lake City Veterans used opioids after surgery, a figure too high for Bayless. Since the switch about two years ago, the rate has plummeted to zero – trouncing the national average of 5 to 14 percent.

The research was named editor’s choice in the November issue of Regional Anesthesia & Pain Medicine journal. It has led to “real, permanent improvements” because it focuses on patient interaction and education, the coordination of care, and educating providers, Bayless said.

“No one has ever spent as much time working with a Veteran around surgery as we do,” she said. “We provide education, realistic expectation setting, pain coping tools, and close care coordination before surgery so they know exactly what we’re going to do to help them manage their pain after surgery.”

For Ethridge, the move meant the difference between the pain of living or living with pain.

The throes of addiction

Wanting to serve his country, Ethridge joined the Air Force after 9/11. He worked as a mechanic during the war in Iraq and was medically discharged after suffering a traumatic brain injury.

But that would not be the worst of his problems.

A back injury introduced Ethridge to opioids. The pills numbed the pain – too well.

Immediately, he was hooked.

"I started needing more, and more," he said. "Nothing was ever enough. I started injuring myself to go to the emergency room so that I could get an opioid shot."

The medical bills piled up. His home life crumbled. His pain worsened to where he couldn’t walk without a wheelchair.

“I was in an opioid coma,” he said. “I hated everything. I hated everybody. My pain was so horrible you couldn’t imagine it.”

His descent continued until about four years ago when his wife gave him an ultimatum: “Quit or I’m leaving with the kids.”

For two years, he tried to quit, each time failing worse than before. Then, before his fourth back surgery in January, VA’s pain management team gave him another option.

"We started talking about a plan to get me off," he said. "I never thought I could get off of opioids because I just thought my pain would never stop."

The road to recovery

For Ethridge, pills were replaced with counseling, physical therapy, and chiropractic care.

“This is why we all became health care providers and why we choose to work at the VA,” Bayless said. “The real success is at a very personal level that we get to be part of and see how our efforts can make a real difference in a Veteran’s quality of life.”

As Ethridge’s pain lessened and his mind cleared, he discovered his love of family outweighed his fear of pain.

“When the pain gets real bad, you just want to go numb because it’s so bad it kills you,” Ethridge said. “But what I want off opioids is stronger than what I wanted on opioids.”

His many surgeries and the two 5-inch rods in his back will always leave Ethridge with lingering pain. But that’s not a priority anymore.

Recently, Ethridge started working as a social services assistant at VA. He plans to use his experience to help give back to Veterans.

“Until you de-cloud your mind from opioids, you’ll never be able to see all life has to offer,” Ethridge said. “Once you see the brighter side of things, that pain will never feel the same again.”