Transgender Veteran Finds Himself Through Yoga and Community 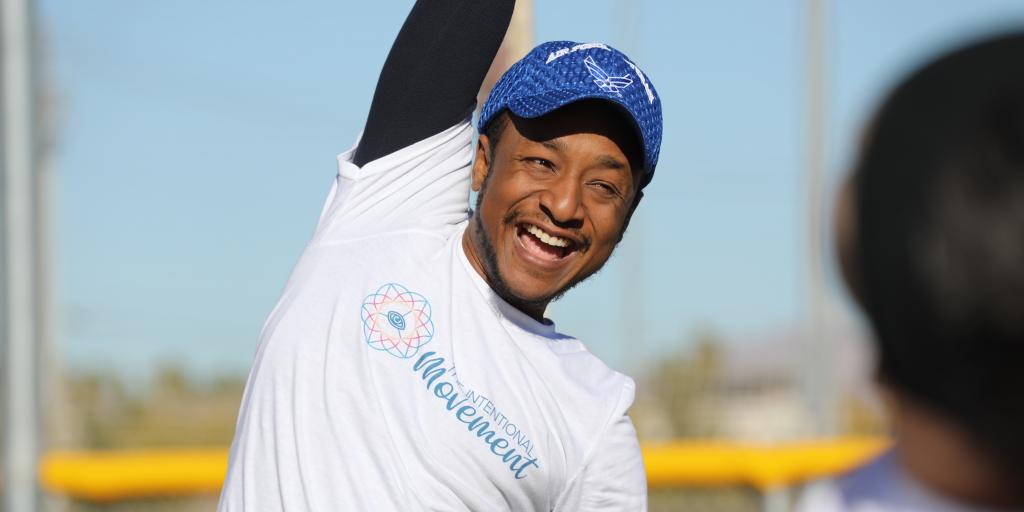 Jay Cambridge has embraced many changes on his life journey. He is a Veteran, a yoga instructor, and he is transgender. Each of those transitions have helped shape him into the person he is today.

Cambridge enlisted in the Air Force in 2008 and spent six years serving as a security forces airman. During that time, he served in Korea and travelled to more than 30 countries.

“The Air Force was an incredible journey for me. I got to see the world, I got meet people from all over the world, and I got to find myself,” he said.

Cambridge’s journey to find himself began at a very different place. “When I joined the military, I joined as female. I was female-assigned at birth and so my entire military experience was as a woman,” he said. “As a black female working in security forces, I was already a minority. It’s a career field that is predominately white and male. I was very quiet and felt like I had to walk on eggshells.”

As someone who describes himself as outgoing and expressive, Cambridge struggled with having to keep part of his life a secret.

“Serving in the military as a female, I identified as a lesbian, and served during the last few years of Don’t Ask Don’t Tell,” he said. “That was a difficult time for me, as I was not allowed to truly be myself. Unfortunately, I did face investigation and reprimand for simply being who I was.”

While serving in the Air Force, Cambridge began to associate himself with a more “masculine energy” and eventually realized that he identified as transgender.

When Don’t Ask, Don’t Tell was repealed in 2011, he knew that it would change his life. “I will never forget that day,” Cambridge said. “I am so grateful that I got to experience that while serving active duty. It was a breath of fresh air and alleviated a lot of stress. However, identifying as transgender, that was another enduring struggle as well. I knew that it was a great start, but we still had a long way to go.”

During the six years that Cambridge served in the Air Force, he faced incredible adversity. “I endured discrimination and military sexual trauma,” he said. “I lived in a lot of fear. It was extremely difficult. I faced depression, anxiety, and suicidal ideations.”

“Unfortunately, many of these conditions afflict the transgender community at a higher rate than the general U.S. population,” said Dr. Micol Levi-Minzi, a VA Southern Nevada Healthcare System psychologist who works with many LGBTQ Veterans. “Statistically, transgender people are nine times more likely to attempt suicide than other Americans.”

With violence, discrimination, and self-injury affecting the transgender community at alarming rates, VA Southern Nevada recognizes the importance of the Transgender Day of Remembrance. This annual observance on Nov. 20 honors the memory of the transgender people whose lives were lost in acts of anti-transgender violence, and those who have lost their lives to suicide.

The Department of Defense announced in March that transgender servicemembers would again be allowed to serve openly, and be provided gender-affirming procedures and care. It’s step in the right direction for acceptance, believes Cambridge. “Reflecting on Transgender Day of Remembrance, it’s important to recognize how far we’ve come, but also the work that we have left to do. The statistics with transgender women being murdered is high. It’s even higher for transgender women of color.”

According to both Dr. Levi-Minzi and Cambridge, one of the most important factors in the well-being of a transgender person is having supportive friends or family. “My group of friends accepted me for who I was, and they were very diverse, from straight to gay to trans and everything in between,” said Cambridge. “We all need a support system. We all need a place or a group of friends that will allow us to be ourselves. That can be the difference between life and death. Sometimes all you need is that one friend or family member who is going to be in your corner who can support you all the way through.”

For Cambridge, his biggest supporter was his father, who passed away in 2020. “He always had my back, and he was my support system,” he said. “If I didn’t have him, I don’t think I would be here today sharing my story. He was always such a strong source of optimism and positivity. I still know that he is here with me, and I still receive his guidance and support.”

In 2014, Cambridge chose to leave the Air Force to continue his journey of self-discovery. He began his physical transition. The initial process was self-funded, along with the help of private support. Since then, however, Cambridge has received most of his care through the VA Southern Nevada Healthcare System.

Throughout his transformation, Cambridge still struggled with depression and anxiety, and looked for something to help him heal mentally, physically, and spiritually.

“When I was in treatment, they presented yoga to me,” he said. “That was the first time that I ever really felt connected to my mind, my body, and my spirit. It became my first healthy addiction.”

Cambridge knew that yoga would play a key role in the next phase of his life. He wanted to share this gift with others who needed guidance. He spent several months in India, living in an ashram and learning the art from renowned yogis.

When he returned, Cambridge founded an organization called The Intentional Movement. “The movement is for individuals who are transitioning and who could be transitioning with gender identity or those transitioning out of the military,” he said.

Through this organization, Cambridge is carrying on his father’s positive outlook by providing support and community to those in need. He’s doing this by using the same therapy and life lessons he learned to help others walk their own path. “For me, this has not always been an easy journey, but I want to tell other transgender people that life does get better,” he said. “I’m in a space now where I live boldly, I live proudly, I live true, and I would like to use that to help inspire others to be their true authentic self.”

Cambridge believes that those lessons he has learned can apply to anyone. “We’re all in a transition, he said. “It doesn’t matter if it’s a transition with your gender, your career, or your life. What can we do to smooth that transition? Be kind to one another. Build a more supportive community. Maybe it’s just saying hello or giving someone a smile…because you don’t know what that person may be going through.”

That sense of community is one of the reasons that Cambridge feels comfortable getting his care at VASNHS. “The VA has come a really long way in caring for transgender Veterans,” he said. “From hormone replacement therapy to prosthetics, the VA has really jumped on board to be inclusive to all Veterans. When I’m at the VA, I can let my guard down. I feel very accepted here, and it’s been a pleasant experience. When I call to make appointments, I get addressed by my proper pronouns and my name, and it really means a lot.”

Levi-Minzi believes that through simple gestures like pronoun recognition and usage, we are respectful of and addressing the needs of every Veteran and employee, regardless of their identity. “Everyone deserves to be treated with dignity and respect. We must all commit to that. We are proud to serve all who served.”

VASNHS has resources available for LGBTQ+ Veterans in prosthetics, mental health, speech therapy, and other services. Additionally, there is a full-time LGBT Care Coordinator at VASNHS to serve LGBTQ+ Veterans and provide support to members of those communities. For more information about the services offered at VASNHS, please visit https://www.patientcare.va.gov/lgbt/