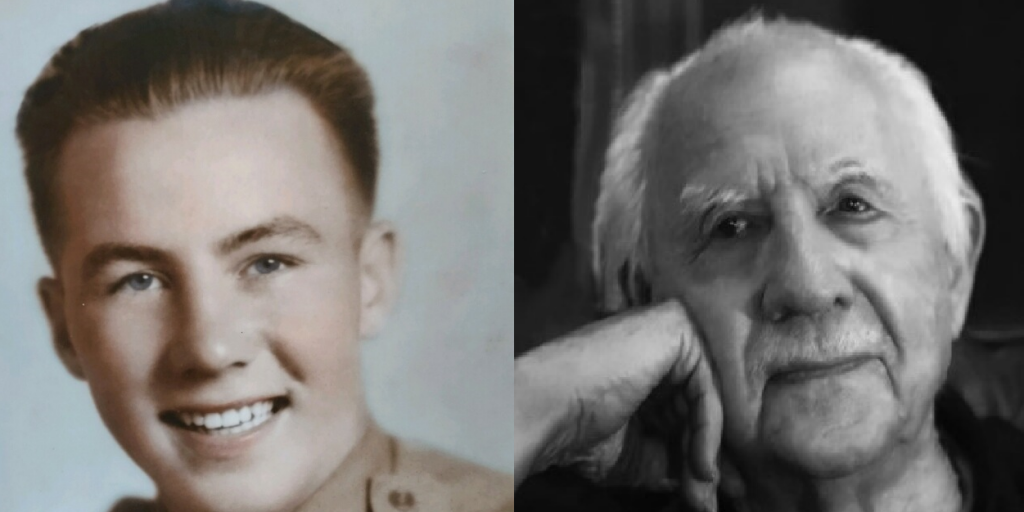 A local World War-II Veteran continues to inspire his family and the dedicated team at Mann-Grandstaff VA Medical Center by crediting VA for his continued health, access to COVID vaccines, and a life-long commitment to service before self. He was an “airman” before the Air Force was even born.

U.S. Army Air Corps Veteran Donald McSparrin is now 97-years young and was recently accompanied to his appointment at VA by his daughter Lisa.  Born in 1924, and like many who grew up through during The Great Depression, Donald followed his own father’s footsteps into the military after WW-I.

Long before acquiring a 120-acre ranch and settling down to raise his family outside Chewelah, WA, McSparrin enlisted in the Army Air Corps and was trained as a weather forecaster.  He helped plan top-secret aircraft bombing missions by the U.S. and its allies into Nazi Germany and throughout Europe.

After the war, Donald McSparrin enrolled in college. He was a brilliant mathematician, which is probably why he bet on himself when he proposed to Roberta, a nurse who he met at a local soda shop while enrolled in college at Chico State University, in northern California.

They were happily married for 72 years. Beyond the military, travel, and raising a family together, McSparrin would attend several higher education institutions, including Harvard University.  Donald would earn degrees in both mechanical and electrical engineering.  He and Roberta were blessed with seven daughters.  All are pictured in a family photo celebrating Don and Roberta’s 50th wedding anniversary, and the deep love and commitment this family continues to share.

Daughter Susan is a retired Registered Nurse who has cared for her Father since Roberta’s passing just two years ago.  “I’m privileged to live and care for Dad, along with the loving help from all my sisters and the wonderful help, care, and services from the Coeur d’Alene Senior Center, American Legion, and VA.”

Daughter Rachel distinctly remembers a special moment while she was a little girl and the family lived in Tri-Cities, Washington. where McSparrin proudly worked at one of the nuclear reactors that decades earlier helped put an end to WW-II with Japan.  The Cold War and nuclear deterrent followed, and in 1963, President John F. Kennedy visited the Hanford Nuclear Complex, honoring Kaiser Engineering, and its employees, including McSparrin.  Rachel still has news clippings and pictures of the day her daddy took her and his wife Roberta to work for the President’s special visit, landing in Marine-1 at the nuclear reservation.

More than 50 years later, daughter Lisa escorted her father to his recent appointment at Spokane’s Mann-Grandstaff VA Medical Center.  Beaming with pride, Lisa couldn’t help but “ham it up” with her Dad, sharing stories of his days as a young boy, stealing watermelons, or getting his tonsils out without any anesthesia.  “My papa is a bad--s” she smiled.  She then explained how he loved billiards and was a regular at the famed “Don’s Pool Hall” in nearby Post Falls, Idaho.

Donald McSparrin served his fellow Veterans as Secretary of his local American Legion Post, as well as volunteering for the rifle-squad and Honor Guard during burial ceremonies.  “This is how we were taught to serve our nation, our communities, and to honor our fellow Veterans,” he smiled.

In addition to his family and the beautiful love story he and Roberta lived and created with their daughters and extended family and friends, Donald McSparrin’s smarts, wit and can-do spirit are an inspiration to all who know him, including his VA health care teams in Spokane and Coeur d’Alene, ID. As a believer, Don also gives his thanks “to God Almighty” through St. Cyril’s Byzantine Catholic Church.   At 97, and when asked what inspires him now, he says, “I have many wonderful memories.” But as he looks to the horizon, he can’t help but think about his favorite and beloved Gonzaga Bulldogs basketball team!  “Maybe, just maybe, this will be the year they win it all?  I’d sure like to see that.” he smiled.