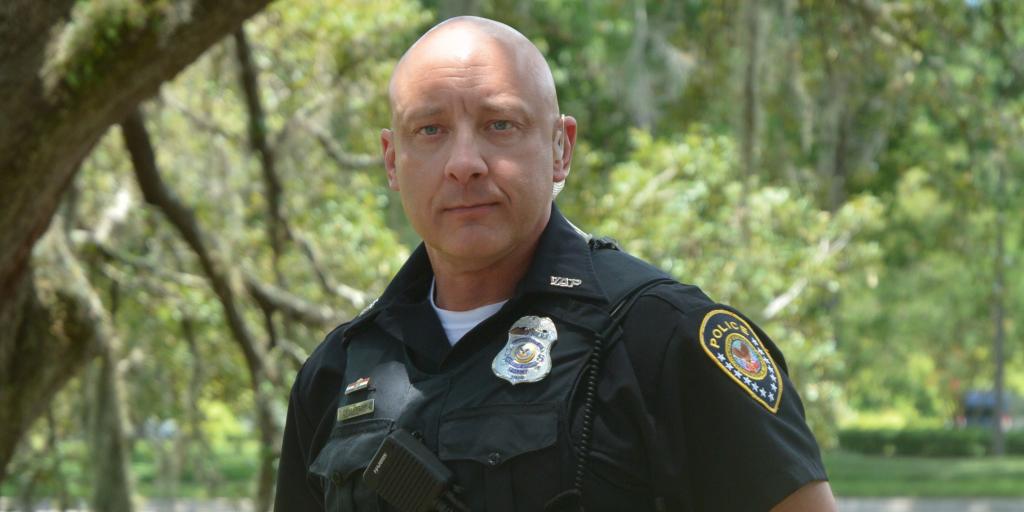 "I figure I bought him about 10 minutes, which it looked like he needed."

It was a usual Friday evening. Tampa VA Police Officer Chris Demarest had just finished his shift at the Primary Care Annex and was headed back to the Main Hospital, moving with slow traffic on Fletcher Ave.

It was usual, until it wasn't. "I was passed on the right by a truck going recklessly, incredibly fast on the shoulder," recounted Demarest.

He watched as the vehicle raced up to a bottleneck and got stuck, the driver frantically merging back into the rush hour standstill -- right next to his police car.

"That's when I noticed the driver had her window down. I could hear her yelling, so I turned to talk to her. She was in a pretty serious state of distress. She said her son was in the back of the pickup truck, and he'd been shot badly."

In that moment, 24 years of police experience kicked in.

"Officer Demarest was acting in a life-and-death situation," says Tampa VA Police Chief Paul Fleming. "We train repetitively so it's muscle memory, in any response to a critical incident."

"I told her to fall in behind me, and I and activated my lights and sirens.” Now with Officer Demarest leading the way, the traffic started to part. "My goal was to help get them to Advent Health, that was the closest facility that could handle that level of trauma. But I didn't know how bad it was until we got there."

True to his career of service, Gulf War Veteran and VA Police Officer Demarest acted as a Good Samaritan, a citizen helping a member of the community in need with the tools in his reach. Pulling in to the hospital, Officer Demarest ran inside to alert the team and rushed out to render any aid he could.

"There was blood everywhere. The patient said he thought his leg was broken and it looked like it. I considered applying the tourniquet, but he had so many bullet holes, I didn't know where to start.”

Luckily, there was a surgeon 50 feet away, Demarest kept the patient talking until the doctor could get there, and then helped get the patient out of the truck and onto the stretcher. He stayed as a calming force to the family while the Advent Health team took over.

To Chief Fleming, Officer Demarest's ability to judge the situation and act is a skill that's key to his force's success. "We are VA police officers working in the healthcare environment. We bridge the gap between police and EMS often, and we respond to all kinds of emergencies. A lot of our training is geared to that aspect, to being a first responder. He knew this could be a dire situation if he didn't react."

The patient made it the hospital, thanks to Officer Demarest's quick thinking. "I figure I bought him about 10 minutes, which it looked like he needed," said Demarest.

"Sometimes you have to go with your gut,” added Chief Fleming. “He knew something was wrong, and he acted. His actions were exactly right."