Veteran’s prose was spark that reignited his passion to live 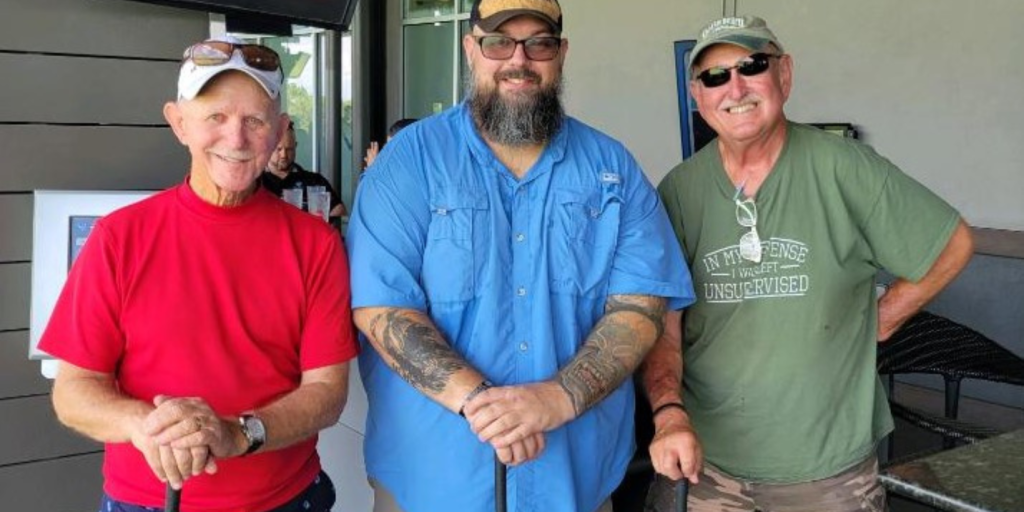 U.S. Army Veteran Matt Brinkley remembers 2009 in Afghanistan and the sound of silence.

“As I sat there alone, thinking about all the friends I had lost, time just stopped,” said Brinkley.

At the time, the young specialist was in the middle of his second deployment in four years, working two grades up as a squad leader, with 3rd Combat Aviation Brigade, 82nd Airborne Division.

He thought about the friends he had lost and felt there was no other choice.

"I was going to pull the trigger,” continued Brinkley, “but then I saw a pen and a sheet of paper on the table next to me.”

In the time it would have taken Brinkley to end his life, he made a choice to live. He picked up the pen and began to write. The ink flowed in-time with Brinkley’s emotions and as a new day began, the paper in front of him had five poems.

Three years ago, Brinkley joined James A. Haley Veterans’ Hospital & Clinics. Today, he serves as a contract specialist at VISN 8. Brinkley offered that he’s also proud to get his health care – including mental health support – as a registered Veteran in the Tampa VA system.

“The care I receive here has far overshadowed any reservations or predispositions I ever had about the VA system,” said Brinkley. “When you’re in that dark abyss, and you can’t get out, there are people at VA who will walk with you, step-by-step, to help you find that light.”

Below are the five poems Brinkley wrote that night in Afghanistan.

Witness to their falling all around me
Their blood upon my face, upon my hands
The screams never ending, forever in my head

I see them lying cold and empty on the ground
Waiting to return, once more the dust of Earth
Just another pile of bones left to rot

Their accusing eyes behold me, they pierce my soul (unrelenting eyes?)
What’s left of it mocks their cries for mercy
There’s nothing I can do, I’m not their savior

I’m just the one who made it out alive

They’ll never hold again the ones they loved
The goodbyes they’ll never have the chance to say
I’m still here, why am I allowed to live

While those who think they’re better men find all the profit
Their pockets are lined with purloined silver, stolen riches
Subverted to their will, a well-timed word to spill the blood of others
We’re taught to hate, driven into blood thirsty frenzy

They have strings attached, the desires of our hearts deep and dark and hidden
Their charade is clear, yet I’m powerless to stop it, I’m only one man
There’s strength in numbers, we can pull them down

They smile to our faces, promising all is for the best
Yet who are they to judge, they’ve lied like all the rest
Manipulated and divided, it is we who’ve been conquered

We have purchased the fairytales that now rule our lives
Planted in our dreams are false and empty hopes, yet we cling to them
Promises that can never come true, lies that make it possible to sleep at night

The new world order already dawns upon us (has already arrived?)
Why do we allow them to drive us further into the ground?
We’ve surrendered and lost all that was won for us in blood and tears

Let now be the time we say no more, the time we take them down
Rise together, we’re a force unstoppable, we’ll contest the prize
Take control once more, our destiny is in our hands, from many, come one

There alone and empty
Tomorrow’s pain is still a mystery (Tomorrow’s pain, an enigma?)
A body broken, a hollowed shell
Doomed to tread this earth, his own private hell
There’s no understanding them
He returns their hate, heart full of vengeance
Shunned and silent, his screams unheard
The empty shadows are dark and cold
He awaits them there, his sanctuary undisturbed
To spend it all uncaring, this eternity unbending
Abandoned on his knees in prayer, he yearns for death’s release
His desires were unrequited, forced to feel the emptiness
Reminded of past wrongs, failed, tortured, unforgiven
That done once right now matters not
All they see is a failure, defined by his mistakes
He is to them a disease, a plague upon humanity
A creature of their hate, he spreads his poison easily among them
Their thought and dreams are as twisted as his pleasure
His face a haunted smile, Harbinger of their doom
Condemned to walk his path, their lives are ruined by his wrath
He rips their souls from mortal coils, their suffering the spoils
Disallowed the joy he’ll never know, a parasite within to grow
Their perfect lives they leave behind, to join him is their fate
In this hell that he’ll create, he spreads his plague, their hate
He twists their minds and hearts asunder, their loss of joy his plunder
Puppets dance his tune before him, that which lights his face is grim
The sky rains blood as the earth tears itself apart from the inside
He waits, and watches it match his suffering in its throes
It will take him with it soon, he’s no longer alone, he knows

I’m haunted by the failed dreams and aspirations of my life
Seems I’m only good at hurting those around me
Smashing their dreams and shattering hearts
Like flesh comes right off the body
Can’t shake this darkness, not sure I want to

Where once was love now dwells this hate
The darkness has triumphed over the light
The world crumbles, I sit and laugh

An embrace of death, and lost forever
I’m falling closer to the point of no return
Going forever deeper into the void
I’ll never know what could have been
Knowing instead the demons that haunt my nightmares
They torment me to my core, an eternity of regret

I’ve failed, they remind me, I’m torn apart with ease
No chance for resistance, I’m crushed within an instant
I’m stripped of hope and of the light bereft
Pain and piercing cold are the only gifts

I may never know again the light, nor feel its warmth
Today there’s darkness over my head that can never be shaken
Still, I fight, the darkness my fuel in this place that I’ve been taken
Nothing will withstand me, my happiness my own

If this darkness be mine, be it so

Angel of My Nightmare (Never)

Acid flows through my veins
Once blood and life pumped through me
Replaced and lost
Corroded by a heart of lies
Never Again
Shall I let someone close enough to cut me
Never Again
The fallen walls surround me
Fueled by acid now, a reminder
Burning away inside me forever
Never again
Trust no-one, I’ll remember
To think with my brain
My heart is for feeling
Never again
Will I let myself be hurt
I let her in, but I’m the fool
A toy to make her days more interesting
Her smile haunts me
Angel of my Nightmare
The plague that rent my soul from limb
She found me
cast from the sky
this demon
Perfection filled my vision
Awaiting pain and suffering
Blinded, I surrendered
Pawn to hell as yet unknown
My funeral shroud
This hate infused my blackened heart
Stronger still than I have ever been
Faster and harder than before
A foundation new, un-penetrated
Pain now the slave not Master
Eternal and un-sated

What have we gained from questioning ourselves?
We’ve made our choices for a reason, even if it’s never known
Who are we to question fate, our path is predetermined?
The destination is the mystery, the journey there the forge

Unhindered, destiny will be our guide
She will take us to our place, so long
As we never back down, accept responsibility
Knowing, no matter what, that our actions are just

Defy the demons that plague us with doubt
Forever trying to change us from our path
Are we so blinded, we’ve allowed their choices to become ours?
We’re all afraid to take that step ourselves (that step alone?)

Nothing can withstand us, yet our choices make us wrong
Allowed the simple things to stain our thoughts
They hold us back, we’re paralyzed
Allowing everyone else to dictate how our lives are lived

When will we learn that this is our life, that we are who live it
We have control, our choices made, and yet to make
Accept what’s ours, confront and face the demons
No longer shall they rule us, Sic Semper Tyrannus. Thus always, to tyrants

We reclaim our humanity, no longer zombies on the path to nowhere
Awaken, carpe diem, and regain our due
Stand tall, be counted, and be without fear (do not let fear rule you?)
We’re the key, the cure we’ve searched so long for