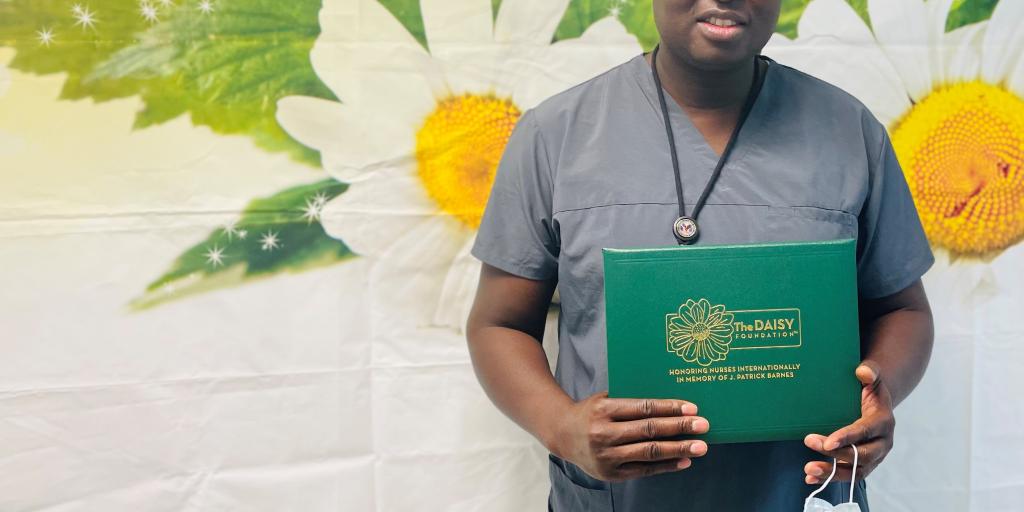 From a young age, Moussa Diouf knew he wanted to help people.

His journey started in 2005 when he began teaching French and math in his home country of Senegal. He later moved to the United States in 2009 for new opportunities.

“I worked at a warehouse for a few years before getting my degree,” Diouf said. “I applied to the nursing program at Tennessee State University and ended up being the No. 1 student in my class after graduating.”

He knew his interactions with patients would be limited in his new role, but Diouf still found time to connect with Veterans admitted to the hospital.

“What an absolute pleasure it was to spend just a couple of hours with [Moussa],” a Nashville Veteran wrote about his experience with Diouf. “He made a rough night pass so easily.”

In June 2022, Diouf was honored with The DAISY Award, an international award given to nurses for providing extraordinary compassionate care to patients. Nurses are nominated by a patient, caregiver, colleague, or anyone who observes the extraordinary care taking place.

“I was admitted for a ruptured colon. Several days into my admission, Moussa was my nurse,” the patient wrote in The DAISY Award nomination. “He was very educated and caring. He advised me on the care I was receiving and took excellent care of a fussy and demanding patient. We developed a rapport, and I learned a lot about Senegal and Moussa's culture.”

Diouf was shocked but said it felt great to receive the recognition from the patient. Diouf felt he was doing a normal part of his job.

“Every time I’d go to the break room or check on other nurses, I’d stop to check on this one patient to explain the care he was receiving,” Diouf said. “He had a lot of questions and I wanted to make sure he knew what was going on.”

The Senegal native described his love and passion for the patients he treats at VA Tennessee Valley Healthcare System. He wanted to be a nurse to save lives and provide excellent care for those who served the country.

In The DAISY Award closing statement, Diouf’s patient wrote: If my mother were ill and hospitalized, I would hope for a Moussa for her.

To nominate an extraordinary nurse for The DAISY Award, visit www.daisynomination.org/TVHS.