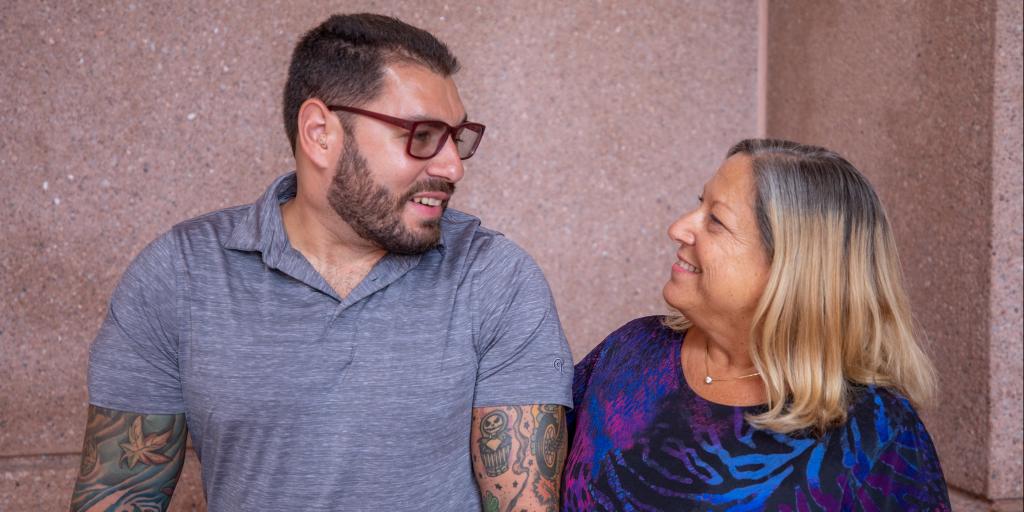 The sense of freedom from gripping the throttle, the breeze hitting his face and getting a good sweat from the gym, was all that was on U.S. Army Veteran Michael Meltzer’s mind on the morning of July 15, 2019, as he made his way to Florida Atlantic University (FAU).

Within a blink of an eye that ride of freedom turned into red wailing siren lights, doctors surrounding him on a hospital bed, and the sound of monitor alarms ringing.

A mother’s worst nightmare was Marcy Meltzer’s reality. Marcy watched from an observation window as her son’s life was in the hands of a medical team. She says, “It was like a movie, what you see on television.”

The broken bones and ruptured arteries from the collision could not stop his heart from taking its last beat.

For six months Michael’s eyes remained sealed shut in a coma, but his mother knew what she refers to as his ‘go-getter spirit’ that the day would come when his eyes would open.

Known as ‘tenacious’ from his military service days, little did the trauma doctors know all that his strength was capable of and how many medical predictions he would prove wrong.

From being limited to push buttons to signify a response of ‘yes’ or ‘no’ to now able to speak and move on his own, there is nothing Michael can’t do.

His mother says with a wide grin, “The medical review and predictions were that Michael would not awake or be able to do anything again, that he would be bedridden for the rest of his days, but I did not believe it.”

The faith in her son surpassed the medical advice from community hospitals for what was thought to be Michael’s future.

Once he was discharged from the hospital, Marcy was left to what she thought was to care for her son alone. That all changed, when the relief of the Home-Based Primary Care (HBPC) team from the West Palm Beach VA Healthcare System came to not only her son’s aid, but hers too.

The team of doctors, physician assistants, dietitians, social workers, psychologists, and physical therapists brought a sense of ease to their new way of life at home.

Marcy says, “I was overwhelmed when they first came. They were just amazing; they took such a burden from me. They helped Michael progress to where he is today, because of their care. I had nowhere to turn, they were there for me. They would comfort me and boost my energy and emotionally it helped me a lot because I was by myself.”

As Michael progressed, the team would adjust his personalized health plan and continue to advance his development based on his new needs.

‘Miracle Michael’ as his family and friends call him, says, “I am very thankful for the help given. They [HBPC team] helped me when I could not help myself. Everything from the diet to the mental health, that was all of them. They really stepped up and took care of me.”

The more Michael became alert, the more he was abruptly forced to digest his new reality. As he gained the ability to speak again, he looked at his mother and said, “I need help.”

All of the physical exercises to regain his mobility as he worked to break from the restriction of being bedridden were only targeting the exterior aspect of his recovery, with the missing piece of his interior mindset and wellbeing. That is where mental health stepped in as part of the HBPC team.

He says, “The VA helped me think about my goals and how to achieve my goals. My quote that I live by now is, ‘If you cannot survive the bad, you will not live to see the good.’ Your worst day should not be your last. I am much more capable now compared to the first day I came home. There is always something that can be done, whether it is working out or talking to someone, there is always something you can do to improve you.”

Beyond his mental health therapy, Michael too sought out ink therapy with his two arms now completely covered in tattoos as his way of telling his story. Found on the art displayed across his arms is the quote he now lives by, and one tattoo in particular represents his ever life-changing event with his once motorcycle wheel paired with a set of wings.

Although many changes, from tattoos to almost twenty procedures later, one thing that remains is Michael’s determination. He will soon walk across a graduation stage with a diploma in hand of a master’s in science in Geomatics Engineering from FAU. He is living proof miracles do happen.

As a once pronounced dead Veteran, he says proudly to his fellow Veterans brothers and sisters, “But, I came back, and so can you.”