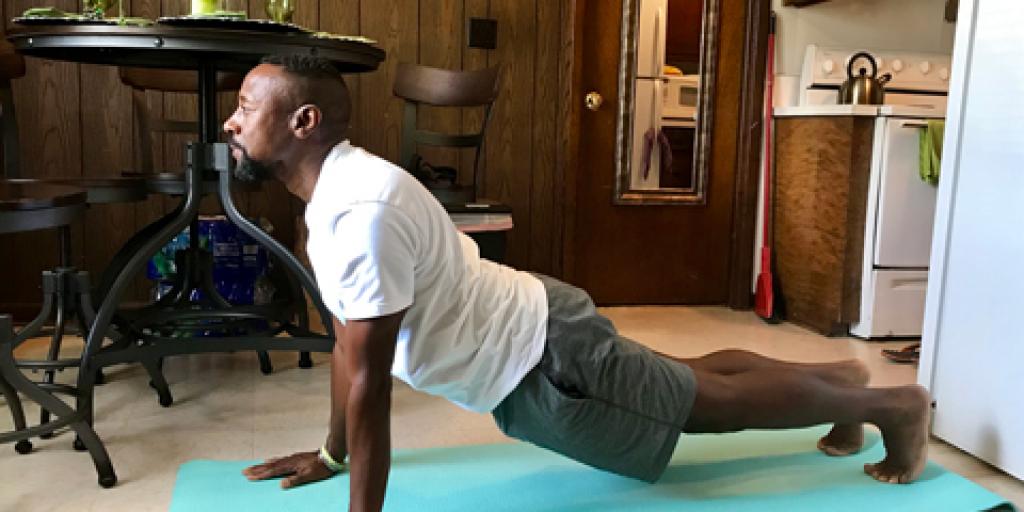 Chronic pain is an experience that many Veterans know all too well, and the devastating effects that it can introduce into a Veteran’s life can have drastic consequences.

According to a study completed by the National Institutes of Health, 65.6% of Veterans reported having pain over a three-month period, with 9.1% having severe pain. Severe pain was 40% greater in Veterans than non-Veterans, especially among those who served in recent conflicts.

One of the Veterans featured in the recent panel, Darryl Gadsden, has battled with painkillers since his service in the Army in the mid-80s. His life is a testament to how even the strongest soldiers can succumb to addiction and substance abuse in the face of chronic pain.

Gadsden suffered a debilitating back strain due to the heavy toll of training with a 65-pound kit during a 13-mile march for field exercises. The pain he felt that day was so excruciating he was transported by medevac from the field to the local hospital with what medics thought was a heart attack.

“It felt like someone had driven a sword through my back,” Gadsden explained. “Like they had shattered my ribcage. I was afraid to breathe, because every time I would inhale pain would stretch from my back into my chest like my ribcage was caving in.”

When he reached the hospital, doctors told Gadsden he had scoliosis that was aggravated by the heavy load he was carrying. They treated his pain with morphine and a prescription for oxycodone.

“It was love at first sight for me,” Gadsden said. “It was like magic and the pain instantly went away.”

That began his treacherous trek with prescription painkillers. After taking orders to Alaska, Gadsden continued to use painkillers to combat his chronic pain.

“I thought maybe the change to Alaska would do me some good; it didn’t,” he said. “The climate really changed me, and the pain was so bad some days that I wanted to end my life so that I wouldn’t have to feel it anymore.”

Gadsden decided to push through the pain, and eventually left the Army to go back home to South Carolina. He took a job with the Department of Transportation for the state and continued to self-medicate with painkillers.

“I became my own doctor,” he said. “I started mixing the pills with alcohol and got to the point where I would take them even when I didn’t need them.”

After a few years, Gadsden realized a dream to become a firefighter and used that motivation to cut back on the pills while he trained to get ready. His application to the fire department was accepted, and Gadsden quickly proved his worth when he saved an apartment from a dangerous fire within the first six months on the job. In fact, he was even nominated for fireman of the year his first year on the job.

Even though his dreams were realized, Gadsden just couldn’t shake the pull of addiction, and the heavy strain the physicality of his new career took on his body made matters worse.

“It was a haunting feeling,” he explained. “It was like my addiction was pulling me. I couldn’t shake it.”

Gadsden said he felt like he was out of control, and he became so worried that he might cost someone their life while he was high on painkillers that he decided to quit the job he worked so hard to get. That became the first step in a downward spiral that led him to rock bottom.

“My motto was to just push through it,” he said. “I pushed, and I pushed until I became a full-blown addict. I lost everything. My job, my car, my family, and all my money. I was homeless, and I just kept wondering, ‘How did I get here?’”

For the next two decades, Gadsden struggled with his addiction and homelessness, battling to survive on the streets while remaining detached from the life he had before his downward spiral. He frequently fell out of touch with his daughter, Roshina, whom he had after a casual relationship shortly after leaving the Army. He said that his disconnection from her was one of his biggest regrets from his struggle with addiction.

After years of falling into the daily trap of substance and alcohol abuse, Gadsden finally decided to try out some VA programs he had heard about. Using group meetings and the rehabilitation program, he was finally able to get sober long enough to find a plan for his pain management.

“I made a choice that I wanted to live,” he said. “I checked myself into rehab at the VA and started doing the work to get plugged into the program and work with doctors to get rid of my dead weight. I was finally able to deal with the trauma that I went through.”

Part of his process led him to realize that opioid painkillers were not compatible with his addiction. Gadsden worked with the pain management team and Homeless Patient Aligned Care Team Physician Dr. Elizabeth Call to find a pain management plan that worked for his recovery.

“Through alternatives to opioid pain medication and treatment for depression, Mr. Gadsden achieved control over his pain,” Dr. Call said. “He is a changed man! Although he still copes with daily pain, I am so proud of his ability to focus on living and enjoying his life. He was able to use the whole health services available and placed faith in his providers who truly care about him. He reminds me of why I chose to become a physician.”

Gadsden has been able to use alternative treatments, such as yoga, mindfulness, and acupuncture, to remain clean and sober for the past four years now. As part of his process of recovery, Gadsden was even able to reconnect with his daughter and his now 9-year-old granddaughter and create the family he once lost to addiction.

Through his addiction, Gadsden lost his dream job, the love of his life, and the chance to be the father his daughter needed. In recovery, he has been able to rekindle that relationship, and build the connection with his granddaughter that he never could with his daughter.