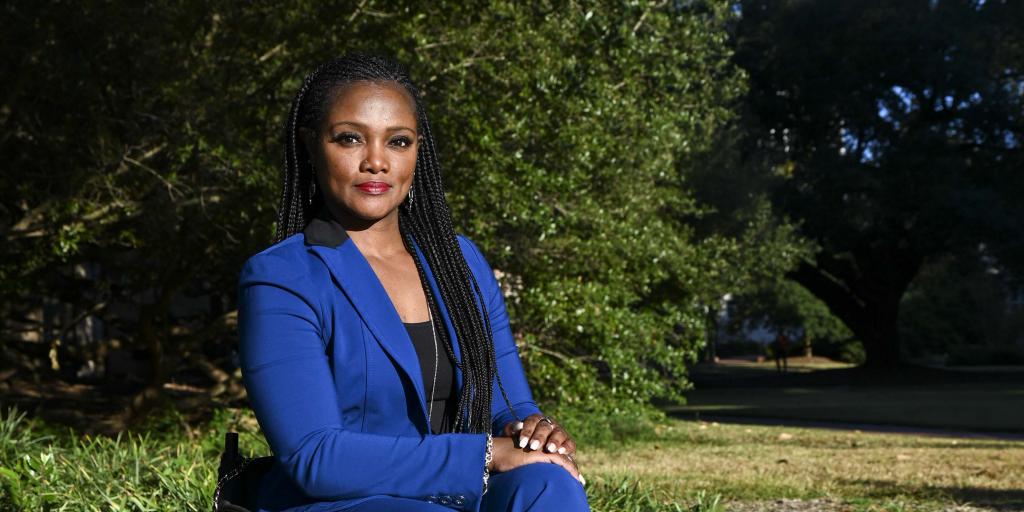 Despite growing up in a tumultuous environment that included being the daughter of high school students turned drug addicts, suffering abuse at the hands of a family member, and surviving a suicide attempt, Centra “Ce-Ce” Mazyck did not let her trauma define her future.

Upon graduating from high school, she set off on her own and enrolled at Bauder College in Atlanta. While enrolled at Bauder, Ce-Ce enlisted in the Army Reserves to use the educational benefits that military personnel receive.

After earning her associate’s from Bauder, Ce-Ce transferred into the Army’s active-duty component and received orders to the 82nd Airborne Division, out of Ft. Bragg, North Carolina.

Before reporting to Ft. Bragg, Ce-Ce first needed to attend airborne training at Ft. Benning, Georgia. One of the first things the instructors told the trainees upon arrival was that if they did not want to be there, all they needed to do was say so. That’s just what Ce-Ce did.

“We were in formation, and I remember saying ‘I cannot do this.’ I broke ranks, and [knocked on the airborne instructor’s door],” Ce-Ce said. Upon telling the instructor that she did not want to be there anymore, the instructor asked her to look out her office window at the ranks of trainees. She asked Ce-Ce, “How many females do you see in that formation?”

“Next thing you know I was jumping out of airplanes,” Ce-Ce laughed.

When her tour with the 82nd ended, Ce-Ce received orders to the Army Jump Master School, where she was required to earn her Jump Master certification. On final day of training, tragedy struck.

“I got to the door and jumped. When I jumped a gust of wind hit me like no other time before,” she said. “All I heard in the midst of all that was ‘Slip away, slip away!’”

Ce-Ce collided with another soldier, resulting in their chutes becoming tangled. The two were now plummeting 800 feet with only a single chute catching wind. Roughly 10 feet above the drop zone, the two broke loose, but it was too late for Ce-Ce to adjust her landing.

“Once I hit the ground, I just said ‘Damn, that was a hard hit,’ then I tried to get up, but my legs weren’t working,” Ce-Ce said. The last thing she remembers is writhing in pain in the back of a Humvee and getting her boots cut off at the hospital.

Upon waking up Ce-Ce’s mother told her that the doctors didn’t think she walk again. She immediately got to work, determined to take her life back to be there for her infant son, Tristen, and prove her doctors wrong.

“I had some hard days in rehab,” Ce-Ce said. “Trying to walk again, and vomiting after trying to take two steps, it took a lot out of me. But I was determined.” Despite her grim prognosis, Ce-Ce was walking on forearm crutches less than four months after the incident.

During her rehabilitation, Ce-Ce was introduced to wheelchair sports. After her first competition in 2005, Ce-Ce was hooked. “I felt like I was back in the game. I felt good,” Ce-Ce said. “I had all these individuals surrounding me that made it through and were doing so well, and it made me feel like that could be me on the other side.”

Over the course of the next several years Ce-Ce found her niche, the javelin, and competed in more and more events. She became highly accomplished, acquiring more than 50 medals, and began receiving invites to some more exclusive competitions. This led to her catching the attention of the coaches for the Paralympic team. In 2012, at a Paralympic trial event in Indiana, she had the best throw of her career and landed a spot on the 2012 Paralympic team.

After her 2012 run, Ce-Ce stepped away from the wheelchair games due to the Paralympic committee removing the javelin from the 2016 Paralympics and a history of shoulder and rotator cuff injuries. However, she recently got back on the Wheelchair Games circuit. In August, Ce-Ce competed in New York, where she continued her habit of medaling, as she won gold in powerlifting and silver in adaptive fitness.

“I’m more accustomed to jumping out of planes, so this was something totally new to me,” Ce-Ce said. “It was an amazing experience though; the weightlessness was such a unique sensation.”

“That flight was historic because it was an important first step toward making space travel something that disabled individuals aren’t barred from,” said Ce-Ce. “I cannot wait to go to space!”

In 2010 Ce-Ce fulfilled her goal of obtaining her bachelor’s when she graduated from the University of South Carolina with a Bachelor of Science in Sociology and a minor in women’s studies. She said that she’s considered furthering her education and possibly becoming a therapist.

Today Ce-Ce spends most of her time at speaking engagements across the U.S., inspiring and motivating people to push through the hard times and strive to be better. Her parents are both drug-free and Ce-Ce’s relationship with them has healed to the point of regular conversations with her dad, and nearly daily correspondence with her mother.

“Success is very personal, your success is not my success,” Ce-Ce said. “For me, when you have reached a point in your life where you’ve reached your goals or aspirations, and everything just flows in your life; You’re happy, you’re loved, you’re living life to the fullest, and not just existing. That’s success to me.”

Learn more about how VA is improving Veterans experience at va.gov/ve.