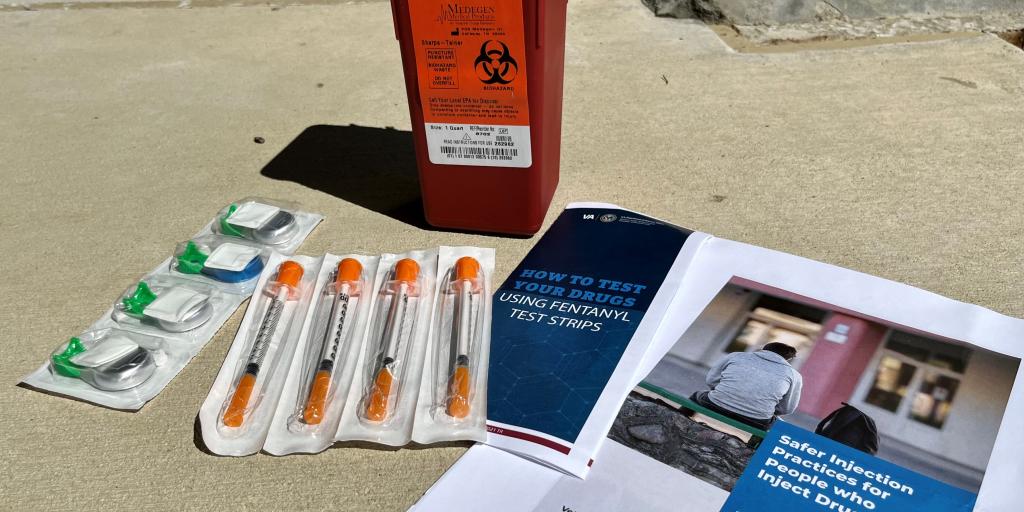 The United States is seeing unprecedented numbers of overdose deaths involving illicit opioids (such as fentanyl) and stimulants (like cocaine or methamphetamine).

VA is helping Veterans access tools to reduce their risks associated with drug use through syringe service programs (SSPs), an initiative first implemented within VA by staff at VA Illiana. Participants can access supplies and services in a welcoming, non-judgmental environment. For Veterans who receive their care from VA Illiana, SSPs are available in Danville, Champaign,  Peoria, and Springfield.

SSPs are harm reduction programs. This means they prioritize keeping people safe and alive ahead of eliminating drug use. Connecting Veterans with the tools they need to reduce their risk of death or serious illness is an effective harm reduction strategy.

Syringe service programs have existed in communities in the U.S. for over thirty years and they provide much more than sterile syringes. SSPs provide overdose education, naloxone, testing for HCV and HIV, screening for sexually transmitted infections, and linkage to treatment. According to the Centers for Disease Control and Prevention (CDC), “SSPs are safe, effective, cost saving, do not increase illegal drug use or crime, and reduce transmission of viral hepatitis, HIV, and other infections.”

A misconception is that harm reduction programs enable drug use, but the facts tell a different story. Participants who use SSPs are five times more likely to receive treatment for substance use disorders and three times more likely to stop injecting drugs. Harm reduction embraces the concept of “any positive change” and celebrates small steps moving towards healthier living. Often, taking smaller steps can be less intimidating and more realistic. In time, this can help a Veteran achieve bigger, more sustained change.

Harm reduction isn’t limited to providing sterile syringes. Harm reduction can be applied to all drugs, including legal ones like alcohol and tobacco. People who use recreationally or experimentally can also be at risk of life-threatening consequences, including overdose. People who are addicted may not be ready or interested in treatment. In addition, people who may have been abstinent can have episodes of returning to use. Harm reduction supports people no matter where they are in the spectrum of drug use, ranging from chaotic to abstinence-based recovery.

VA is committed to keeping all Veterans safe and alive by using a harm reduction approach. Shame and stigma around drug use and addiction can make people feel alone and keep them from seeking help. Talking about drugs and engaging people who use them allows VA to provide Veterans more compassionate, inclusive care. VA Illiana  was the first VA Health Care System to provide sterile syringes to Veterans who inject drugs, directly working to prevent deadly infections and save lives. Since VA Illiana launched their SSP, more than ten other VA Health Care Systems have launched similar programs and many more are in progress.

VA Illiana also provides fentanyl test strips to patients. These strips are used to detect if illicit fentanyl is present in heroin, cocaine or pills obtained outside a pharmacy. These are useful for patients who use drugs by any route of administration, including injection. Additionally, VA provides medication for opioid use disorder which decreases rates of death (called buprenorphine, pronounced bew-pre-nor-feen) and pre-exposure prophylaxis (PrEP), a medication to prevent HIV among people who inject drugs. Finally, Veterans can also access naloxone without a co-pay, a lifesaving medication anyone who uses drugs should have.

Your life matters. Try to avoid using alone and if you do, call the Never Use Alone Hotline or use the Canary – Prevent Overdose App. Carry naloxone and, if able, and test the drugs you use.