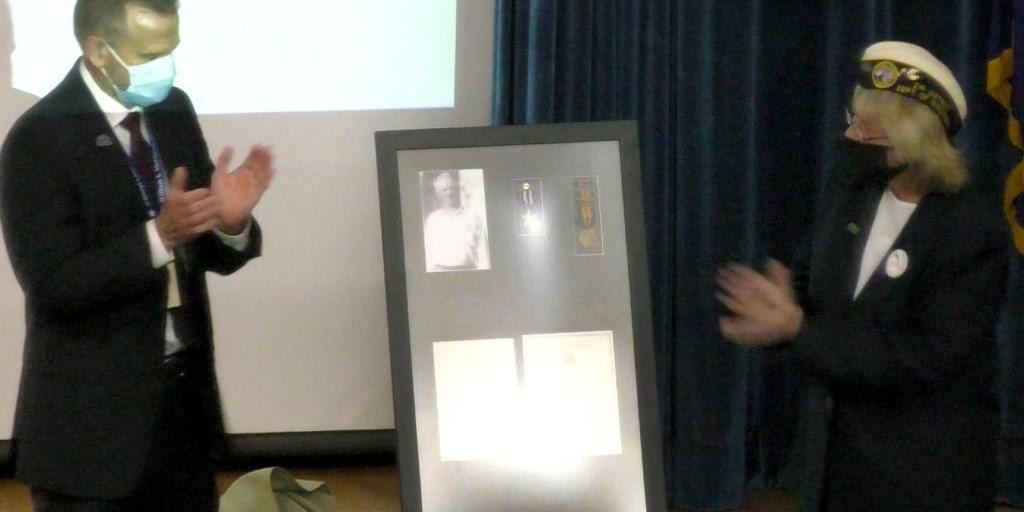 Hospital Director John Rohrer and Cathy Price, the granddaughter of Sgt. Thomas Feeney, unveil the plaque to be placed in the Hall of Heroes.
By Paul Rickert, Chief, Public Affairs
November 16, 2021

The William S. Middleton Memorial Veterans Hospital in Madison posthumously inducted Sergeant Thomas Feeney into their “Hall of Heroes” at an online ceremony on Wednesday, Nov. 10th at 11:00 a.m. in the hospital auditorium.

Feeney’s family, including his daughter Ruth Seeber, attended the ceremony to accept the honor.

“The Hall of Heroes is an inspiration to all of us here at the Madison VA Hospital, and those who visit us,” said hospital director John Rohrer. “We are honored to celebrate Thomas’ heroism with his family.”

Feeney’s granddaughter Cathy Price wrote a short biography of Feeney’s life and shared it with those in attendance.

Born in Ireland in 1896, Feeney originally tried to join the British Army during World War 1. After they discovered he was only 17, he traveled to America by ship and served two consecutive terms in the Us Army.

During his second term with Company C, 60th Infantry, 5th Division in battle to reduce the St. Mihiel Salient and the massive Meuse-Argonne Offensive his valor earned the Silver Star Medal.

Hospital Director John Rohrer and Cathy Price, the granddaughter of Sgt. Thomas Feeney, unveil the plaque to be placed in the Hall of Heroes.

The following officers and enlisted men are cited in orders for distinguished conduct in action:

His Platoon Commander being killed and the platoon suffered many casualties, he took charge of the remaining men and under severe fire organized them and by his personal valor and leadership inspired them to advance, clearing up all enemy resistance before them until they reached the line of consolidation.

After his service Feeney settled in Fort Atkinson where he worked as a mason contractor and later farmed with his wife, Henrietta Peterson. He passed away in 1980. He was survived by his daughter, five grandchildren and five great grandchildren.

Those who missed the live ceremony can still view the event on the hospital’s Facebook page here.

The Hall of Heroes is located on the first floor of the William S. Middleton Memorial Veterans Hospital in the main corridor on the wall near the Patient Education Resource Center.

Silver seals of the five branches of military service and the wording “Hall of Heroes” are permanently displayed.

The Veterans selected to be honored have their photograph and information about their personal awards and citations for heroism or valor displayed. Including Feeney, a total of fourteen Veterans have been honored since 2002.

The criteria for induction is as follows: Veterans should have been decorated with a personal award and citation for heroism or valor. Awards are reviewed and authenticated with a release form signed by the Veteran to authorize the required verification. Awards will be ranked following military ranking, i.e. Congressional Medal of Honor being the highest possible decoration. Multiple awards for bravery, receipt of a Purple Heart, and prisoner of war status will also be considered.

Submissions of potential honorees are welcome from individual Veterans, County Veterans Service Officers, service organizations and others. As an on-going project, submissions can be sent at any time. Instructions for submissions for the consideration of the Hall of Heroes Committee can be found at: https://www.madison.va.gov/hall_of_heroes.asp

Each submission should include copies, not originals, of awards and citations, a completed authorization for verification form, and a completed submission coversheet.

Questions and completed packets can be emailed to VHAMADHallofHeroes@va.gov.

For more information about the Madison VA Hospital, visit www.madison.va.gov or www.facebook.com/MadisonVAHospital.