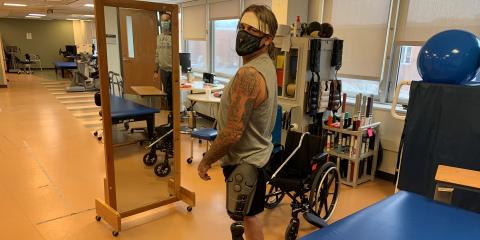 Marine Corps Veteran and Bethel Park native Jim Mechenbier hopes to ride his motorcycle again with his own two legs – one flesh and one prosthetic.

In 2015, he was in a motorcycle accident and broke his left leg in nine places. He lost all the cartilage in his knee and underwent a three-inch bone graft.

“The pain started getting so bad I couldn’t take it,” he said.

A VA Pittsburgh surgeon gave Mechenbier three options: do nothing and continue to live with pain; allow the surgeon to remove everything from Mechenbier’s knee and fuse his upper and lower legs which would leave his leg immobile; or amputate.

“I told my dad about fusing my leg, and he said that’s no good, then you can’t ride your motorcycle,” he said.

Mechenbier chose amputation because he thought it was his best option. VA Pittsburgh surgeons performed the above-the-knee amputation in January 2021.

It typically takes six to eight weeks to create a prosthesis for an amputee, but Mechenbier received his in just three thanks to the work of VAPHS supervisory orthotist/prosthetist Andrew Chambers and his team.

Working with Chambers and his team following the amputation, Mechenbier was able to stand in just two weeks and walk in three. He was thrilled to receive his new prosthetic leg at the end of March and requested a video of himself using it to show his parents and wife. He even asked about when he could ride his motorcycle.

“Working with the team, they’ve been incredible,” said Mechenbier. “I can’t even put into words how great they are. Not just Andrew, but also all the nurses and physical therapy staff when I was staying at rehab for a week. Everything was just incredible, you felt like you were at home.”

Mechenbier’s leg prosthesis required initial adjustment, but he soon adapted well, walking around by himself without assistance and successfully managing daily activities.

“It’s like being two years old trying to learn to walk all over again,” said Mechenbier. “So far I’ve been able to do everything I used to do before. I just have to learn to slow down a little bit. I try to go the same speed now.”

In addition to riding his beloved motorcycle, Mechenbier looks forward to participating in bass fishing tournaments and simply enjoying relaxing on Pennsylvania’s many bodies of water.

“I’ve been riding motorcycles since I was five years old, it’s part of me,” said Mechenbier. “It’s great to feel the wind in your face. It’s the closest thing you can get to flying.”

Chambers is grateful for his team’s hard work and effort that led to Mechenbier walking with his new prosthetic.

“This doesn’t happen without them and their expediency to get these types of outcomes,” he said. “I wish more staff could have been in clinic to share in this moment. They’re changing lives for the better.”