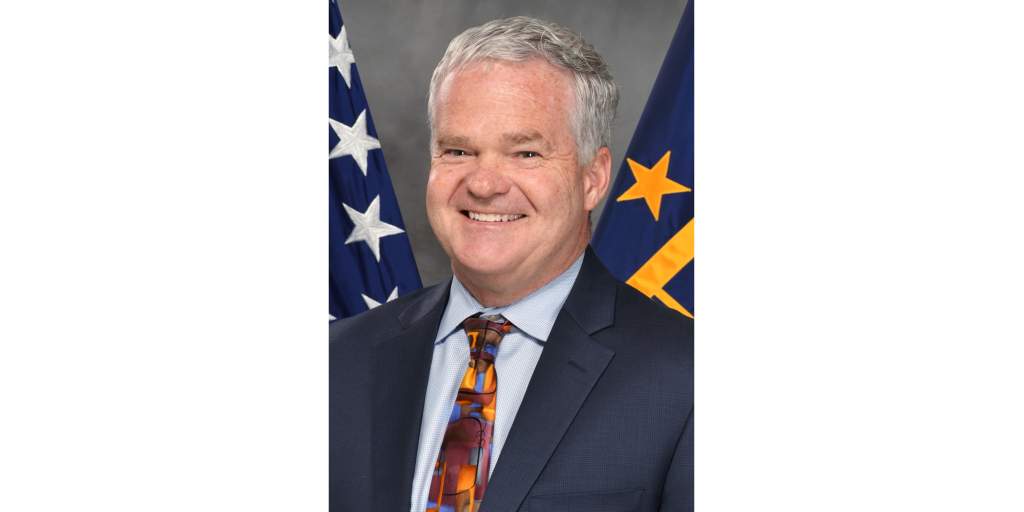 When VA Puget Sound Health Care System Executive Director Michael Tadych moves into his next job with VA’s Office of Inspector General, a key part of his job will be on promoting efficiency, effectiveness and integrity across the Department of Veteran Affairs.

He’s had lots of practice doing these the last five years heading up VA Puget Sound—a position he leaves April 8, 2022.

“Mike Tadych has been the consummate professional and friend to your Washington Department of Veteran Affairs, and to me,” said Washington State Department of Veterans Affairs Director Lourdes E. ‘Alfie’ Alvarado-Ramos. “He stands out from those who preceded him for his dedication, advocacy and compassion towards not only his patients, but also his team. He epitomizes servant leadership and I wish him fun and success in his next position and all his future endeavors. You will be missed!"

Tadych has enriched the lives around him, empowered the VA Puget Sound team to be its best and always put the needs of others first—with those of the Veterans front-and-center. Under his leadership, there have been measurable improvements in quality, business practices and financial management practices. And today, VA Puget Sound is widely recognized as leading VA health care system.

“I am so grateful for this opportunity to recognize Mr. Tadych prior to his departure.  Mike will be remembered by so many for his invaluable contributions, servant leadership, and never-wavering dedication to the VA missions,” said Veterans Integrated Service Network 20 Director Dr. Teresa Boyd. “One of the things I most admire about Mike is his calm, confident approach, which he applied to every challenge. His ability to manage extremely complex and conflicting priorities while ensuring that every member of his team felt seen, heard and valued. He is humble in his achievements. Holding up others without a thought to his own recognition.”

VA Puget Sound is the highest complexity heath care system in the Veteran Health Administration, with more than 5,000 staff—a 35 percent increase since Tadych took the job in May 2017. The team cares for nearly 156,000 (up 7.6 percent since 2017) Veterans enrolled with a primary care team at one of its 10 care sites across Western Washington. Outpatient care increased by 10.5 percent in just the last two years, with 1,136,615 outpatient visits in Fiscal Year 2021.  And over the course of the pandemic, virtual care increased by 630 percent.

Together with the University of Washington School of Medicine, VA Puget Sound’s premier academic medicine program ensures professional staff deliver the highest caliber quality of care by providing access to the latest pharmaceutical therapies and diagnostic techniques.  The cohesiveness and strength of VA Puget Sound’s research community—the 4th largest in the VA—is felt throughout the not only the Pacific Northwest, but across the nation, with research in virtually every major clinical department from memory improvement and Alzheimer's Disease to diabetes and genomics.

It is home to seven nationally recognized Centers of Excellence in areas from limb-loss prevention and prosthetic engineering to primary care education and substance abuse treatment.

VA Puget Sound has also taken on a unique position to advance change and positively disrupt the way America delivers health care. VA Puget Sound is part of the VHA Innovators Network and launched VA Ventures last year. It is focused on advancing the use of innovative technologies to support personalized care, from bioprinting bone grafts and mobile prosthetics to artificial intelligence and robotics—all aimed at providing superior care and the best health outcomes to Veterans.  3D printing solutions help radiologists better visualize patient anatomy and disease for diagnosis, surgical and treatment planning–improving health outcomes, reducing time to treatment and enhancing the patient experience. Another example of driving innovation, specifically during COVID-19, is the universal Powered Air Purifying Respirator hood the VA Ventures team developed to protect health care providers from exposure to infectious disease. The hood is interchangeable across multiple respirator systems, is designed for cleanability, and uses U.S. sourced materials.

Planned growth and development making getting care easier for Veterans

To better serve Veterans by making getting care easier, Tadych oversaw the expansion of its primary care footprint in Western Washington which became visible to the public in March 2019 with the opening of its $121.6 million Mental Health and Research Facility at its Seattle campus. On its heels in November 2019, VA Puget Sound opened the doors to its $9.7 million, 15,000-square-foot outpatient clinic in Silverdale. That was followed in December 2019 with the opening of our $4.3 million, 14,000 sq. ft. Community Resource & Referral Center in the Georgetown neighborhood of Seattle. The closure of its contract-operated clinics in Lake City, Federal Way and Bellevue in January 2021 made way for three new VA-operated outpatient clinics that opened in 2021: Edmonds (5,368 sq. ft.) opened in June; Puyallup (5,272 sq. ft.) in July; and Olympia (9,739 sq. ft.) welcomed patients through its doors in August. Those new outpatient clinics paved the way for the closure of its remaining contract-operated clinic in Chehalis in October 2021 which had been the VA’s most expensive contracted care clinic across the nation. It’s new $10 million, 26,000 sq. ft. outpatient clinic in Everett is on track to open this summer. And VA Puget Sound continues to explore other outpatient clinics in other areas like Auburn or Woodinville.

This planned growth and development better supports the two major metropolitan areas in Western Washington (Everett and Olympia) which previously did not have VA facilities—a move validated by the VA’s Asset and Infrastructure Review (AIR) recommendations and findings (released in March 2022). The AIR Commission recommendations are the result of a congressionally mandated VA study of the current and future health care needs of Veterans across America as part of the VA MISSION Act in 2018. Future recommended changes over the next decade include opening a third main campus in Everett with services like those offered at its American Lake campus (would replace the outpatient clinic there), opening of a Community Living Center in Everett, conversion of its Seattle campus Community Living Center to a Transitional Care Unit to better support inpatient needs and eventual move of dental services from its Mount Vernon clinic to the Everett main campus when opened. Combined with one of the recommendations for VA Portland Health Care System to open an outpatient clinic in Longview, Washington, VA Puget Sound’s sound ongoing and future care footprint will better support the greatest population of its health care eligible Veterans.

Along with supporting patient growth, increased inpatient and outpatient care, expansion of its primary care footprint, Tadych has also been instrumental in VA Puget Sound’s journey to be a high reliability organization. Proof of its continuing strides towards excellence, VA Puget Sound’s Community Living Centers shifted from 1 (of 5) overall star quality ratings in 2017 to 5 stars in 2022. The assessments are based on the quality of the care Veterans receive as well as VA staff’s ability to make informed health care decisions in accordance with Section 206 of the Veterans Access, Choice, and Accountability Act of 2014. VA Puget Sound also ranked 79 of the 126 VA health systems nationally for hospital associated infections in 2017. Today, it is ranked 39 of 126. And it is in the top 10 percent for its wait time for new patients seeking mental health care.

“Mike’s social work background naturally set him up as a great co-chair for the VISN 20 Rehabilitation and Extended Care Integrated Clinical Community focused on streamlining communication flows that amplify the voices of frontline employees and allow for efficient decision-making and implementation of best clinical practices. In addition, he mentored and encouraged staff at every level to reach their highest potential - a testament to his commitment to the professional development of others and the success of the VA,” said Dr. Boyd. “In times of turmoil, Mike proved a steady and reliable leader, providing great counsel to those in need of an “ear.”  He was unwavering in the way he modeled VA’s ICARE values as well as the Fair, Open, Cooperative, Supportive and Empowering of the Diversity and Inclusion Program.”

A catalyst for positive change, Tadych has been committed to supporting an exceptionally equitable and an inclusive work environment that is healthy for employees and meets the needs of all the Veterans served by VA Puget Sound. This is evident by the more than a dozen active grassroots diversity, equity and inclusions committees and workgroups actively engaging in work to grow a diverse workforce and cultivate an inclusive work environment where staff are fully engaged and empowered to deliver the outstanding health care services.

“Mike will be greatly missed but leaves a lasting legacy,” said Dr. Boyd. “He is the kind of leader we all aspire to be.”

One of many examples of Tadych’s legacy: The VA’s Annual All Employee Survey's key marker of Best Place to Work increased by 11.8 percent since 2018 at VA Puget Sound, stronger improvements compared to those across VA nationally.

“The organization couldn’t be better position for the future, which makes my departure bittersweet,” said Tadych. “I take comfort in knowing the VA Puget Sound team will continue to place our Veterans’ health care needs in the center of each and every decision.”

Dr. Thomas Bundt will be stepping in as acting executive director while a search for Tadych’s replacement is completed. Bundt was appointed deputy executive director September 2021, bringing to VA Puget Sound a history of executive health care experience at the Department of Defense and Defense Health Agency, including becoming the first market director for the DHA for the Puget Sound region.

“Dr. Bundt’s experience both here and at the Department of Defense gives me reassurance that we have a proven leader stepping up to guide this organization to its full potential,” added Tadych.

And to Veterans and staff alike, Tadych said: “It’s been an honor serving you.”