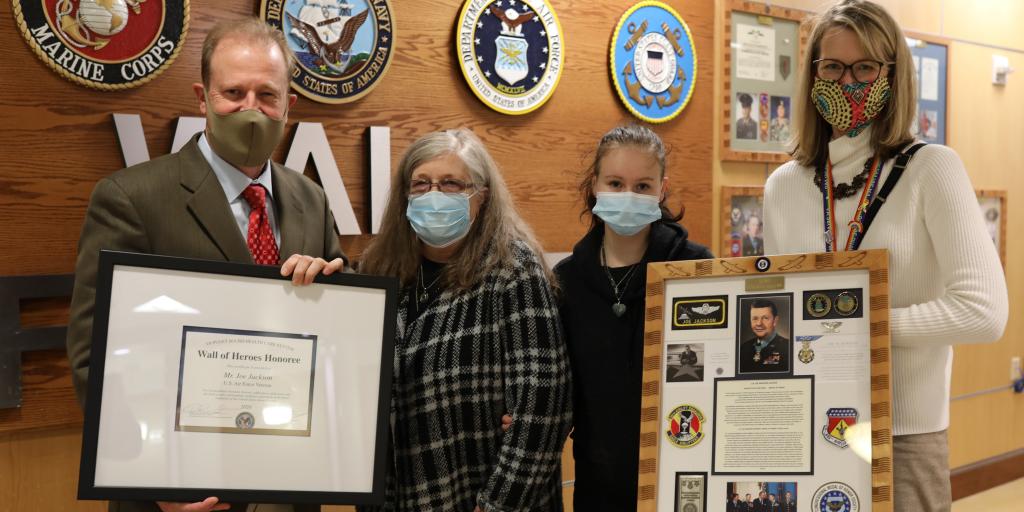 An auto mechanic by trade, Col. Jackson enlisted in the Army Air Corps in March 1941. Starting as a plane mechanic, he eventually moved to flying jets, was the second Air Force U-2 pilot and went on to fly C-123 aircraft.  He flew more than 100 combat missions in Korea and almost 300 in Vietnam. The latter earned him the Medal of Honor for actions on May 12, 1968 for his part in the evacuation of Kham Duc while under fire. His medal was presented by President Lyndon B. Johnson at a White House Ceremony January 16, 1969.

His list of exemplary contributions is endless, with many accounts archived by the Library of Congress. Col. Jackson’s daughter believes that her dad’s involvement in the Cuban Missile Crisis was the thing he was most proud of.

While his career is well-known and led to his selection as a Wall of Heroes Honoree, Bonnie was delighted to share some aspects about her dad that some may not know.

“Trivia or a bad dad joke was a requirement of each family meal,” Bonnie shared with a warm smile.  She recalled one of his favorites: “What president kept an alligator in the White House bathtub? President John Quincy Adams.”

Kind, generous, humble, smart, and funny are among the many positive things that come to mind when people think of Col. Jackson, who spent every Monday for 25 years collecting food for the Kent food bank.  He last read (Bonnie shared he read it many times) the U.S. constitution front-to-back was when he was 93—just to ensure he could have educated debates with Bonnie and her brother, David. He completed both his undergraduate and master’s degrees at night. And while he eventually bought his own plane, he began building an airplane in his basement in the 1970s (something Bonnie compared to the boat Gibbs in the TV show NCIS was building in his basement).

“Thank you for considering me worthy to join this auspicious group of real heroes,” Dr. Hyde, 98-years-old, said during his recognition ceremony at VA Puget Sound November 11, 2021. “In accepting this honor, I feel like I am a representative of many Vets who during WWII survived, may have endured hardship, but performed what they were experienced and trained to do and after the war have done his/her best to become great citizens of the United States of America. It is from this group that I was chosen and humbly accept this recognition as a representative.”

Dr. Hyde’s medical school and subsequent 37-year medical practice that included the delivery of more than 1,500 babies, was “interrupted after the first two years for a four-year military service,” he described in his memoir. “My military service was sandwiched halfway through my college work.”

As for the military service he squeezed in as he completed his medical degree, his numerous heroic contributions include fighting in the Hartz Mountains located in the highland area of north France during World War II. “Our platoon advanced successfully and took over a German entrenched unit protecting the top of the mountain,” he described. The next morning on the way to a welcomed hot breakfast, a bombshell exploded injuring him and two other soldiers.

For his heroic contributions, he was recognized for his service in France during World War II with the Legion of Honor medal, France’s highest order of merit for military and civil awards at the French Consulate in San Francisco on February 12, 2019.

Recalling Alsace, France, Dr. Hyde recalled sitting on the grass at Epinol American Cemetery contemplating the seemingly endless rows of crosses that represent nearly 5,300 fallen American soldiers, “Each of us has a story to tell, with teary eyes I realized these young fallen soldiers each marked by a cross, never had the opportunity to tell his story.”

Among his abundance of blessings, Dr. Hyde—who moved to Seattle to be closer to family—is most thankful for his daughter Diane, her husband Paul and their daughter Gina, and his son Douglas, his wife Sheria and their children Taja, Kailin and Cooper. “I love them very much and I feel loved by them too,” he shared.

After his visit to VA Puget Sound, Dr. Hyde headed to a virtual meeting with a first-grade class to help them understand what Veterans Day means.

The Wall of Heroes serves as a reminder for patients, visitors, staff and volunteers at VA Puget Sound of the sacrifice, valor, bravery and heroism demonstrated by our Puget Sound Veterans. Our Wall of Heroes display, dedicated June 29, 2009, is one way we honor those Veterans. Framed biographic displays of each inductee are symbols honoring Veterans who have had significant contributions to those we serve at VA Puget Sound.

Each year, our Wall of Heroes Committee collects and reviews nominations, ultimately selecting one inductee.

For more information about this program, email the Wall of Heroes Committee at PugetSoundWallofHeroes@va.gov.