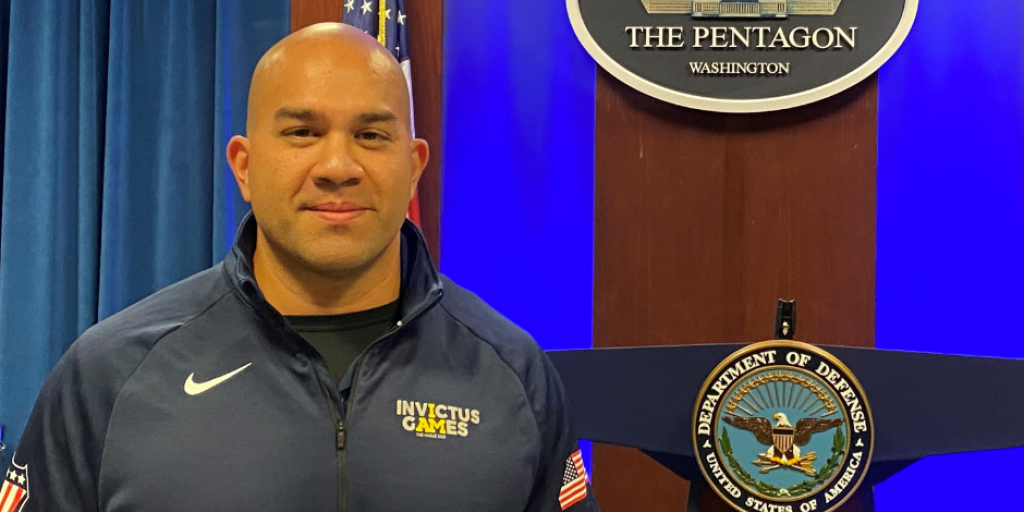 At first glance, Chief Petty Officer Phillip Fong looks like he could play linebacker for his favorite team, the Dallas Cowboys. The five-foot-10-inch, 250-pound machine looks invincible, and his soft-spoken demeaner is reminiscent of a gentle giant.

Although he looks ready for the gridiron, it was another recruiter who got to him first.

Fong is a veteran competitor who is representing the U.S.A. in the 2022 Invictus Games, April 16-22, at the Hague, in the Netherlands, and he has his eyes set on gold!

But Fong admitted he almost declined the invitation.

“If you had asked me in January, I would have told you I didn’t want to go because my mind wasn’t right,” said Fong, who is celebrating 20 years of military service this year. “But I’m in a totally different place from where I was four months ago.”

But Fong’s journey to Tampa VA and PREP actually began 14 years ago when he was serving overseas.

“Initially, I thought I had the flu,” said Fong who went through a couple of misdiagnoses before a weekend trip to the ER at Sigonella Naval Air Station, in Italy, resulted in his correct diagnosis.   “The doctors did full battery of tests and came back with two possibilities - cerebral malaria or Japanese encephalitis.”

Turns out Fong had both.

“My immediate reaction was, ‘Okay, let’s get this treated so I can return to duty,’” said Fong.

The young Sailor, only 25 years old at the time, spent two weeks in the hospital. Fong admitted that he still didn’t feel right when he was discharged but was comforted by the arrival of his parents which the Navy had arranged on his behalf.

After taking his father to the airport to fly back to the U.S., Fong returned home.

“I walked upstairs and lost where I was,” continued Fong. “I didn’t realize it, but I was having hallucinations.”

He went downstairs where his mother and wife were visiting and asked them who the men were that he saw upstairs. When they got to the top of the stairs, Fong remembers reaching out to his wife to catch him.

“From that point, everything went black,” said Fong. “I didn’t remember anything until I woke up at Bethesda.”

Fong was later told he had experienced a seizure. It would be his first of many.

The effects of that one attack regressed Fong’s capabilities mentally and physically.

“When I came to, my head was foggy, and I was told I lost my short-term memory,” added Fong. “[Doctors] told me I was going to have to relearn how to walk and talk because the motor functions were not there. I was really frustrated.”

During this time, he was approach about a medical retirement, but Fong said he had other plans. “My biggest goal was to get back on active duty,” admitted Fong. “I went to every therapy session because I knew I could do it; I told myself it wasn’t my time to get out.”

For years, Fong continued to experience issues with sleeping, headaches, and passing out that impacted his quality of life…and his military career.

Several years ago, he and his family received orders to the United States Special Operations Command (USSOCOM) at MacDill Air Force Tampa, Fla. After years of dealing with the side effects from his condition, Fong was no longer considered operational, and his move to Tampa included a new job with the USSOCOM Warrior Care Program.

Following his arrival, Fong began talking to friends from the USSOCOM Adaptive Sports Team who had been patients in PREP.

“I didn’t think I would qualify to get in the program,” admitted Fong. “But when I looked at [the PREP] application and all the areas they support, I had a check in every box.”

“The program has developed a strong relationship with the active duty Special Forces community,” added Merritt. Service members sustain a huge amount of physical, brain, and emotional traumas, and it’s vital that VA play a role in serving our frontline military service members.”

Fong was accepted into the program in 2019.

During this time, he experienced a unique aspect to PREP and VA. “This was the first time I could have my cardiologist and neurologist communicating on the same page,” added Fong. “They worked together to help me understand why my brain wasn’t working like it used to, and I was able to work with so many professionals who taught me how I could work to make myself better.”

During the six weeks he spent in the program, Fong admitted that he saw marked, sustainable improvement for the first time in a long time. He also had a chilling realization.

“If I could have come here years ago, my career could have possibly been longer, and I would have had a lot less stress,” admitted Fong. “It would have been a lot easier for my family, too, because I know they carry my stresses and worries with them.”

During his time in the program, Fong worked with Kathryn Bryant, a recreational therapist and self-titled “OG” of Prep who has been working with the program for 13 years. She said Fong is one of those patients who she will never forget.

“He’s muted intensity,” added Bryant. “He’s such a quiet professional, but he gives 100 percent in everything he does, particularly with supporting his peers in this program.”

Fong, admitted that Bryant left a lasting impression on him.

“She brings it every day,” added the soon-to-be retired Sailor. “She has so much energy, and I want to have that in my civilian career – whatever I choose to do – after the military.”

Fong, who has spent many years with the USSOCOM Warrior Care and Adaptive Sports Program, feels like he’s found his niche.

“I love sports, and I enjoy helping others find something they enjoy doing,” continued Fong. “I started coaching rowing and trying to be involved, and there’s nothing better that seeing someone get that light in their eye about training.”

After only six weeks in the program, Fong, along with other members of PREP, were sent home when COVID-19 restrictions were put into place. He admitted he came a long way, but still wasn’t where he wanted to be.

“I didn’t get done, and I didn’t meet my goals,” said Fong, “But I had enough to move forward, and I did well.”

Fong admitted for a while he felt good, but then issues began to resurface.

“I got to where I wasn’t sleeping again, and it affected everything,” said Fong. “My memory was going, my mental health was not good, and I struggled. It caused everything to snowball, and I felt like I was back down at the bottom.”

So, when restrictions lifted, he came back. Determined to finish what he started and meet his personal goals for the program.

This time, instead of being an in-patient, he was able to come in for treatment and immediately go back home.

“This really helped with my family because in PREP you learn all these skills, and we talk as a group,” continued Fong. “You get assignments, like homework, to work on things with your family that brings you out of your comfort zone, and it was great to work on things daily with people in the program and my family.”

Fong, said his experience here was life changing, and when he thinks back on his time in PREP, he does so with immense appreciation.

“Everyone fires on all cylinders; they really are a team,” added Fong. “From people like [Physician Assistant] Larry Miller, who is a Navy Veteran, to the nurses, and the recreational therapy team, they work together to make sure the quality of care we get here is great.”

Bryant understands all too well Fong’s point of view.

“What we do here changes lives,” added Bryant. We have the resources and the people to help them expand their base and improve their quality of life. You can see it; they are completely transformed.”

As Fong prepares to represent the U.S.A., he acknowledged that the PREP physical therapy team got him to where he needed to be.

“This is going to be my last competition, and I want to give back to USSOCOM, represent [the Navy], and my country,” said Fong who confidently added that he’d love to win a medal.”

No matter where he places, he’s already a winner!