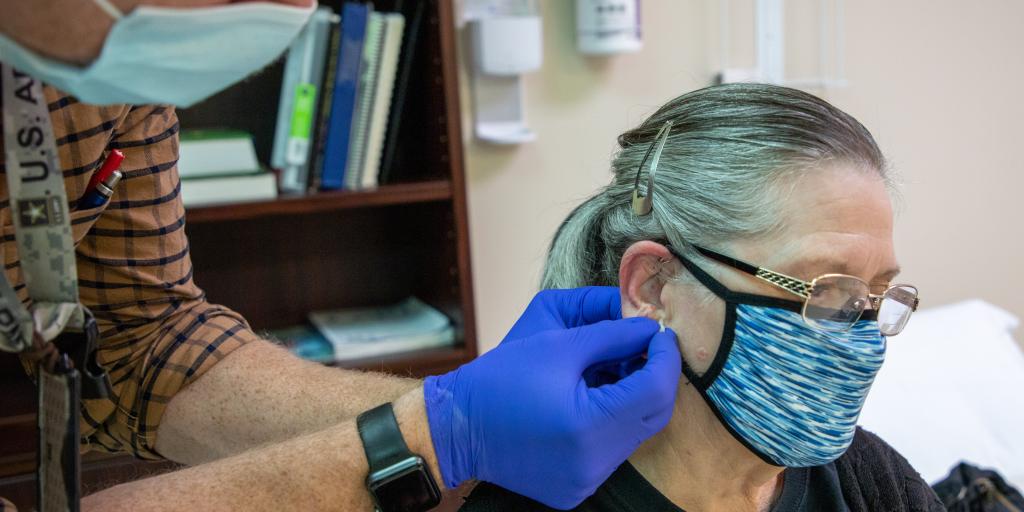 Acupuncture has been around for hundreds of years when the Chinese developed the practice as a method of relieving pain by using small needles inserted through the skin at specific points on the body.

Battlefield Acupuncture (BFA) or Auricular Acupuncture is a specific form that involves temporary needles inserted at 5-points in the ear that relieve a variety of pain.

This form of acupuncture was developed by a retired Air Force colonel as a quick treatment to acute pain on the battlefield so the patients could be treated before going to the hospital and has adapted over the years to benefit Veterans and their chronic pain.

Hollis said the premise with BFA is that these lines of meridian that are traveling through the body all converge like a big clump of spaghetti in the outer part of the ears. The process is performed by placing small needles into the ear, which releases microscopic barbs into the ear. These temporary needles have golden studs which are scattered throughout one or both ears, remaining for three to five days, which allows for continued treatment. The studs fall out on their own.

We’re dealing with endorphins, the body’s natural pain killer, and we’re trying to stimulate the nodes to release those endorphins and it travels along that spaghetti path and it goes everywhere in the body, said Hollis. It’s not targeting one specific area. If the Veteran has knee, back and other chronic pains they will benefit relief to all areas.

Often Veterans will notice other pains may see relief as well, Hollis said he had one patient that had complete numbness in his left leg, and after his first visit he noticed he could feel his foot for the first time in years. Those are unintended consequences that are some of the results of BFA, and I let them know that it has a tendency to fix other things, but we really never know from person to person.

The process takes only a couple minutes to preform, and some will notice a sudden strong reaction instantly while others will see a gradual relief. This process doesn’t work for everyone with some coming through stating they saw no relief or affect at all.

Air Force Veteran Sami Houseman said that due to her bout with sciatica she couldn’t go up and down stairs, but now thanks to BFA she was able to regain the ability to walk up and down stairs and has begun weening off medication. “I had sciatica and rheumatoid arthritis in both knees, but in about 6-months I’ve gotten to the point where I can walk up and down steps now, it’s really helped me out.”