Tech Know-how Gets Kennedy Woman VA Job, Love of VA Keeps Her There 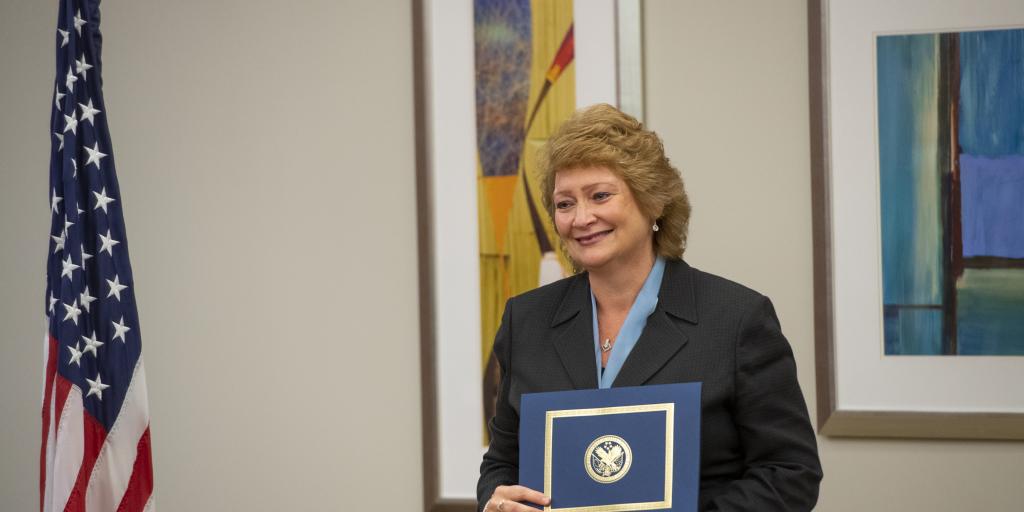 Much has changed since Tauna Perenovich of Kennedy Township started as an entry-level clerk-stenographer at VA Pittsburgh Healthcare System, but recognizing extraordinary federal service – despite a pandemic – hasn’t.

In September, VA Pittsburgh Director Donald Koenig honored Perenovich – now an education specialist – with a 35-year federal service certificate and lapel pin at the Oakland campus. Her family and co-workers couldn’t attend in person, but thanks to state-of-the-art video streaming technology, they shared the moment.

During the virtual ceremony, department leaders highlighted Perenovich’s work ethic and accomplishments as an education specialist, information technology specialist and secretary at VA Pittsburgh and as a VISN 4 Leadership Development Institute coordinator.

“If (only) I had a dime for every time I had to read a STAR award* for her during a meeting,” said learning resource officer David Julian, emphasizing that she is always “helping people that can’t be helped.”

Her longevity may be attributed to her pride in working for VA.

“I remember my meeting with Tauna like it was yesterday…How grateful she was for all the opportunities the VA has given her. And she took those opportunities,” Education Chief Dr. Thomas Grau said of their first face-to-face meeting.

Grau likened Perenovich’s impact on VA health care to a quote attributed to American educator and presidential advisor Booker T. Washington: “There are two ways of exerting one's strength: one is pushing down, the other is pulling up.”

“Tauna embodies the second part of that,” Grau said.

The use of technology to celebrate Perenovich’s 35 years of service is not surprising. She rolled into her VA career as the computing industry was rolling out more and more computers, printers and medical devices. But it was through learning specialized skills at the now-closed Bradford Business School in Pittsburgh that she gained an edge over other applicants.

“I was hired because I was knowledgeable in using the IBM Displaywriter word processor – with the big 8-inch disks – one to run it and one to save files on. The food service chief wanted to convert all the job descriptions and patient menus,” Perenovich said.

VA had three of the systems in 1985 at the now decommissioned Highland Drive campus when she started. Now operating with much more responsibility (and pay), she credits her success not only to knowing how to use the Displaywriter, but also to VA employment perks.

“We had the TAP (tuition assistance program). It was a pot of money that they would distribute depending on the number of people that applied. Sometimes we were lucky to get a hundred dollars,” Perenovich said.

Nevertheless, the funds helped her earn an associate’s degree in business management from the Community College of Allegheny County. She later earned her bachelor’s degree in health services management from Robert Morris University and a master’s in professional leadership from Carlow University with a little VA help, but understanding VA resources remains her strong suit.

“Reading. Knowing. Inquiring. The challenge is knowing who to ask,” Perenovich said, noting human resources and education staff are good sources of knowledge for VA staff.

“Encouraging entry-level staff that they can do what I did if they take advantage of all that is given them – that is so me,” Perenovich said. “Making sure you’re aware of things. I was never really shy about asking about things.”

Her sound career advice reflects Perenovich’s willingness to take advice from one of her mother’s friends while she was still at Bradford.

“Her friend started at entry level and became the supervisor of the Social Security office in Pittsburgh. She retired at 55 with a buyout. She told me that I could make a great federal career. I just needed to get my foot in the door,” Perenovich said. “She was absolutely right!”

Perenovich has taught hundreds of co-workers in the technology, leadership and public speaking skills needed to do their jobs. She has also filled her resume with extracurricular activities over the past 20 years, including volunteering with the VA Pittsburgh Federal Employees Credit Union, serving in leadership positions.

Though she most often educates VA staff, she is proud of her entry-level computer classes for Veterans in VA Pittsburgh’s domiciliary.

“More than 300 Veterans have participated. It’s usually the older Veterans – 45 and up – that need assistance. It’s really important, especially in finding a job, because everything is done on computers now,” Perenovich said. “At some point you’re going to have to sit down at a keyboard.”

Reflecting on 35 years of helping Veterans and co-workers and the celebration in September, she realized something.

“I like Dr. Grau’s reference of ‘pulling people up’ and his quote,” Perenovich said. “I get great satisfaction from giving back to people, nurturing and encouraging.”

*Special Thanks and Recognition (STAR) Award recipients are nominated by anyone who witnesses a staff member going above and beyond their normal duties.

Visit our Work With Us page if you’re interested in employment, volunteer and health care training opportunities at VA Pittsburgh Healthcare System.