We provide inpatient and outpatient services for chronic diseases and disorders that affect your brain, spine and the nerves that connect them.

As a VA Epilepsy Center of Excellence we provide comprehensive epilepsy evaluation and care for Veterans with seizure disorders.

Our mission is to improve your  health and well-being through the integration of clinical care, outreach, research and education.

Preparing for your epilepsy clinic appointment

Minneapolis VA is 1 of 17 sites that provide comprehensive epilepsy evaluation and care for Veterans with seizure disorders.

"Epilepsy is a brain disorder that causes people to have recurring seizures. The seizures happen when clusters of nerve cells, or neurons, in the brain send out the wrong signals. People may have strange sensations and emotions or behave strangely. They may have violent muscle spasms or lose consciousness.

Epilepsy has many possible causes, including illness, brain injury, and abnormal brain development. In many cases, the cause is unknown." From the National Library of Medicine - Epilepsy

"Seizures happen because of sudden, abnormal electrical activity in the brain. When people think of seizures, they often think of convulsions in which a person's body shakes rapidly and uncontrollably. Not all seizures cause convulsions. There are many types of seizures and some have mild symptoms." From the National Library of Medicine - Seizures

Learn more about the different types of seizures

The onset of a seizure is not known.

As more information is learned it may be reclassified as a focal or generalized seizure.

Seizures affect both sides of the brain at the same time.

All generalized seizures affect a person’s awareness or consciousness in some way. These used to be called tonic-clonic, absence, grand-mal, etc.

Focal seizures start in one area or in one side of the brain.

The Anita Kaufmann Foundation's mission is to educate the public not to fear epilepsy or brain trauma.

The Cure Epilepsy mission is to find a cure for epilepsy, by promoting and funding patient-focused research.

For more than 50 years, the Epilepsy Foundation has shone a light on epilepsy by promoting awareness and understanding, advocating for laws that matter to people with epilepsy, and funding epilepsy research.

The Epilepsy Foundation of Minnesota offers services for people with epilepsy and seizures across Minnesota and eastern North Dakota.

Epilepsy in the Workplace and the ADA - U.S. Equal Employment Opportunity Commission

This document provides information on how the ADA may apply to job applicants and employees who have or had epilepsy, including questions that may be asked, accommodations that may be needed, safety concerns, and harassment.

It is important to know the driving laws for your state.

A seizure results from a sudden rush of abnormal electrical signals in the brain. Symptoms may range from a minor daze to uncontrollable muscle spasms (convulsions). In many cases, the person will faint (lose consciousness). A seizure can be caused by a high fever, head injury, medicine reaction, or condition such as epilepsy.

Seizures are rarely predictable and many people may not know what exactly causes their seizure on a given day, but they may suspect certain things increase the likelihood of seizures. The most common trigger for a seizure is missing a dose of medication. Epilepsy medications work best when there is a steady level of medicine in your blood.

From the VA Epilepsy Self-Management Guide

We provide compassionate care for Veterans with Parkinson’s disease and other movement disorders – such as Parkinson’s plus disorders, essential tremor and dystonia – so that you may live your most fulfilling life. This program includes medical, surgical and rehabilitation services.

The neurology and rehabilitation medicine departments use a shared care model for Veterans with a movement disorder. We use a lifelong care model and continue to follow you throughout the disease process.

What is Parkinson's disease?

"Parkinson's disease (PD) is a type of movement disorder. It happens when nerve cells in the brain don't produce enough of a brain chemical called dopamine."

What are movement disorders?

"Movement disorders are neurologic conditions that cause problems with movement, such as:

Why should people with Parkinson’s disease exercise? Data from the Parkinson’s Foundation Parkinson’s Outcomes Project, the largest-ever clinical study of Parkinson’s, suggests that people with PD that complete at least 2.5 hours of exercise every week have a better quality of life.

The Minneapolis VA Caregiver Program hosts a virtual group for caregivers of Veterans with Parkinson’s disease. Pre-registration is required and group is limited to 15 participants. To register, call Jessica Peterson, LICSW, at 612-243-7922.

The Parkinson's Foundation makes life better for people with Parkinson’s disease by improving care and advancing research toward a cure.

Evidence-based speech, physical and occupational therapies for Parkinson's, pediatrics, and other populations.

Mission: To preserve the speech and communication of individuals with Parkinson’s and related neurological disorders through continuous speech therapy, follow-up support, research, education, and community awareness.

Minneapolis VA Medical Center is a VA-recognized Primary Stroke Center. We offer stroke services such as time-sensitive clot busting medication to help reverse strokes and we partner with other hospitals to provide you with advanced endovascular treatments. We also offer extensive rehabilitation services.

If you think that you or someone else is having a stroke, call 911 right away. Immediate treatment may save someone's life and increase the chances for successful rehabilitation and recovery.

What is a stroke?

"A stroke occurs when either too much blood or too little blood disrupts blood flow to part of the brain. This deprives brain tissue of necessary oxygen and nutrients. Within minutes brain cells begin to die and the result is a loss of brain function. Brain damage from strokes can be minimized if they're treated promptly, but it's common to mistake signs of a stroke for other health problems, which delays treatment." From My HealtheVet - Stroke Awareness: Get the Facts

What are the types of stroke?

From My HealtheVet - Stroke Awareness: Get the Facts

Signs of a stroke 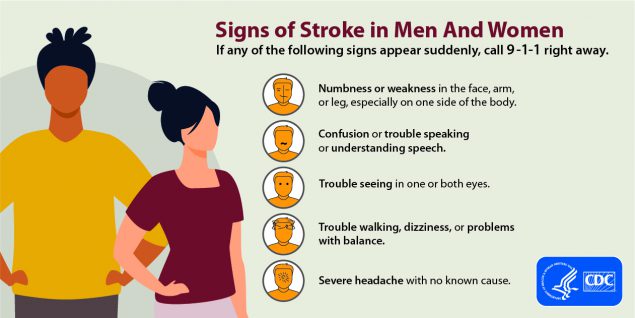 Keep your stroke risks low with regular checkups and treatment for these conditions if you have them:

Up to 80 percent of second clot-related strokes may be preventable.

Learn and share the F.A.S.T. warning signs of a stroke.

Recognize the Signs and Symptoms of Stroke - CDC.gov

When someone is having a stroke, every minute counts. (Video)