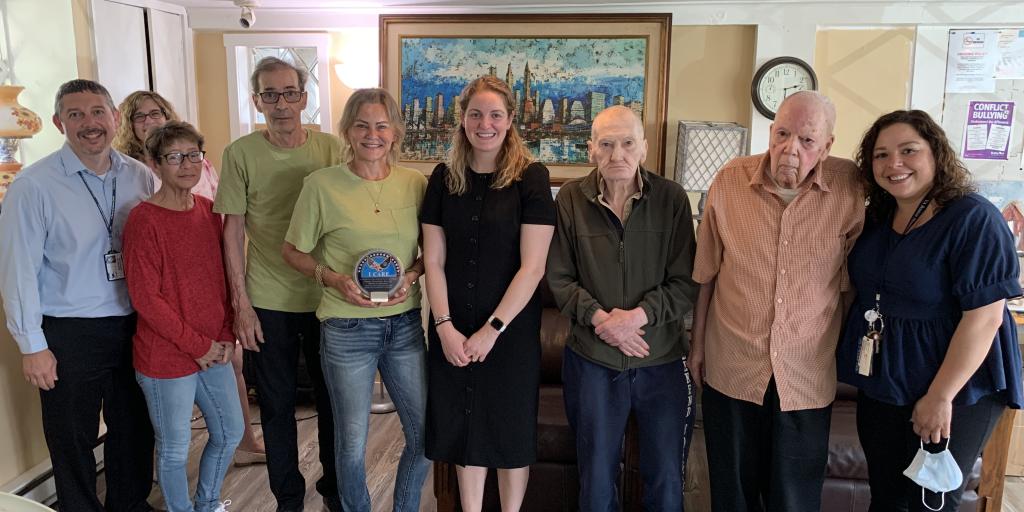 In the early morning hours of Feb. 22, 2022, a fire broke out at the Acorn Hill Home in Middleboro, Mass., because of an unattended candle in a bedroom.

Staff quickly awoke and sprang into action, ensuring the Veterans, and the other residents, were evacuated safely. Everyone made it out, although one needed emergency hospital care.

The results could have been far worse if it wasn’t for Massachusetts State Trooper John Hagerty, who used a ladder from the property to rescue a resident who had been trapped by flames on the second floor.

Damage from the fire was so bad that the insurance company quickly deemed the structure to be a total loss. All thirteen residents, seven of whom are Veterans, lost their home.

The home has been a long-standing VA Community Residential Care partner, which VA often refers to as CRCs. The CRC program is a VA-subsidized initiative designed for Veterans who do not need acute hospital care, but cannot live alone because of medical or mental health needs.

About two years ago, Margret Gudmundsson purchased the property after she had seen it on her commute to her coffee shop, Café Milano, which she still owns and operates. She was initially unfamiliar with the CRC program, but quickly found that getting to know the Veterans and seeing their smiles has been the best part of working with them.

“We get to know the details about them, what they like for fun and what food they like,” Gudmundsson said. It wasn’t long before she hosted bingo nights for the Veterans and made daily runs to the local Dunkin’ with them.

The Veterans appreciated the camaraderie, as well.

“I enjoy the friendship that I have with other Veterans,” explained Navy Veteran William Kenney, who lives in the home and served in South Korea in the late 1960s.

After the fire was controlled, Gudmundsson and manager Sheila Offley immediately began working to ensure the displaced Veterans would have hotel rooms, and eventually trailers at the home, so that they would have a place to stay.

Despite losing many of their own possessions in the fire, as well as several pets, Gudmundsson and her staff placed the needs of the residents above their own.

“There was still soot on their hands when they were helping the Veterans,” said Jason McCall, a social worker who works for VA Boston’s CRC Program.

In the hours and days that followed, Gudmundsson and her team worked with VA staff, the American Red Cross, and local Veteran service officers to get the residents the medical supplies, clothes and food they desperately needed. On March 9, just over two weeks after the horrendous fire, the Veterans returned to their home, featuring freshly painted walls and ceilings, as well as brand-new furniture.

“Throughout our entire time working with Margret, there has been a spirit of partnership with them, and the recovery from the fire was no different,” said McCall.

On Monday, May 23, 2022, staff from the VA Boston Healthcare System, including Elena Buckley, assistant director for the Brockton VA campus, McCall, and Grishelda Hogan and Susan Morales from the CRC Program, presented Gudmundsson and the Acorn Hill Home with a VA ICARE Award, which is given to those who exhibit VA’s core values of Integrity, Commitment, Advocacy, Respect and Excellence.

“I think Margret and Acorn Hill showed every ICARE value in their response to this fire. Their resilience over the past few months has been extraordinary,” said Buckley.