Blind Veteran swings away thanks to PGA program 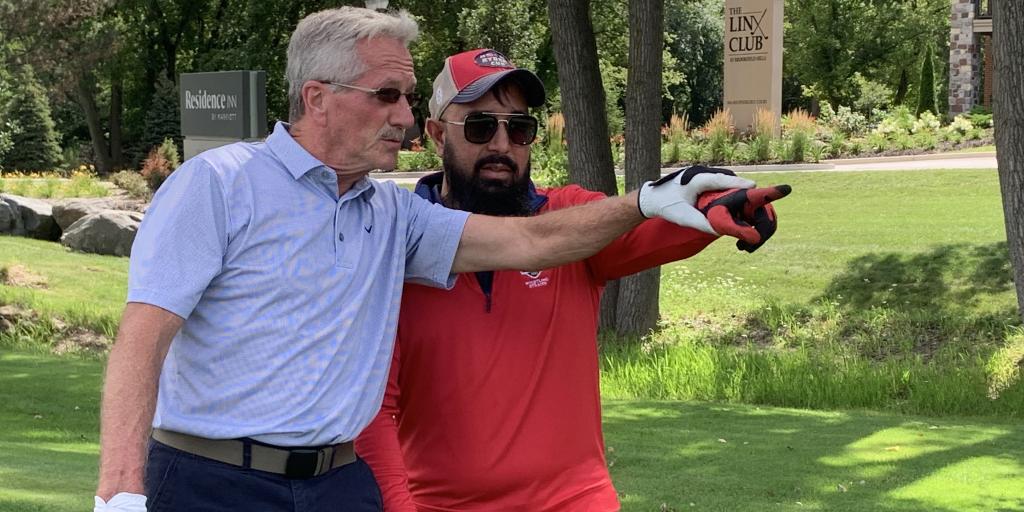 A.J. Mohammed didn’t see his tee shot whistle down the fairway and fade a little to the right Saturday on the first hole at Brookfield Hills Golf Course.

But he didn’t have to see it to know it was a good shot.

He knew that from the distinctive ping of the driver head hitting the ball – and the vocal reactions of his fellow golfers.

But blindness hasn’t stopped the U.S. Navy Veteran from enjoying the game, which is as much about the banter with your fellow players as it is about birdies (rare) and bogeys (innumerable).

“What makes anybody want to take up golf? Because I’m a masochist,” A.J. joked before Saturday’s round.

His fellow duffers chortled in agreement.

They’re all Veterans, brought together as part of the PGA HOPE (Helping Our Patriots Everywhere) program, which pairs PGA professionals with Vets to teach them the game and to foster an atmosphere of camaraderie.

For A.J., golf is another extension of his dive into adaptive sports. He’s also a kayaker and cyclist, and he’s been part of a dog sled team.

“Adaptive sports got me out of my hole – to not let my disability define me,” he said. “I’m able to participate in life and find a new mission through physical fitness and sports. And it has just snowballed from there.”

He lost his sight during an ambush while serving with a U.S. Navy security detail in Iraq 2004. He is completely blind in his right eye and has some light perception in his left eye. He described it as a sighted person navigating life with eyes closed.

On the links, A.J.’s compatriots give him the right club and physically point him in the direction of the shot. They line up the club face with the ball and tell him how hard to hit it. From there, A.J. swings away.

And his swings are the envy of many a golfer. He recently recorded a 44 for nine holes at Paganica Golf Course in Oconomowoc and sank a 33-foot putt.

“He’s actually helped me better teach people who can see,” said Rob Elliott, the PGA professional working with the group of about 10 Veterans who are part of the PGA HOPE program in Brookfield. “He’s hit some great shots.”

“I like the independence of golf. I’m in control,” A.J. said, comparing it to kayaking.

He said he knows when a shot is good or bad. “I can feel it, and I hear everyone else’s reaction,” he said. “And when you hear that word ‘Fore!’ you know it’s bad.”

While PGA HOPE is targeted to Veterans with disabilities, it is open to all Veterans. Elliott started with the program last year and has nothing but praise for it.

“After last year I said, ‘I will never have a year that I won’t do this,’” he said. “I appreciate what these Veterans have gone through. I’m happy to do it and enjoy it.”

It’s a six-week program and includes Veterans of all abilities. Lessons are taught at Storm’s Golf Range in Brookfield, and the concluding event is a round of nine holes at Brookfield Hills.

Elliott hopes to grow the program to 24 golfers next year.

And the benefits aren’t just physical.

“It helps to let go, to talk with people and have that sense of belonging,” said John Harvey, an Air Force Veteran of Vietnam who started with the program last year and is now an ambassador. “Everyone knows what each other has been through.”

“It gets them out of the house – and possibly out of a dark place,” he said. “This is a chance for me to give back to some guys who put their lives on the line. And I’ll continue to do it.”

Veterans interested in taking part in Elliott’s PGA HOPE Brookfield group next year can email him at rob@robelliottgolf.com or call 262-370-3304.