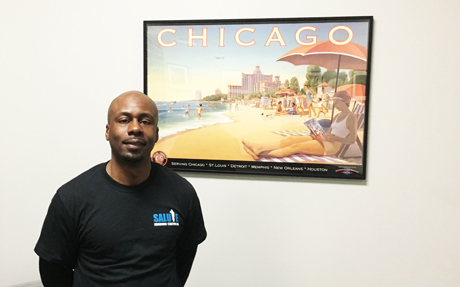 The data-center field requires a steady stream of recruits to fill open positions. Veterans of all stripes, including those exiting homelessness, possess great potential for these high-demand jobs. The challenge is in connecting the two.

“We formed Salute to reduce the high Veteran unemployment rate and prepare for the anticipated 20 percent shortage of qualified personnel for our industry,” said Kirby. “Many Veterans already possess the core skills to fill these roles and just need hands-on experience.”

Salute’s program is structured to accommodate Veterans with and without experience in the data-center industry. Salute hires Veterans for project-based work in data-center cleaning, battery maintenance and technical installations. On-the-job training gives them the fundamentals to start or advance in a career in the industry. Entry-level data-center positions typically start at $50,000 per year.

“We train veterans across each business unit so they gain the one year of mission-critical experience typically needed to launch careers in the data industry,” said Okroy, Salute’s chief executive officer. Once hired, Veterans join teams that service data centers around the country.

Ms. Smith-Redd reviewed her case files, and found a potential candidate in Henry L. Jackson Jr. Mr. Jackson possessed "great leadership skills," she said, and his vocational assessment showed that his skills and career goals matched up with Salute's.

"The job was exactly what I wanted to do," Mr. Jackson said. "It was a godsend."

Yet he faced some barriers. Although his homelessness was resolved about a year prior, he'd fallen behind in his utility payments. Mr. Jackson sought immediate employment-and a paycheck to keep the lights on.

After a positive interview process, Salute hired Mr. Jackson, starting him at a few hours per week. To gradually reintroduce him into the workforce, the company agreed to initially pay him on a per-day basis so he could get a handle on his bills.

"That first week of work, he was able to bring his utilities up to date," said Smith-Redd. "This took a lot of stress and pressure off so he could focus on his work performance."

The Veteran’s employment has been a success. VA and Salute both agree this is due to Mr. Jackson’s preparation, commitment, skills and dedication to a job well done.

"Henry was enthusiastic from our first conversation," said Sonda Kolodzinski, Salute's director of operations. "He did everything he said he would, from minute one."

The feeling is mutual. "My supervisors laid out the blueprint of the job and their expectations of me, and they made it clear what I had to do," said Mr. Jackson.

Steady progress led to a boost in Mr. Jackson's hours to full time. "Henry is a shining example of Salute's mission in action," said Stephen Richardson, building representative for the facility where Mr. Jackson works. "As a Veteran myself, supporting Henry and watching him grow is gratifying on so many levels."

Beyond Mr. Jackson's outstanding work ethic, Salute's flexibility in payroll practices was a big help. Mr. Jackson used his daily salary to catch up on bills and secure transportation to and from work, overcoming a common roadblock to successful employment of Veterans exiting homelessness.

"Steady performance reports were essential, too," said Smith-Redd. "I receive regular progress updates from Mr. Jackson's Salute supervisors about his performance on the job," she said. "Supervisors and co-workers are also building one-on-one relationships with him so he feels part of the team."

"When companies do this, it engages employees that much quicker, which increases retention and sustains their employment," said Smith-Redd. "This is probably the most effective and cost-efficient way to onboard a new employee, particularly one who's experienced homelessness and/or chronic unemployment."

Mr. Jackson advises other Veterans looking for work to find their niche, and pursue it. "Salute is helping me live the life I want to live," he said.

Back to Success Stories Home »

Veterans who are homeless or at risk of homelessness can call or visit their local VA Medical Center (VAMC) and ask for a Homeless Coordinator. Use the VA locator tool www.va.gov/directory to find your nearest VAMC and call or visit today.