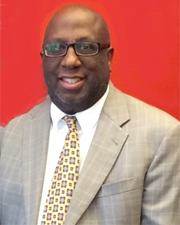 As an AMC Career Intern Program Graduate, Eldred is an advocate for mentoring and developing junior contract specialists.  He has been a member of the Services Acquisition and Management Services Center Industry Government Councils.  Eldred has received numerous awards for his vast procurement knowledge and expertise including The Attorney General’s Award for New Employees, The Government Executive Magazine Travel Manager of the Year Award, and two Meritorious Honor Awards for Outstanding service at the Department of State.

Eldred is a native of Baton Rouge, Louisiana, where he is a graduate of Southern University, and where he was initiated as a member of Kappa Alpha Psi Fraternity, Incorporated.  Eldred recently earned his Master of Science in Organizational Performance from Bellevue University, Bellevue, NB.  He is active in various community activities, both here and in Louisiana.