Evolution of a Multiple Sclerosis Lesion

MS is a neurological disease that affects the brain and spinal cord and can affect the optic nerves. The disease damages myelin, which is the protective material covering the nerves in the brain and spinal cord. This damage produces changes in how the muscles respond to nerve stimulation by interfering with body movement and coordination. The damaged areas develop a scarring or sclerosis (called plaques), that continues to inhibit normal functioning. The areas of disease activity in brain tissue where myelin has been stripped from nerve fibers are also called lesions. The disease activity and symptoms vary widely among people with MS in part due to the type and location of these lesions. In some cases, the scarring heals and people experience more normal functioning for a time. However, over time the continual scarring can cause permanent damage to the motor and sensory areas of the brain and spinal cord.

The cartoon below represents the mechanism of how a new MS plaque or lesion develops. 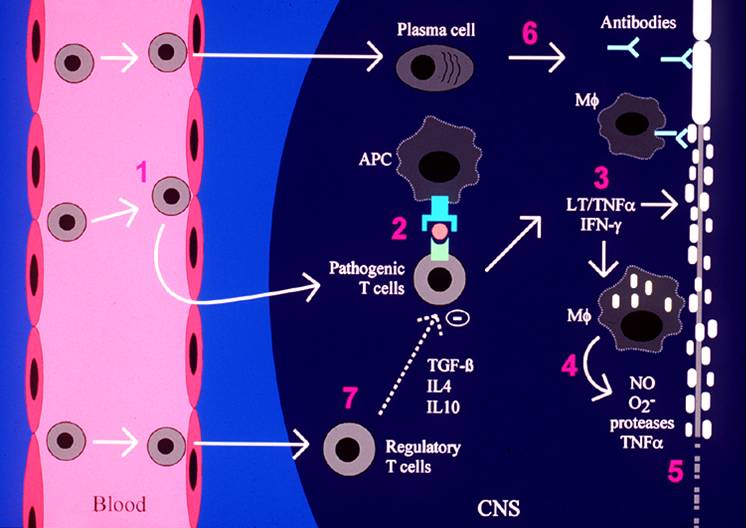 Specialized white blood cells, called T cells move from the blood into the brain or spinal cord (1). These are the disease causing T cells. They go into the brain and spinal cord, also known as the central nervous system (CNS), and “attack” their “target” (2).