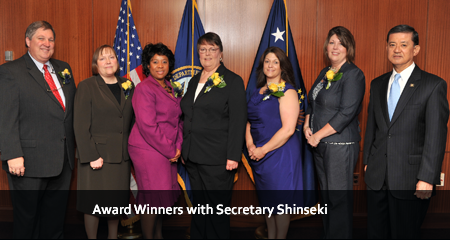 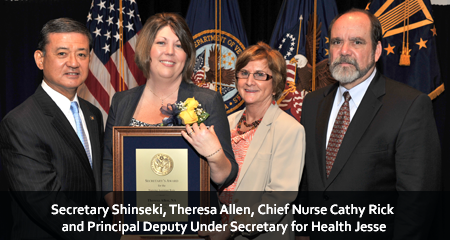 Prior to her appointment as Telehealth Technician, Theresa served as a Health Care Technician at the Erie VAMC from Aug 2006 – Aug 2010.

"The implementation of Telehealth within the VA is not only a futuristic way of caring for our Veterans, but it is a fantastic reality that I’m proud to be part of,” says Allen. “Watching our Veterans graciously embrace the ever changing world of Telehealth and the possibilities these programs hold is what drives me to always strive to do better. It’s a privilege and honor to serve our Nation’s heroes." 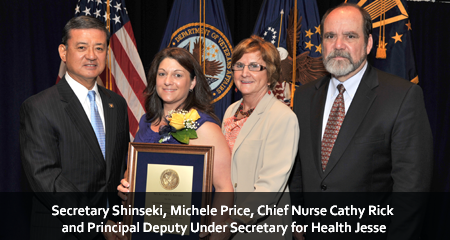 Michele began her health care career as a volunteer at the hospital in Paxton, Illinois while in Jr High. In the summer she turned 16, Michele became certified as a nursing assistant and worked as a CNA throughout high school. After high school, she worked at Carle Hospital for 6 years as an Emergency Department Technician and went to nursing school during that time. Michele graduated from Parkland Community College, Champaign Illinois in 1994. Prior to coming to the VA, Michele worked as an LPN in occupational medicine, school nursing and was a care plan coordinator for Medicare.

Michele joined the VA six years ago as an LPN in the float pool. In 2007, she transferred to Ambulatory Care. She currently serves as the LPN for the OIF/OEF/OND team. This team provides primary care for Combat Veterans returning from Iraq and Afghanistan. Michele is a member of the Polytrauma and Seamless transition teams. She is also the LPN for the POW clinic and assists specialty providers that come to that clinic to do second level TBI and environmental exams. She is a member of the nursing protocol work group, the DEMPS team and is a Master Preceptor for the Teledermatology program. Throughout the last year and a half, Michele also traveled with the pilot team for PACT.

When asked about the best part of her job, Michele will tell you, "My patients, of course !" "I also love the team that I work with and the fact that everyone is extremely dedicated to putting our patients first and providing care to them with honor, respect and compassion." 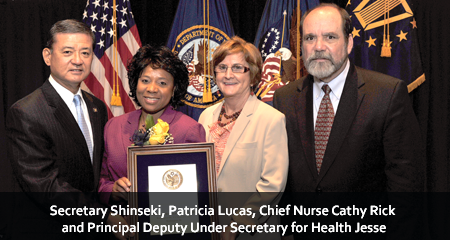 Patricia A. Toles Lucas is the Suicide Prevention Coordinator at the Washington DC Veteran Affairs Medical Center and has held that position since October 2007. Patricia is a veteran and served in the United States Air Force for 20 years. She retired in September 2007 as a Lieutenant Colonel. Patricia received a Bachelor of Science degree in Nursing from Troy State University in 1984 and received her Master of Science degree in Human Relations from the University of Oklahoma in 1997. After working as a nurse at a community hospital for 4 years, she joined the Air Force in 1986. In 1991, she decided to specialize in Mental Health Nursing. Patricia held multiple positions in the Air Force, such as medical, surgical, and psychiatric staff nurse, Mental Health Day Treatment Program Coordinator, Mental Health Clinic Nurse Manager and Case Manager, Surgical Department Operations Officer, Deputy Commander of Mental Health, Chief of the Health and Wellness Center, and Chief of Medically Related Services. 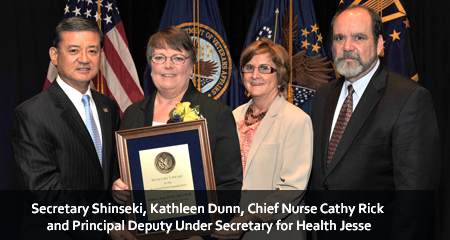 Kathleen Dunn joined the VA San Diego Healthcare System (VASDHS) in 1989 in order to help open the Spinal Cord Injury/Disorders (SCI/D) Center. She has served as the clinical nurse specialist and rehabilitation case manager for the SCI/D Center since that time. Previously she worked as a clinical nurse specialist and staff nurse in a private sector rehabilitation center in the San Diego area.

Ms. Dunn provides education and clinical consultation for nurses, other team members, Veterans and family members at the SCI/D Center. She leads their interdisciplinary Skin Rounds program, and is an expert in pressure reducing mattresses and beds use for the VASDHS. She spearheaded the VASDHS Safe Patient Handling and Movement program, resulting in a Best Practices Award in 2004. She precepts CNS students from two universities, and coordinates student nurse rotations on the SCI/D unit. She lectures on a regular basis at several local universities, and has published both journal articles and textbook chapters. She has a special interest in sexuality and fertility counseling and education for Veterans with SCI/D and their partners, and provides these services for both inpatients and outpatients.

In 2008, Ms. Dunn was the first nurse inducted into the Spinal Cord Injury Hall of Fame. She received the ARN Advanced Practice Award in 2008, and the National Association of Clinical Specialists CNS of the Year Award in 2003. She is active in the Association of Rehabilitation Nurses, the Academy of Spinal Cord Injury Professionals, the National Association of Clinical Nurse Specialists, the American Spinal Injury Association, and Sigma Theta Tau International. She serves as the ARN representative on the Steering Committee for the Consortium for Spinal Cord Medicine. In her free time, she serves as a moderator for the CareCure website discussion forums for people living with SCI/D. 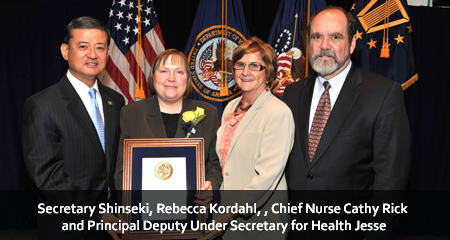 Ms. Kordahl has been instrumental in raising the level of care, safety, access, satisfaction and performance improvement that has resulted in Madison achieving Magnet recognition in 2010. Ms. Kordahl is an active youth mentor in Madison. She has assumed leadership positions in numerous professional and civic organizations throughout her career. 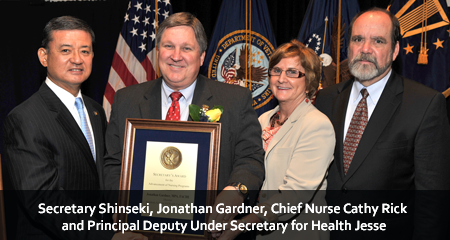 Jonathan H. Gardner, MPA, FACHE, was appointed Director and Chief Executive Officer of the Southern Arizona VA Health Care System (SAVAHCS) on July 10, 1994. He has served as an executive at all levels within the Department of Veterans Affairs, Veterans Health Administration (VHA) (i.e. VA Central Office, Network and facility). As Director, his duties include the overall organization and operation ($400m operating budget, 2220 FTE, $4.9m Research Budget) of a highly affiliated 283-bed, tertiary-care teaching medical center and multiple community-based clinics throughout Southern Arizona. SAVAHCS is the principle teaching affiliate with the University of Arizona Colleges of Medicine, Nursing, and Pharmacy, as well as 80 other institutions of higher learning.

Mr. Gardner currently serves as Chairman, VHA Graduate Health Administration Training Program (GHATP); Chairman, Southwest Health Care Network 18 Resources and Business Board; and Steering Committee Chairman of the VHA Western States Network Consortium (VISNs 17,18, 19, 20, 21, 22). He also serves as a member of the Strategic Directions Committee of the VHA National Leadership Board and as a member of the Board of Directors, National Association of Veterans’ Research and Education Foundations (NAVREF).

In 1991, Mr. Gardner was appointed as Director, Field Support, Southern Region, Washington DC (1991-1994). Mr. Gardner also served as acting Deputy AsCMD for Operations. Mr. Gardner was the Acting Director and Associate Medical Center Director at VAMC Dallas from 1988-1991. Prior to that Mr. Gardner served in progressively responsible assignments within the Veterans Health Administration.

Mr. Gardner is Board Certified in Healthcare Management and a Fellow of the American College of Healthcare Executives (ACHE). He was elected by his peers as Veterans Affairs Regent (2007-2010) representing 1306 member executives. He received a Bachelor of Arts degree in 1978 and a Masters of Public Administration in 1980 (Dean’s List) from the Marriott Graduate School of Management at Brigham Young University. Mr. Gardner is active in professional and community organizations through service as President of the Southern Arizona Federal Executive Association; Past member, Board of Directors Catalina Council, Boy Scouts of America; and Troop 716 Committee Chairman. Mr. Gardner also serves as Co-Chairman of the United Way Southern Arizona Combined Federal Campaign.

In 2000 and 2007, Mr. Gardner received the prestigious Presidential Rank Award for Meritorious Executive Service. Mr. Gardner received the VHA Systems Redesign Award-Executive Champion 1st Place-2010 and 2nd Place-2011. In 2007, Mr. Gardner was honored by the American College of Healthcare Executives with the Federal Excellence in Healthcare Leadership Award and the Distinguished Service Award in 2010. He is also the recipient of the 2006 Distinguished Alumnus Award from the Brigham Young University George W. Romney Institute of Public Management. He was selected twice nationally from among VA, Air Force, Army, Navy and Public Health Service executives by the Association of Military Surgeons of the United States (AMSUS) for the Outstanding Federal Healthcare Executive Award (2000) and the Ray E. Brown Award (1997). Mr. Gardner is also the 1991 recipient of the prestigious 44th Annual Arthur S. Flemming Award which honors outstanding federal employees under the age of 40. In 1988, he was the first VA employee to receive the William A. Jump Memorial Foundation Meritorious Award for exemplary service in public administration. In addition to multiple VA awards, Mr. Gardner has twice been the recipient of the Distinguished Government Service Award bestowed by the Texas (1988) and Utah (1984) Federal Executive Boards.