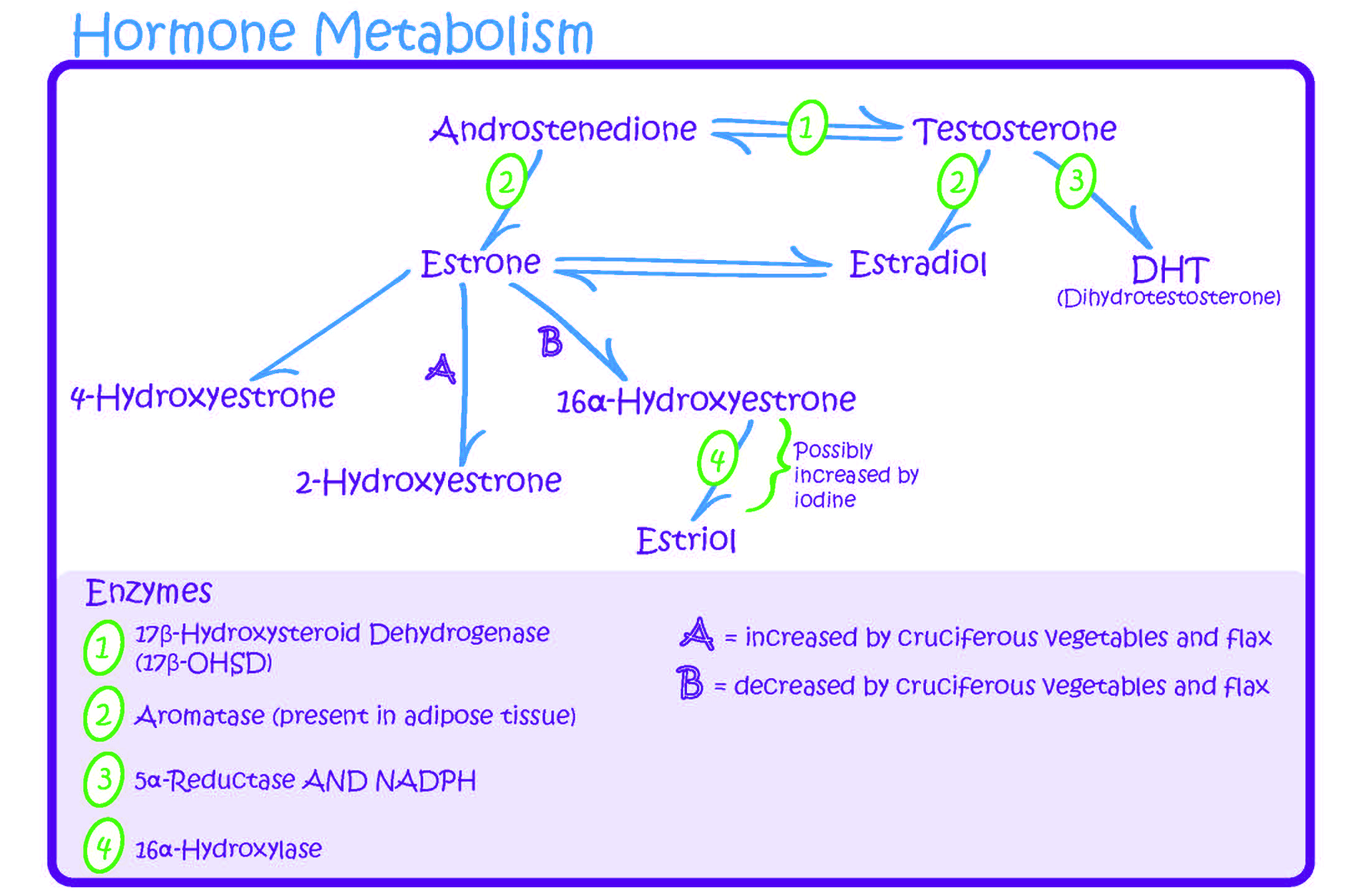 For these reasons, a healthy estrogen balance favoring production of 2-hydroxyestrone is important for womens health. Although lab testing can determine a womens estrogen ratio, testing is likely unnecessary for most women. Women with an increased risk of estrogen-sensitive conditions and who have behaviors that promote estrogen dominance should be counseled in healthy lifestyle changes. The following have been shown to shift estrogen metabolism toward the 2-hydroxyestrone pathway[2]:

A healthy lifestyle that allows for a normal weight helps to decrease the risk of insulin resistance from metabolic syndrome. Insulin resistance results in increased estrogen levelsboth by increasing aromatase activity, resulting in the conversion of testosterone into estrogen, and by decreasing sex-hormone-binding globulin, resulting in greater amounts of free circulating estrogen.[2] Insulin resistance also causes increased production of inflammatory mediators, which likely contributes to estrogen-sensitive conditions including fibroids. For these reasons, regular exercise and anti-inflammatory supplements are often used in treatment of estrogen-dominant conditions.

Lifestyle habits also influence estrogen excretion. Women eating a vegetarian diet have a three-fold increase in fecal estrogen excretion and have lower serum estrogen levels by 15%-20%.[3] Intestinal dysbiosis, or an imbalance of the gut microflora, may also contribute to estrogen dominance. Overgrowth of certain gut bacteria increases levels of the enzyme beta-glucuronidase, which cleaves estrogen from glucuronic acid, preventing its excretion and allowing for reabsorption.[2] Diet and gut microflora influence estrogen absorption and its enterohepatic recirculation. Therefore, clinicians should address intestinal health when considering conditions of estrogen dominance. For more information, refer to Promoting a Healthy Microbiome with Food and Probiotics.

In summary, the following healthy lifestyles should be encouraged to support a positive estrogen balance in women at risk or with diagnoses of estrogen-sensitive conditions.

1. Engage in moderate exercise daily to maintain a healthy weight.

5. Eat a diet high in whole soy foods which help to shift estrogen metabolism toward increased levels of 2-hydroyestrone. For more information, refer to the Phytoestrogens Whole Health tool, as well as the food and drink section of the Cancer Care Whole Health overview.

Note: Please refer to the Passport to Whole Health, Chapter 15, Complementary Integrative Health: Dietary Supplements for more information about how to determine whether or not a specific supplement is appropriate for a given individual. Supplements are not regulated with the same degree of oversight as medications, and it is important that clinicians keep this in mind. Products vary greatly in terms of accuracy of labeling, presence of adulterants, and the legitimacy of claims made by the manufacturer.

7. Avoid xenoestrogens, or environmental compounds that imitate estrogen in the body. Examples include PCBs (polychlorinated biphenyls), BPA (bisphenol A), and phthalates.

8. Promote a healthy intestinal microbiome, addressing possible food intolerances and supplementing with probiotics if necessary. Refer to the Whole Health tool Promoting a Healthy Microbiome with Food and Probiotics.