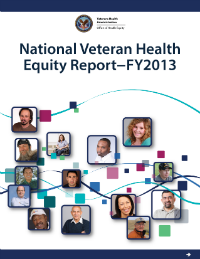 The National Veteran Health Equity Report details patterns and provides comparative rates of health conditions for vulnerable Veteran groups. Specifically, this report is designed to provide basic comparative information on the sociodemographics, utilization patterns and rates of diagnosed health conditions among the groups over which the VHA Office of Health Equity (OHE) has responsibility with respect to monitoring, evaluating and acting on identified disparities in access, use, care, quality and outcomes. The report allows the VA, Veterans, and stakeholders to monitor the care vulnerable Veterans receive and set goals for improving their care. 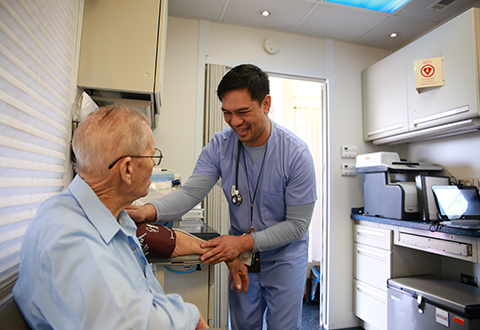 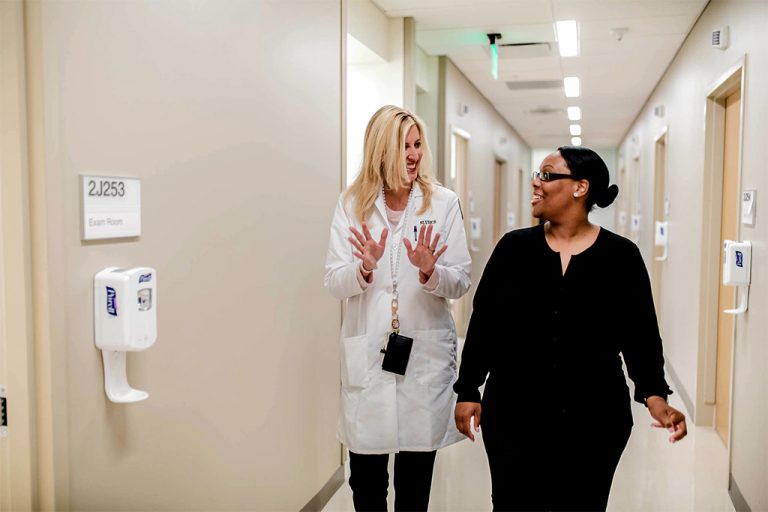 This Information Brief highlights research by Dr. Donna Washington and her colleagues at the Health Equity-QUERI National Partnered Evaluation Center on rates of heart disease in African American Women Veterans. The Information Brief also highlights videos of Veterans discussing their experiences with high blood pressure offering tips on taking medications, talking to health care providers, and making other healthy behavior changes and the long-standing national partnership between VA and the American Heart Association to bring awareness and knowledge about heart disease and stroke. 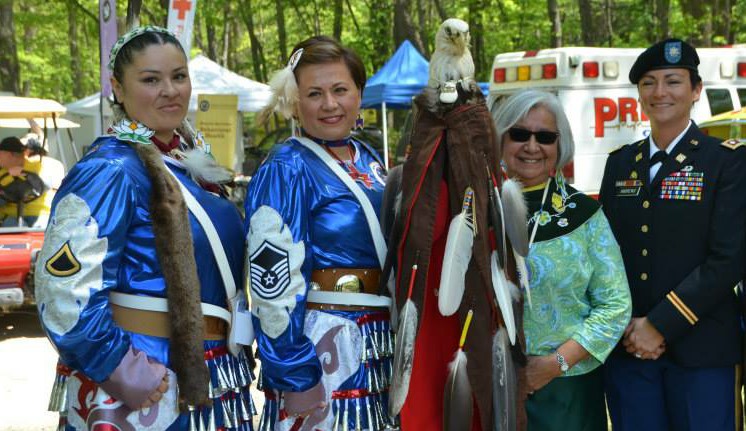 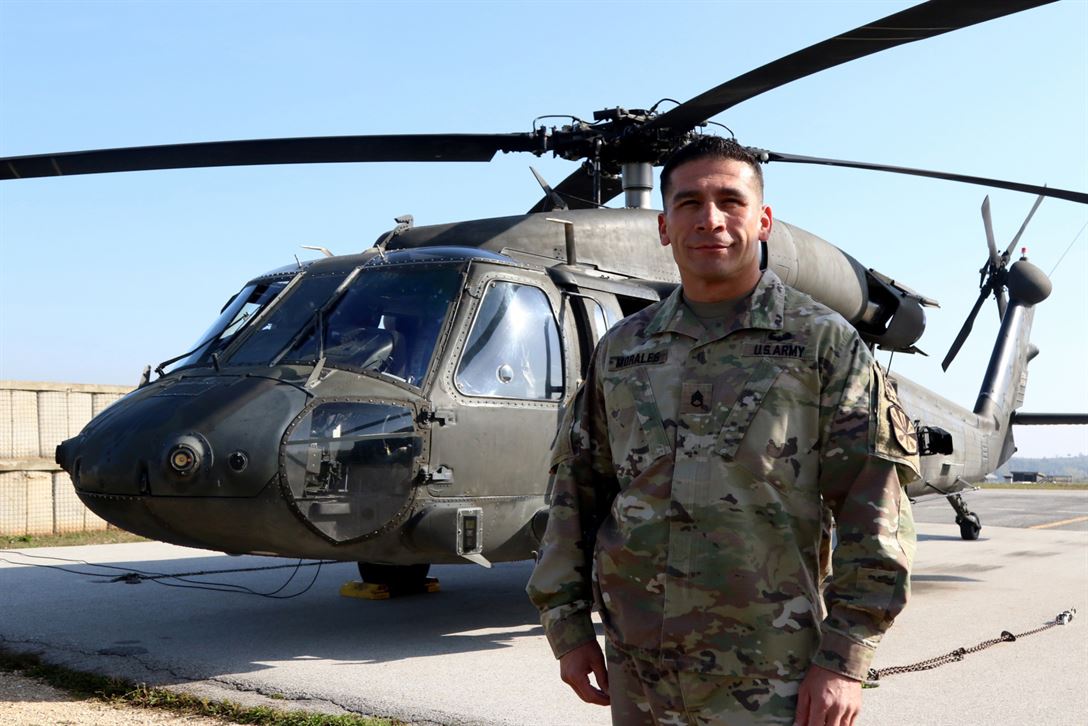 This Information Brief highlights research by Dr. Donna Washington and her colleagues at the Health Equity-QUERI National Partnered Evaluation Center on rates of diabetes amongst Hispanic Veterans. The Information Brief also highlights the OHE-supported project with VA Heart of Texas Health Care Network (VISN 17) that developed and delivered a culturally sensitive MOVE! curriculum aimed to address the specific needs of Hispanic Veterans with diabetes in Texas. 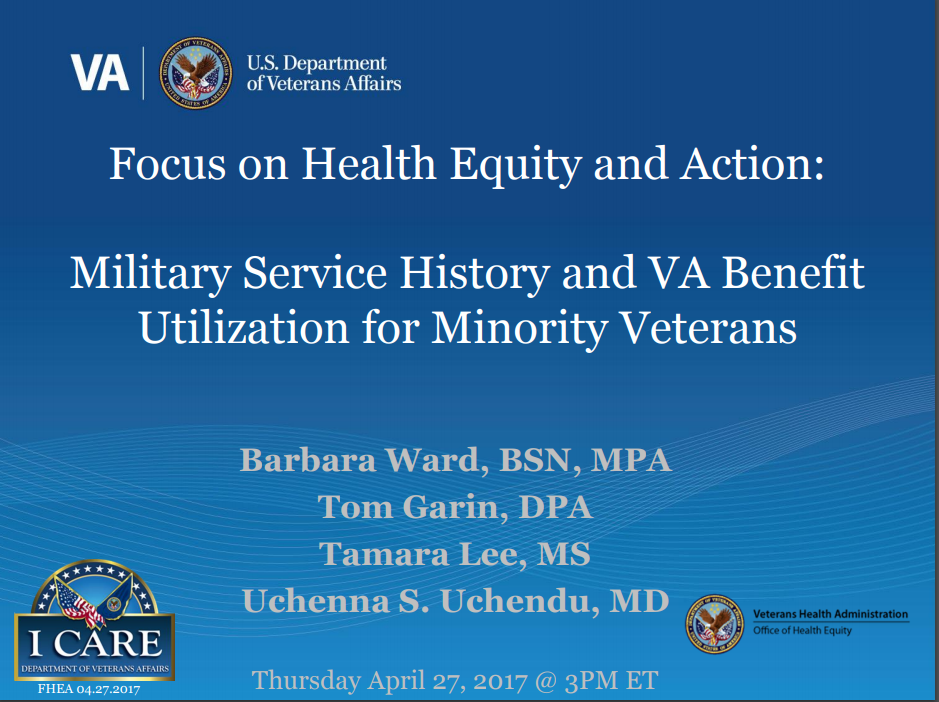 VHA's Office of Health Equity is pleased to partner with the VA Center for Minority Veterans for April’s session in observation of National Minority Health Month. April’s Focus on Health Equity and Action Cyberseminar session spotlights the recently released "Minority Veterans Report: Military Service History and VA Benefit Utilization Statistics" report from the VA Data Governance and Analytics office. This new report increases our understanding of racial and ethnic minority Veterans, their use of VA benefits and services, as well as the impact of military service on their lives post-military. April’s session will: 1) discuss the new report and the role of social and economic determinants of health; 2) highlight VA actions to advance health equity for minority Veterans; and 3) explore additional ways to best to serve these American heroes. 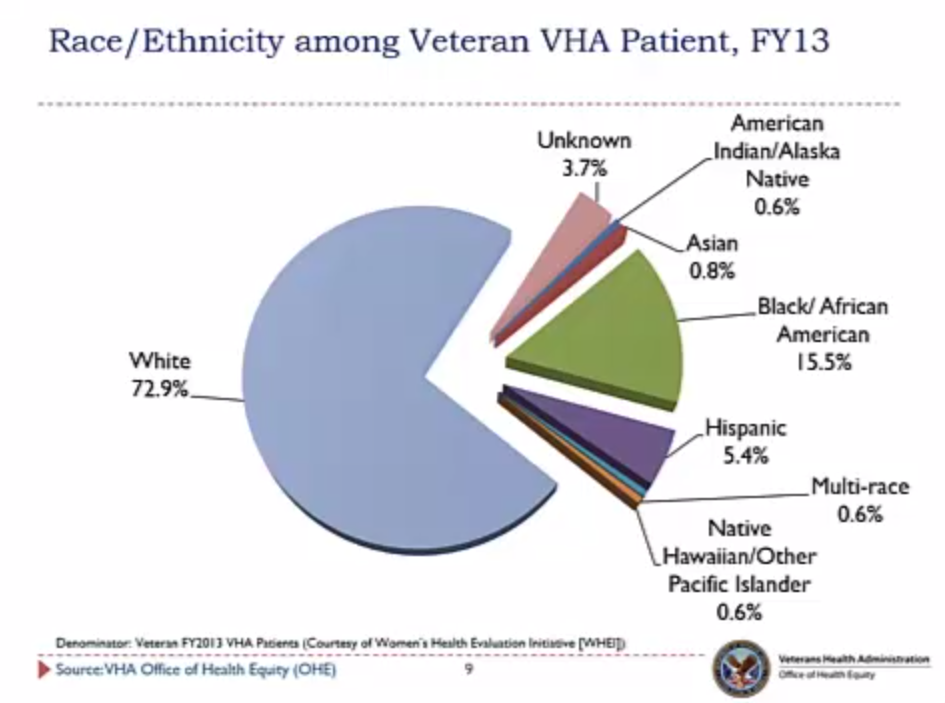 Complete, reliable, and consistent measurement of racial and ethnic background in healthcare is critical for valid health equity and disparity studies. However, despite many efforts, missing data on race/ethnicity are common in VA data. The Office of Health Equity partnered with the Health Equity Research Outreach Initiatives Coin (HEROIC) to explore ways for addressing this gap. This Cyberseminar will share the findings with regard to: (1) patient and provider attitudes, challenges and preferences for how to collect race/ethnicity and (2) statistical approaches to address missing race/ethnicity data in the VAMC. 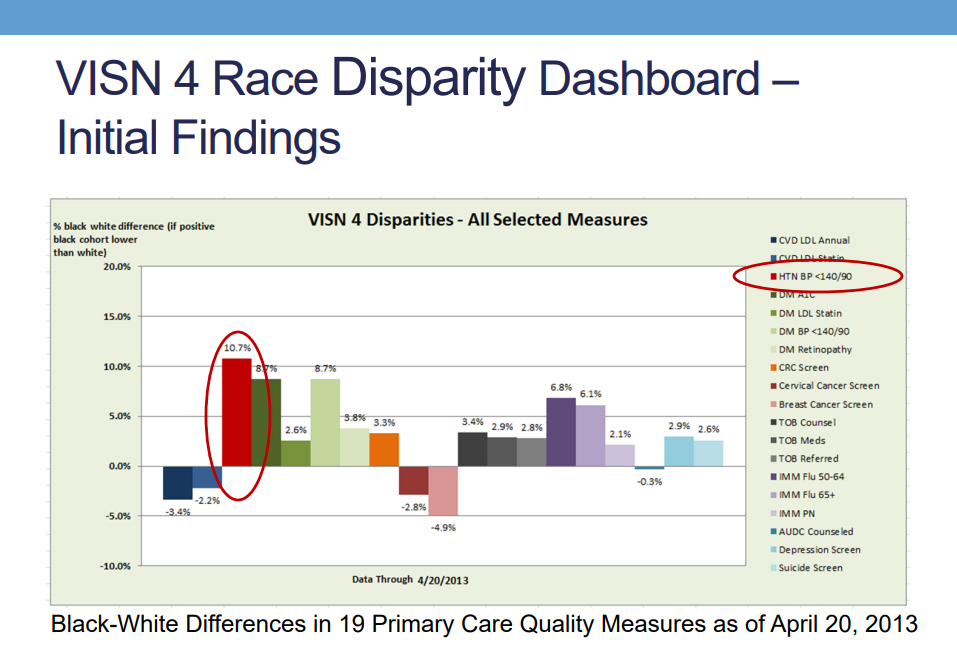 The purpose of the presentation is to share the findings from the evaluation of the VISN 4 quality improvement project to reduce racial disparities in hypertension management. The presentation will 1) highlight the partnership of Office of Health Equity, VISN 4 and CHERP in pursuit of health equity including how the project was conceived, 2) describe the nature and intensity of specific strategies implemented at individual facilities to reduce blood pressure disparities, 3) discuss the barriers and facilitators to implementing specific strategies, and 4) present data regarding the impact of the project on disparities over time. The presentation will conclude with a discussion of recommendations gleaned from the project to guide future quality improvement efforts focused on disparities in health or health care. 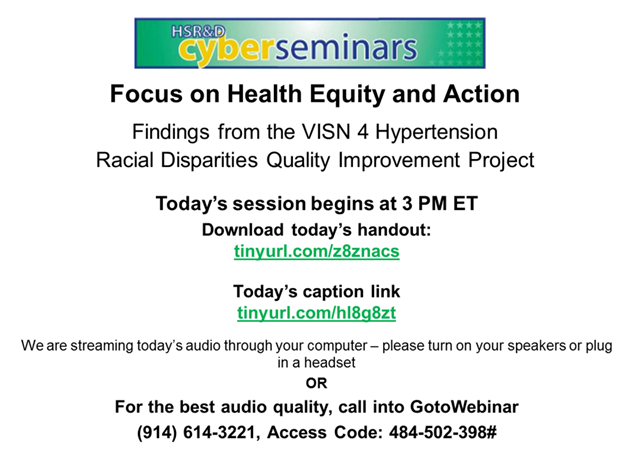 The purpose of this session is to discuss the VA journey and crucial partnerships towards eliminating health care disparities. It will highlight collaborations with examples from VHA Office of Health Equity, CHERP and HEROIC towards this goal. This Cyberseminar is part of the VA Center for Minority Veterans 20th anniversary events.

Did you know that some Veterans, including some racial and ethnic minorities, experience higher rates of hypertension? A VA research team created a series of videos of patients discussing their experiences with high blood pressure and offering tips to take medications, talk to their health care providers, and make other changes. According to the 2016 study, Veterans who watched the videos, compared to those who did not watch the videos, reported greater intentions to:
The Office of Health Equity is pleased to be able to share these videos with Veterans and stakeholders. The short videos below feature stories from Veterans about high blood pressure and important resources. 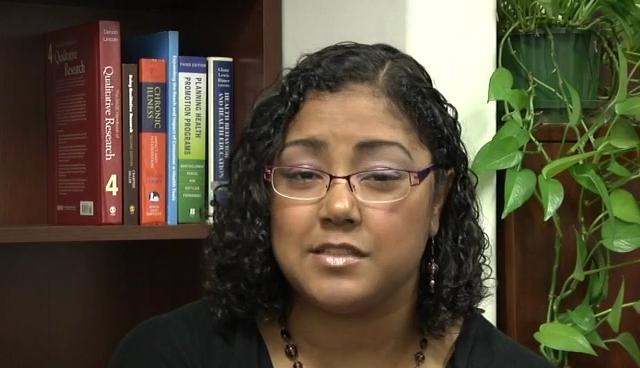 Natasha, an Army Veteran who served for 7 years and worked as a medic, highlights the importance of managing high blood pressure in the African American community. Natasha introduces five African American Veterans who successfully manage their blood pressure. As these Veterans share their stories, Natasha reflects on key factors in their journeys that may help you. 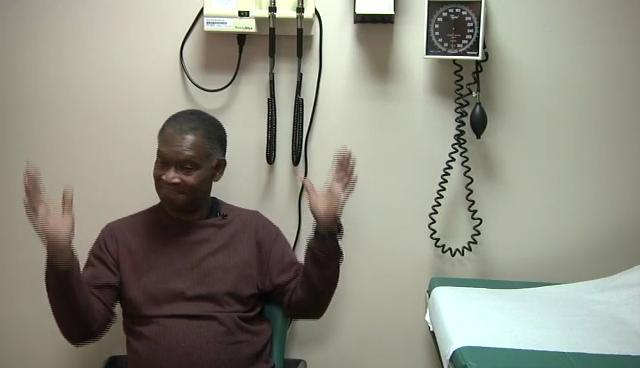 Born and raised in Charleston, South Carolina, Danny shares how the eating habits he developed growing up in the South and while serving in the military lead to his weight gain as a retiree since he no longer exercised daily like a soldier. Eventually, Danny had an episode of blurred vision, was admitted to the emergency room and was diagnosed with high blood pressure. Learn how this Veteran took small steps to get and keep his blood pressure at a normal level. According to Danny, “if you want to live, you can do it.” 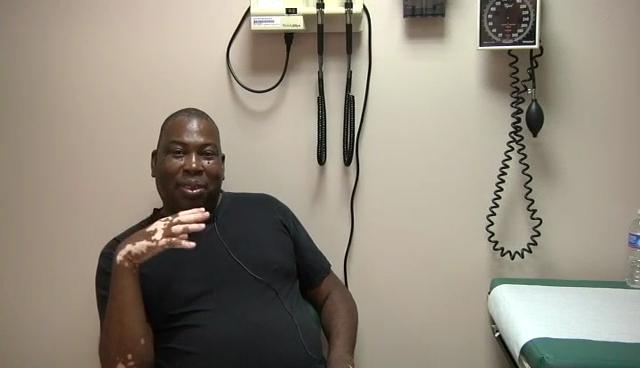 Trained as a U.S. Army artillery gunner, Morris travelled many places during his military career after growing up in the small town of Brunson, South Carolina. As an adult, Morris experienced a four day headache that sent him to the emergency room. He learned he had high blood pressure. His heavy drinking made it difficult to control his blood pressure even with medication. Morris shares how the deaths of close family and friends made him stop drinking alcohol and change his eating habits. Now, he is known as the “food inspector” who helps those close him eat healthy. 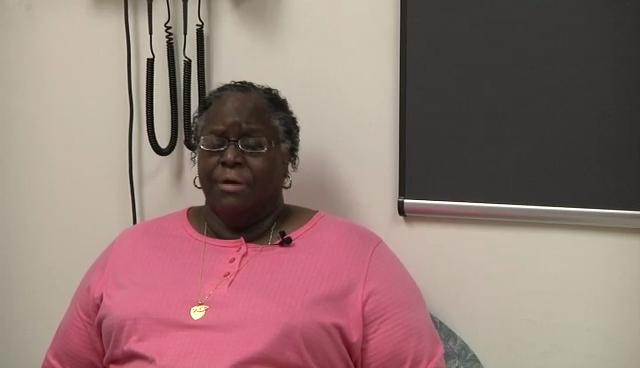 The Office of Health Equity is committed to working closely with our VA colleagues to ensure that Veterans receive appropriate individualized health care in a way that eliminates disparate health outcomes and assures health equity. OHE's VA Partners include:

The Office of Health Equity is committed to working closely with other government agencies and non-governmental organizations to ensure that Veterans receive appropriate individualized health care in a way that eliminates disparate health outcomes and assures health equity. OHE's External Partners include:
Workforce Training

VHA facilities can raise employee awareness of the importance of diversity and demonstrate the agencies commitment to a model EEO workplace by establishing and utilizing Special Emphasis Programs and recognizing Veteran population groups. The following toolkits provide communication resources for VHA facilities to utilize for engagement and increasing awareness of each group. href="https://www.va.gov/HEALTHEQUITY/docs/Heritage_Toolkit_Black_History_Month_February.pdf">African American Veterans

VHA providers share their stories of creating awareness of unconscious bias within their clinical practice and how bias impacts us all. A bias is a tendency. Most biases are natural. However, biases can cause problems when we are not aware of them and we apply them inappropriately to our everyday choices, which can lead to discriminatory practices and result in poorer health outcomes and experiences for patients. The brief videos were created by the VA Office of Health Equity and Employee Education System in an effort to ensure all Veterans receive high quality and equitable healthcare. The videos were recorded April 2013.

The Implicit Association Test measures attitudes and beliefs that people may be unwilling or unable to report. This tool may be especially interesting if it shows that you have an implicit attitude that you did not know about.

The Office of Health Equity, in partnership with the U.S. Food and Drug Administration Office of Minority Health, is pleased to share the Inclusion of Veterans in Clinical Trials video series featuring racial and ethnic minority Veterans describing the importance of minorities and Veteran participation in clinical trials. Clinical trials are an important type of research that determine whether medical products like medicines, vaccines, or devices are safe and effective. It is very important to make sure that diverse populations are included in clinical trials. This helps researchers find out if different populations respond to treatment differently and to make sure the population who would most likely benefit from the medical product is included in the clinical trial. – Video 1, Video 2, Podcast 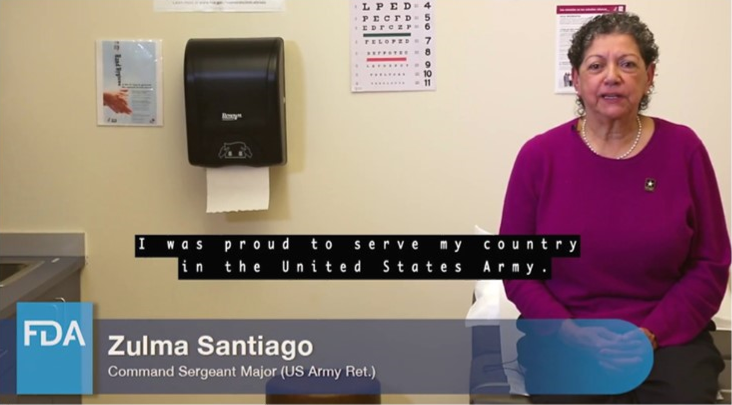