The ultimate goal of Whole Health is system-wide transformation. A Whole Health System fully supports patient-centered care, the care that all clinicians know is important, but that may not always be possible to provide the way we would like because of various barriers. A Whole Health System emphasizes personal health planning, Veteran empowerment, and seamless care by transdisciplinary teams. It is supported by leadership at all levels. While staff member engagement may vary from person to person, the key is to have a critical mass of people at each VA site who are committed to making positive change happen. This commitment is needed at the individual and group (team) levels, as well as at the wider organizational level. It is also vital that Veterans be equally committed to this, as the recipients of care.

The Whole Health Approach can transform care at all levels. At the individual level, it can be applied to each Veteran’s (and clinician’s) self-care. Clinicians are encouraged to prioritize therapeutic presence and support the creation and implementation of Personal Health Plans (PHPs). It does not stop there, however. As an overarching philosophy of care, Whole Health can inform the function of teams, departments, facilities, and ultimately, the entire health care system. VA facilities all over the U.S. are exploring different ways to implement the Whole Health model at a system-wide level.

In fiscal year 2018, 18 VA sites—one from each Veterans Integrated Service Network (VISN)—were selected by VISN leadership to implement Whole Health Systems. These flagship sites, known as the “18 in ’18,” are actively exploring ways to advance Whole Health. In addition to hiring new personnel, they are building on the excellent work done previously by programs like the National Center for Health Promotion and Disease Prevention. More VA sites will be adopting the Whole Health System framework in the near future. 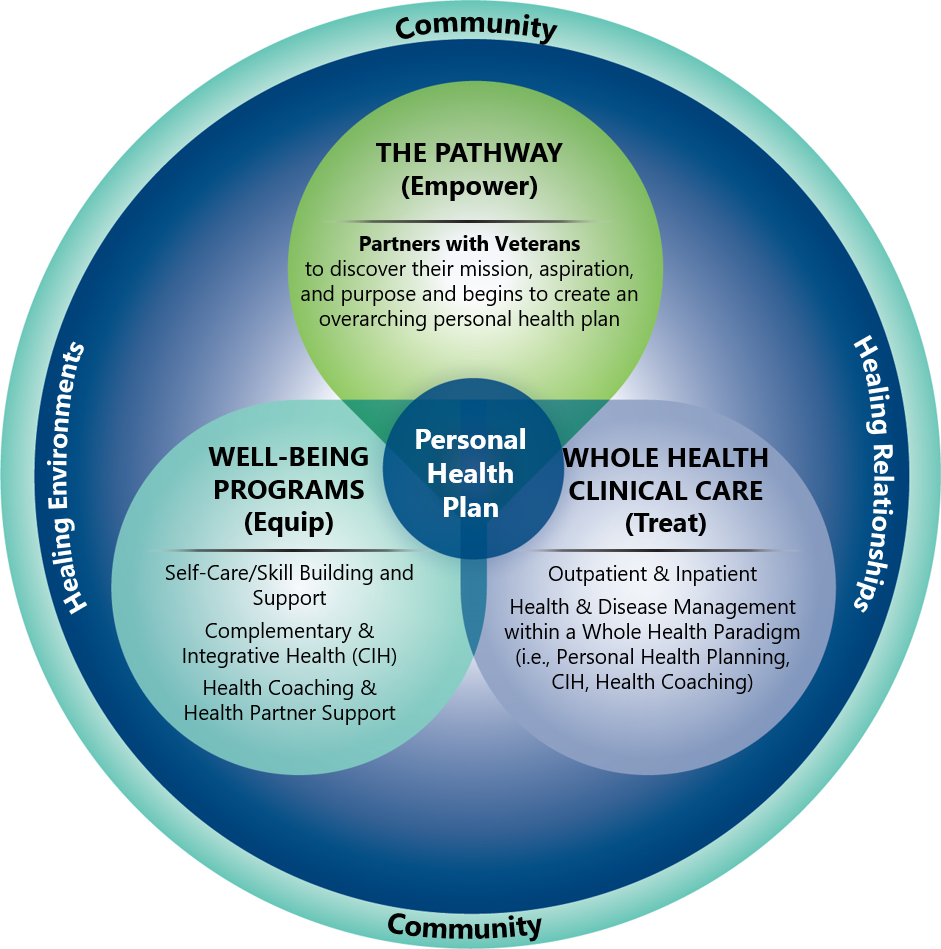 The design of each flagship site’s Whole Health System varies. However, there are 3 key elements that are part of the system, as shown in Figure 1. These elements include:

Bob: The Whole Health System From the Patient Perspective

The overview “Implementing Whole Health in Your Practice, Part I,” introduces Bob, a 68 year-old Vietnam Veteran, and provides an example of what a Whole Health clinical visit could look like for him. What would his experience look like from the broader perspective? That is, how would receiving care in a Whole Health System affect Bob as an individual?

Veterans can be introduced to Whole Health—and the Whole Health System—in a variety of ways. An established Veteran like Bob may first hear about it from one of his clinical team members, through taking a class, or because he asked for more information because of a poster or a website he saw. Veterans who are new to the system might be introduced to Whole Health during a new Veteran orientation program. Others may learn about Whole Health while participating in a VA Well-Being Program, like a mediation class, when the course instructor offers more information. As the VA Whole Health System Implementation Guide notes, “…any of the three Whole Health components/elements may refer a Veteran to one of the other components, and care will flow seamlessly amongst them.”

Once Veterans are familiar with what Whole Health is, they can decide how involved they would like to be with the Whole Health Pathway. The Pathway includes all the potential whttps://www.va.gov/WHOLEHEALTHLIBRARY/overviews/implementing-a-whole-health-system.aspays a Veteran can get started creating a PHP. First, they focus on exploring their MAP and completing a PHI. Then comes goal setting, along with seeking out the education, skill building, resources, and support needed to achieve their Whole Health goals. They may choose to start this process on their own, or to do it with support.

Bob’s highest priority on his PHP was improving his sleep (Recharge). Other self-care areas he wanted to focus on included Moving the Body and Food and Drink. Once Bob knew the general areas where he wanted to focus, he needed to zero in. It was time to learn more details and to experience some of the of options that could support him with implementing his PHP.

Bob sought out programs that could equip him to more fully reach his goals. For example, he was drawn to mindful awareness after the clinician first mentioned it in the Whole Health Visit. He searched for more information online and selected two Veteran handouts to print out: “An Introduction to Mindful Awareness” and “Mindful Awareness Practice in Daily Living.” After reading them, he visited the Multimedia resources on the VA OPCC&CT website and downloaded several audio files featuring guided mindful awareness exercises. After he tried meditating and found it to be helpful, Bob signed up for a meditation class for Veterans, one of several well-being programs offered at his VA. He gradually ramped up to meditating 20 minutes a day.

Bob reviewed the list of other well-being services his VA covered. He signed up for a tai chi class, because he had read in the Veteran handout, “An Introduction to Tai Chi and Qi Gong for Whole Health,” that tai chi could help balance and leg strength. Since his most important goal was to be able to walk his granddaughter down the aisle and dance at her upcoming wedding, tai chi seemed like a good fit.

Bob was also pleased to learn that acupuncture was covered by the VA for treatment of chronic pain. His site offered Battlefield Acupuncture (BFA) sessions, so he signed up. (For more information, refer to the BFA field guide. must have VA access)

Bob was given the option of working with a Whole Health Partner (a fellow Veteran trained in guiding peers through personal health planning) or a Whole Health Coach to help him along with creating and implementing his PHP. He started to meet with a Coach every few weeks.

One of the remarkable things about a Whole Health System is that it helps a person implement a PHP. No one provider was expected to be totally responsible for Bob’s Whole Health; everyone on the team shared responsibility. Because Bob worked with a Whole Health Coach and clearly outlined his goals, it was easier for his clinicians to support him without having to invest a significant amount of additional time.

Over time, as he sought out the professional support he needed, Bob ended up being the captain of a large transdisciplinary team. Every member of the team was committed to Bob’s success. Bob confided to his primary care doctor that it was the first time in his life he had ever felt like his health care team truly cared about him on a personal level.

Bob’s PHP evolved with time. As Bob reached his initial goals—he was able to fully participate in his granddaughter’s wedding, for example—he set new goals to take their place. Every year or so, Bob completed a new PHI and shared it with his team.

Over the next 10 years, working within the Whole Health System, Bob started to find the right combination of self-care and professional care tools to help him with his various health needs. For example:

Many of the elements Bob incorporated into his PHPs over the years were not specifically intended to address one particular problem, and they had an effect on many different aspects of his health. Better sleep, more activity, improved stress management, and increased attention to Food and Drink (along with other approaches to self-care) can have benefits that extend beyond any one medical diagnosis. It was not necessarily that all of Bob’s problems were completely “cured.” Some were, but others did not completely go away. The key was that Bob’s quality of life and overall functionality improved. Whether Bob was cured or not, he experienced healing. He was empowered to take steps that would help him live his life more fully.

Bob received excellent patient-centered care through the Whole Health System. What were common threads that ran through his experience?

Whole Health Teams are vital to the successful implementation of a Whole Health System. As VA sites experiment with implementing Whole Health, clinicians must determine how they can best contribute, based on their training, skills, and scope of practice. Just as patients do when creating PHPs, clinicians must also ask what education, skill building and support they need to be effective Whole Health caregivers. How this looks will vary by person and by profession. For instance, one Whole Health Coach will do things differently compared to other Whole Health Coaches. They will also do it differently from a physician, advanced practitioner, social worker, pharmacist, chaplain, psychologist, dietitian, occupational therapist, or MSA. There is a richness in the diversity of practice styles that come into play.

A Whole Health Team is a transdisciplinary team. Patients are active members of their team. They are the captains, essentially, and they choose the other team members. Bob’s team included his daughter, Whole Health Coach, primary care PACT members, acupuncturist, tai chi instructor, physical therapist, dietitian, psychotherapist, AA sponsor, and pharmacist. A number of his fellow Veterans were part of his team as well.

WHAT WE KNOW ABOUT SUCCESSFUL TEAMS

Over 15 years ago, the Institute of Medicine noted that high-functioning teams with representatives from multiple disciplines were one of the key elements of the 21st–century health care system.[4] While most research related to teams focuses on interdisciplinary teams, findings likely cross-apply for transdisciplinary teams as well. Some of the main research findings related to team-based care include the following:

Your Role in the Whole Health System

3. Who else do you need on the team? It might be helpful to create a list of potential team members. Examples might include: Systems redesign, Clinical Applications Coordinator, Community Care, Health Promotion Disease Prevention Coordinators, and leadership, as well as any of a large number of different types of clinicians (e.g., providers, nurses, mental health, pharmacists, physical therapy, chaplains, social workers, etc.) and people from the community.

Each clinician, staff member, community provider, or other member of the transdisciplinary team will have something different to offer. Consider how your specific skills complement the skills of others on the team. There are a number of ways to build team dynamics, including CREW, TeamSTEPPS, National Center for Organizational Development, Relationship-Based Care, and others.

A Whole Health System is only as effective as the people who are part of it. As more people learn about the Whole Health Approach, “Whole Health care” will become synonymous with “VA health care.” Eventually, people will come to take it for granted that VA care always equates to “good care,” the kind of care that everyone should be receiving. In your role, whatever that may be, you can be an integral part of the transformation to a Whole Health System that offers everyone the best care anywhere.