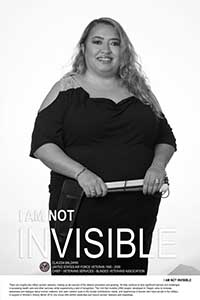 Claudia Baldwin is an immigrant from El Salvador who migrated at age 7 to the United States of America, for better opportunities. She decided to join the U. S. Air Force in 1995 to serve this wonderful country, preserve the right of freedom, and to obtain education benefits. Claudia achieved the rank of Staff Sergeant, however at the age 24, a rare disorder took her sight which led to her medical retirement from the Air Force. Despite becoming blind, she went back to work, and completed her Bachelor of Science in Management degree. She is currently the Chief of Veteran Services for Blinded Veterans Association (BVA), where she diligently helps hundreds of blind veterans receive their VA benefits. She is the proud mother of her only daughter, Claudia. She loves dancing with her husband James, and always has a sense of adventure. She loves to alpine ski, surf, row, and is always looking to experience something new in life. One of her favorite quotes is from her Friend, Army veteran, former Paralympian, Joel Hunt, who said, “Tough times don’t last, tough people do!” 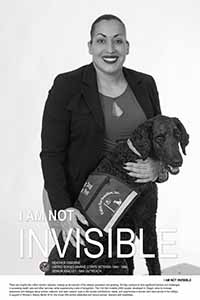 Heather Osborne served in U. S., Marine Corps as a Warehouse Supply Clerk. She joined the military to escape the poverty surrounding her. In the corps, she acquired a work ethic that has driven her to work relentlessly to help Servicemembers and Veterans. Heather is a Senior Analyst with the Benefits Assistance Service Outreach Team and assists with contracting for Transition and Economic Development. She enjoys baking with her son because of the joy it gives her teaching and helping him. She encourages women Veterans to not allow their disabilities to define who they are. People along her journey told her that her profound hearing loss would hold her back, but she didn’t give their words any credence and continued to push even harder. She wants women Veterans to stand-up and continue the good fight, recognizing that your disabilities cannot not be your limitation. Her favorite quote is, “We are dealing with Veterans, not procedures – with their problems, not ours” – Omar Bradley (1947). This quote reminds her to maintain focus on the humanity of what VA does and to keep Veterans at the center of our mission. 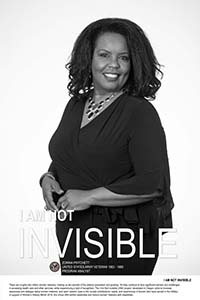 Zorina Pritchett served in the U. S. Army as a Personnel Administration Specialist. She joined the Army to pave a way to attend college and during her service learned many valuable lessons that prepared her for life. One lesson was the importance of leaving nobody behind. Zorina started her life outside the military at the Department of Veterans Affairs (VA), where she was committed to making sure that no Veteran was left behind. During this time, she was a single mom finding it difficult to manage her disabilities, perform her job and be a parent. There were many times she felt like giving up, but the love for her son pushed her harder. Zorina currently serves at the VA as Program Analyst, where she continues to help Veterans. Her passion for serving others and enjoyment of performing arts helps her fight through adversities and achieve a satisfying life. She shared a few words to live by, “Never give up the fight to achieve the best version of you.” 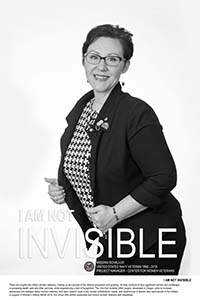 Missina Schallus, is a Retired Yeoman Chief Petty Officer, U. S. Navy and a native of Atlantic City, New Jersey. She is fulfilling her passion for continued service, as a VA employee at the Center for Women Veterans. In this role Missina continues to advocate for and on behalf of women Veterans. Missina’s hope is that is other women Veterans will step out of the shadows and embrace their identify as Veterans and realize how valuable their military contributions are to our nation. Missina is a three-time cancer survivor, who has never lost faith and an avid Philadelphia Eagles fan, but her favorite role is as the mother of three children, whose laughter lifts her soul. Her message to Women Veterans, “the culture is changing” and to all Veterans, “not all wounds are visible, not all Post Traumatic Stress is caused by war, but our wounds bear the same pain. Mental illness must be talked about openly.” Her favorite quote is, “A smile starts on the lips, a grin spreads to the eyes, a chuckle comes from the belly; but a good laugh bursts forth from the soul, overflows, and bubbles all around.” — Carolyn Birmingham