Director
VA Center for Women Veterans - Center for Women Veterans (CWV)
skip to page content
Attention A T users. To access the combo box on this page please perform the following steps. 1. Press the alt key and then the down arrow. 2. Use the up and down arrows to navigate this combo box. 3. Press enter on the item you wish to view. This will take you to the page listed.
Menu
Menu 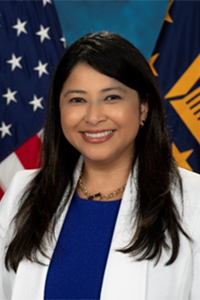 Lourdes Tiglao serves as primary advisor to the Secretary on Department policies, programs, and legislation that affect women Veterans. In addition, she oversees the Center’s activities, which include monitoring and coordinating VA’s administration of health care, benefits, services, and programs for women Veterans; serving as an advocate for cultural transformation (both within VA and in the general public) in recognizing the service and contributions of women Veterans and servicemembers; and raising awareness of the responsibility to treat women Veterans with dignity and respect.

Prior to joining the Department of Veterans Affairs (VA), she was the Global Partnerships Manager at Airbnb’s Open Homes (now Airbnb.org) program, overseeing a globally distributed team and a portfolio of 70+ nonprofit, private sector, and international aid agencies across six continents. She focused on strategy, standards and processes, and strategic partnerships both domestically and globally, while helping to lead the Veterans Employee Resource Group’s (ERG) functional area in engagement.

Her background traverses sectors in the military, federal, and nonprofit organizations, spanning over a decade in leadership roles as mentor, educator, and manager in the US Air Force (USAF) and the nonprofit environment across business, communications, and healthcare.

During her military tenure, she utilized her medical expertise to help save lives during her extensive critical care air & ground transport experience globally on the Critical Care Air Transport Team (CCATT). She deployed to multiple locations including Afghanistan, Kyrgyzstan, Uzbekistan, Saudi Arabia, the Philippines, and others. Her final assignment was in Okinawa, Japan, where she helped launch the very first Critical Care Medical Attendant Team (CCMAT), which provides critical care medical evacuation services. The effort also officially integrated Naval personnel on the team as a joint force effort to serve the Pacific region.

After transitioning from the military, Ms. Tiglao developed her disaster skills with Team Rubicon, a Veteran-led non-profit disaster response organization, deploying with the organization during Hurricane Sandy in New York and Typhoon Haiyan in the Philippines. She later became Team Rubicon Global Strategic Partnerships Officer, connecting the network with government and organizations around the world. A staunch Veteran advocate, she is a former member on the MyVA Advisory Board for the US Department of Veterans Affairs and has sat on several Veteran-focused boards to improve service access for minority Veterans and enhance their lives through the arts. She has spoken on topics ranging from nonprofit management, medicine, Veteran reintegration, humanitarian response, and volunteer mobilization globally, including at the Philippine Embassy, New York and San Francisco Philippine consulates, the State Department, and as a guest speaker by international television networks, universities, and scientific conferences.