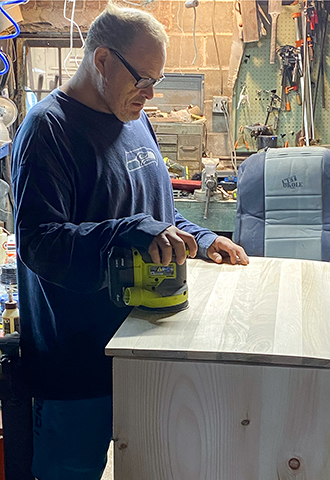 Army Veteran Joe Knight sands a butcher block table, something he could not have done when his pain levels were high.

U.S. Army Veteran, Joe Knight, from West Haven, Connecticut, had started drinking again when he was unable to obtain opiate pain medications to manage his pain. Battlefield acupuncture (BFA) offered relief for the pain and a new opportunity to enjoy life.

At only 50 years old, Knight has experienced joint pain typical of someone much older. For many years, he suffered from debilitating pain due to wrist and shoulder injuries and surgeries. “I was drinking two fifths of vodka a day to numb the pain, probably for 60 days straight. I had been off alcohol for 10 years,” he said. In addition, Knight had developed diabetes and weighed 357 pounds. His drinking also led to a divorce. “My hope was exhausted,” he said.

As a patient at the VA Connecticut Healthcare System, Knight was introduced to BFA, a form of auricular (ear) acupuncture, by Dr. Daniel Federman, chief of medicine. At his first appointment with Dr. Federman, Knight was honest about his pain and what he was doing to get relief. Dr. Federman recommended BFA—Knight wasn’t sure it would work, but he was willing to try anything.

Knight felt immediate relief. “I was on cloud nine. The relief lessened a little each day after, but on Sunday, I realized I hadn’t needed anything, not even Tylenol or ibuprofen for pain.” He began looking forward to his BFA sessions, knowing he would have pain relief for the weekend, and any pain that returned between sessions would be temporary. The sessions were conducted in a group setting with other Veterans, and Knight also enjoyed the camaraderie.

“Now everything has changed,” Knight said. Knight was able to improve his diet, began exercising, and lost 123 pounds. He enjoys gardening and woodworking and provides care for a loved one—all with less pain.

As part of a Whole Health approach to care, many Veterans are finding pain relief through BFA. According to Dr. Juli Olson, chiropractor and acupuncturist with the VA Central Iowa Healthcare System and VA’s national lead for acupuncture, BFA involves placing 5 to 10 tiny needles around the ear, with the theory being that the entire body and all its functions are represented at various points on the ear.

“In traditional acupuncture, whenever you place a needle into the body, it has effects on the tissue right there, plus it has distant effects throughout the nervous system,” she explained. “With battlefield acupuncture, we're not having any local effect because the pain for most people is not in the ear. We're taking advantage of those distant effects,” she said. There may be mild discomfort at the outset, but Dr. Olson said that on average, BFA reduces pain levels by two points on the pain scale, and sometimes more.

According to Dr. Federman, BFA can provide enough pain relief to avoid or reduce the need for prescription medications, which can be addictive. For pain, “I start with traditional topical therapy, physical therapy, Tylenol, maybe nonsteroidals. If that doesn’t help, then I often recommend battlefield acupuncture,” Dr. Federman said.

Dr. Federman says he was once skeptical about complementary and integrative health (CIH) therapies such as BFA. That changed after his own experience with a “comfort dog.” Dr. Federman is a resident of Newtown, Connecticut where the school shooting at Sandy Hook Elementary School claimed the lives of 26 people including 20 children. He knew families who lost children, and seeing their pain was difficult and contributed to his own despair.

“I’d always been an evidence-based kind of guy,” Dr. Federman noted. “But at a vigil, I talked to this woman who brought her healing dog. I petted the dog not expecting anything. And something happened to me I can’t really articulate, this feeling washed over me. I really felt healed. Then I thought ‘Maybe we don’t have to live by evidence-based medicine alone.’”

That experience prompted Federman to start exploring CIH treatments for his patients. He conducted his own study on BFA and its use for Veterans, which found that 82% of participants felt pain relief.

According to Dr. Olson, with the relief of pain offered by BFA and other modalities, a person can begin focusing on other aspects of health that are important. “We find that BFA can be a catalyst to improving well-being overall,” she said.