Messages from the Center 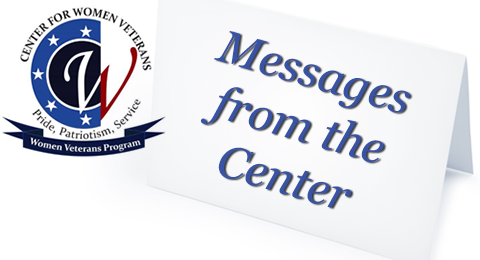 Women are one of the fastest growing subgroup of Veterans, and we are signing up for VA health care and benefits at higher rates than ever before.  However, women frequently report that they feel invisible as Veterans, both within and outside VA.  That’s why one of the core components of the mission of the Center for Women Veterans is to advocate for cultural transformation to raise awareness about the service and sacrifice of women Veterans.  We will share stories of interest to women Veterans and supporters here on a regular basis.  Please check back often, or sign up to receive updates.  Together, we can ensure our voices are heard and our stories are recognized as an integral part of American history.

Celebrating 70 Years of Equal Service and Pay On the Anniversary of the Women’s Armed Services Integration Act [June 29, 2018]

As VA’s National Baby Shower Winds Down, Services for Women Veterans will Continue to Ramp Up [May 15, 2018]

Women Veterans Must Be Recognized says Center for Women Vets Director [May 7, 2018]

Veteran Athlete Credits Sports with Preparing Her for a Career in the Male-Dominated Field [March 29, 2018 - Guest Blog]

Breast Cancer Awareness Should Be a Year-Round Effort for Women Veterans [November 6, 2017]

#BeThere:  Committing Yourself to Prevent Suicide Among Women Veterans [September 18, 2017]

A Look at Some of the VA Programs MST Survivors Chose to Help Them Recover [May 2, 2017 - Secretary’s Blog]

ICYMI:  Looking Back on VA’s Month-Long Celebration of Women Veterans and Their Contributions to the Nation [April 3, 2017]

Center for Women Veterans Announces 10 Artists Whose Work will be On Display at VA Medical Centers Across the Country [February 7, 2017]

SOWV:  Know when to apply for disability compensation [September 7, 2016]

The Importance of Capturing the Stories of Women Veterans [September 1, 2016]

Serving as the New Director of the Center for Women Veterans [May 16, 2016]

This page may contain links to pages and/or documents outside the Department of Veterans Affairs Domain.  These are annotated as shown below.  We hope your visit was informative.

U.S. Federal/Military Sites — You will leave the Department of Veterans Affairs web site by accessing links annotated with this graphic.

This page may contain links to pages and/or documents outside the Department of Veterans Affairs Domain.  These are annotated as shown below.  We hope your visit was informative.

Non-Government Sites — You will leave the Department of Veterans Affairs web site by accessing links annotated with this graphic.  VA does not endorse and is not responsible for the content of the linked web site.